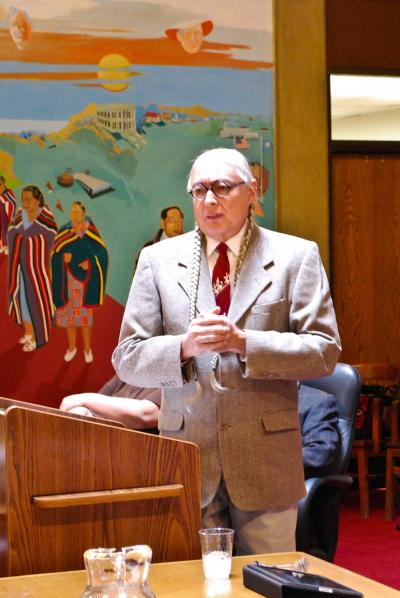 A proposed University of Tulsa College of Law project is aiming to expand its Indian law program.

The Worcester Sovereignty Project, a program that seeks to provide opportunities for Native Americans to learn Indian law, was being proposed to the Second Osage Nation Congress Nov. 15 during its 11th Special Session.

“This is probably the most single important development in the field of Indian law education for our part of the country,” said Walter Echo-Hawk.

The project could help Native attorneys defend their people, he said. Echo-Hawk developed the project along with other TU officials after joining the school over a year ago as an adjunct faculty member.

“Shortly after I came on board, (TU College of Law Dean Janet Levit) asked me to work with the administration, and the staff to develop or expand under her leadership, significantly expand the existing Indian law program,” Echo-Hawk told the Congress. He said brainstorming for the project took about six months.

Echo-Hawk said the Worcester Sovereignty Project would create a scholarship program to offset the incurred debts for the Native law school students who can rake up $80,000 to $90,000 in tuition bills. He said an advantage to having the program is to keep students interested in pursuing Indian law opportunities because some law students end up working in cities with no Indian law opportunities to pay back the student loans.

Echo-Hawk said the project also features a field studies program to provide externships in Indian Country so law students “would leave the school and work for Indian nations under the supervision of attorneys for law credit, it wouldn’t cost the tribes anything, but it would give the students excellent on-the-ground legal experience . . . and not just to handle divorces or (last) wills, but practicing federal Indian law.”

The program would also offer a “sovereignty law clinic” which involves hiring Indian law practitioners to come and help supervise the law students working on the sovereignty issues, Echo-Hawk said. “This would be a proactive part of the program,” he said noting that TU is a private school, so the law school is not beholden to the state of Oklahoma in case of future litigation, which could create a conflict of interest if TU was a state-funded school and the state was involved in a case on the opposing side.

Echo-Hawk said he would be visiting with the remainder of the state’s tribes to present the project as he did to the ON Congress to raise awareness and to ask for donations for the Worcester Sovereignty Project.

The Congress took no action or motions regarding the Echo-Hawk presentation after it concluded. The presentation came at an inopportune time when the Congress voted to end the Special Session after four days during the session as the Legislative Branch and Treasurer William Kemble were at odds over the Nation’s appropriation law for approving tribal funding requests.

“According to the Treasurer, this week we’re broke, but next week, it might be a different story,” quipped Congressman William “Kugee” Supernaw. The Congress is scheduled to begin a 12th Special Session on Dec. 5 to finish much of the items left from the 11th Special Session.

Congressman Geoffrey Standing Bear praised the presentation by Echo-Hawk and William Rice (UKB Cherokee), also a TU law professor. “These two gentlemen are giants in Indian law, nationally and internationally . . . Our people have to remember that this money from gaming, license tags, smoke shops . . . that comes from these victories that have been won by Indian attorneys in the last quarter-century . . . It looks like now we need to think about the future.”

Congressional Speaker Jerri Jean Branstetter said the project presentation may be a future topic for the Congressional Committee on Education.

TU is the largest major university with a law school that is closest in proximity to the Osage Nation.

Walter Echo-Hawk is wondering whether the Indian law profession is dead.

In a presentation to the Second Osage Nation Congress Nov. 15 during their 11th Special Session on an Indian Law program at the University of Tulsa, the veteran Native attorney told the congress that it’s never been more vital for Native nations to have attorneys with knowledge of Indian Law.

“The court observers tell us that since 1985, Indian nations have lost over 80 percent of their cases that come before the Supreme Court,” Echo-Hawk said. “That means that prison inmates fare in the U.S. Supreme Court than our Indian nations do . . . it’s led some of our worried legal scholars and tribal leaders to ask: ‘Is federal Indian law dead?’ . . . That’s a challenge that I think this next generation of our attorneys are going to have to address.”

Echo-Hawk (Pawnee), an adjunct faculty member at TU and an attorney at Crowe Dunlevy in Tulsa, notes most of the Indian law-related cases appealed to the U.S. Supreme Court with the two most recent Chief Justices presiding were decided against the Native American side. Chief Justice John Roberts has presided since being nominated by President George W. Bush in 2005 after his predecessor, William Rehnquist, nominated by President Ronald Reagan in 1986, died in office.

Echo-Hawk describes the case loss record as “a very troubling legal trend toward trimming back on our Native rights.” He also cited, as an example, the recent High Court decision to not hear the Osage Nation’s appeal in its reservation status case against the Oklahoma Tax Commission.

The federal case against the state Tax Commission started 11-years-ago when the Nation sued the OTC for taxing Osage citizens living on land that the Nation claimed was still, and had always been, reservation land, also known as the boundaries of Osage County. Since that time the case has been to the 10th Circuit Court of Federal Appeals twice, in which the federal court denied to hear a rehearing of the Nation’s case. The Nation appealed to the Supreme Court in October 2010 and the justices declined to hear the case on June 27.

Echo-Hawk said he has also noticed a change in the challenges tribal nations are accepting in taking on more efforts to sustain their governments and economies.

“Many tribes, and I think Osage is one of them, find themselves in unchartered territory. We’ve got brand new issues we’ve never confronted before, running these big casinos, labor relations and floating bonds and all kinds of things that go far beyond the field.”