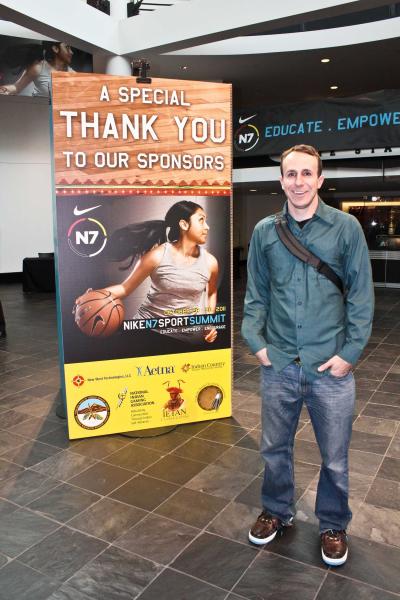 Four hundred health and wellness officials and sports enthusiasts gathered at the first-ever Nike N7 Sports Summit in Beaverton, Ore., held at the Nike World Campus on Oct. 28 to Oct. 30.

The summit was organized by Nike N7 to better educate and provide tools for Native communities to better the lives of communities through sport and creating positive change.

The three-day summit featured panels with Native American athletes, community health leaders and more.  It was open to anyone and everyone with an interest in revamping or starting up health programs in their Native and Aboriginal communities throughout the United States and Canada.

The Nike N7 is an organization committed to bettering Native American and Aboriginal communities in the US and Canada with positive change through sport. Grants are created and made available for the communities to apply for through the Nike N7 products sold worldwide. The profits gained from the sales are thrown into a fund that is funneled into grants that the Nike N7 board awards.

Within the first day the summit reached capacity of 400 participants and had 200 people on a waiting list.

Aside from the panels, N7 provided a variety of entertainment, catered meals and gifts. Each participant was given a free pair of Nike N7 LunarGlide +3 running shoes from the 2011 Holiday Collection, a Nike N7 string bag, a Nike N7 water bottle and a Nike N7 notepad and pen.

Attendees were also given a private tour of the Nike World Campus and a three-day pass to the Nike employee store where exclusive Nike products could only be purchased by Nike employees.

Moira Red Corn, who was also in town on NB3 Foundation business, said the event proved to show promise based on the attendance alone.

"It’s very exciting to have such a well orchestrated production and I think that it’s just really first class, I don’t think there’s any other way to say that,” Moira Red Corn said. “It’s stunning really, it’s a fabulous location, Portland’s a wonderful city, Nike’s got all kinds of clout behind it, the atmosphere that they’re building off partnerships, just discussing with other people . . .”

Ryan Red Corn said he thought the conference was a typical inaugural event. He said overall the event was well done.

“The conference is in its infancy, to expect it to be hitting on all cylinders as far as their goals and missions would be foolish, as an inaugural conference I know they got to capacity, they got to capacity pretty quickly, which means that there’s demand for that, I bet you the conference probably increases by at least 33 percent next year if not larger,” he said. “The goals of the conference which is basically to reduce diabetes in Indian Country and the ideas behind it are valid and strong, it’s just going to take a awhile for them to best practices type of things to emerge and also leaders in that field to gravitate toward that conference. There obviously [are] a lot of conferences going on, health wise, that are a lot more academic or professional that have to do with diabetes, it’s just going to take a while for those partnerships to emerge, you’ll probably see that starting next year and on into the future.”

Nike N7 started more than 10 years ago when Sam McCracken, Assiniboine/Sioux and general manager of Nike N7, who worked his way up as a warehouse worker in one of Nike’s distribution centers, became the manager of Nike’s Native American Business.

In his position McCracken formulated a business plan that was geared toward Nike building relationships with 250 Native American tribes/nations that receive grants for diabetes education.

Now the fast growing organization has the best Native American athletes who serve as ambassadors for the organization.

In 2009, N7 expanded their operations by incorporating an 11-member board that includes Osage lawyer Wilson Pipestem.

Moira Red Corn played college rugby at the University of Oklahoma, played on the Women’s National Rugby team and was inducted into the Oklahoma Rugby Hall of Fame this year.

She said she understands how sport can change lives and how an organization like N7 can help to do that.

“I’ve had a long-term relationship in sports just in general, as a doctor, that’s just what I do on a day-to-day basis, I work with kids who are really troubled, suicidal, very sick. To me it’s important for me to allow them to create a future because that’s not what they’re seeing right now,” Moira Red Corn said. “That’s what I try to do, and have them feel heard, have them be empowered even if it’s just in the smallest way, that’s what I do for a living.”

With the help of organizations like the Nike N7 Fund, in the near future all Native and Aboriginal communities can have the tools to better empower Native youth.