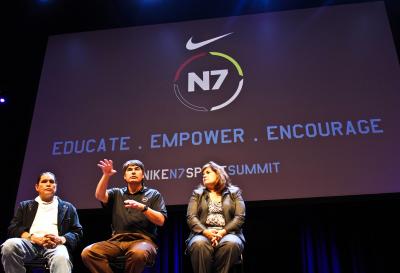 Two years ago Wilson Pipestem stood in the middle of Notah Begay III’s living room and shook hands with Sam McCracken, the visionary of the Nike N7 Fund.

Pipestem was looking to help the Native youth, McCracken was looking for an innovator for the rapidly growing Nike N7 movement, and Begay was there to bring them together.

“I was visiting Notah at his house and his Nike guy (McCracken) was there . . . so Sam, he (Notah) and I hit it off immediately,” Pipestem said. “All of us had a great passion for sports and particularly Indians in sport.”

That passion has led the three and others to be the movers and shakers of the Nike N7 movement, a movement that strives to fight the battle against diabetes and obesity in Indian Country by selling the Native American Nike line, “Nike N7,” and turning the profits from sales into grants for health and wellness programs throughout the United States and Canada.

The three recently reconnected at the first ever Nike N7 Summit held in Beaverton, Ore. Oct. 28-30. The Summit was a three-day event jammed with panels and discussions on how Native communities can bring health and wellness programs home through the Nike N7 Fund. Pipestem was a panelist in a number of panels.

With that handshake in Begay’s home in 2009, Pipestem became a member of the Nike N7 board, a board of 11 that includes professional Native American athletes, a country singer and the president of the National Indian Gaming Association.

Pipestem, Osage and Otoe-Missouria, a Washington D.C.-based lawyer, ran track for Oklahoma State University and has always held a place for Native Americans in sports.

Pipestem said when the opportunity came he jumped on it.

“Indians in sports was always something that fascinated me, the Hominy Indian football team – the professional football team that used to be on the Osage reservation – hearing stories about different Osages and Otoes who were athletes, that was always fascinating to me,” Pipestem confessed. “So being able to be a part of that and having a very tiny part in the tradition of Indians in running . . . it’s just something I’ve always been drawn to because it’s part of who I am, it’s what I love to do.”

His relationship with the Nike N7 Fund and movement actually began years ago, before Nike N7 was created and before Pipestem became the renowned person he is today.

After graduating from Oklahoma State University Pipestem fulfilled his life-long dream to attend Stanford Law School. His father and his desire to help his Osage and Otoe people and Natives everywhere geared him to study law.

When Pipestem started law school at Stanford University, Begay was a sophomore undergrad. Once they met they connected immediately.

“We had an Indian basketball team we played on, we used to go shoot pool all the time, we just got to be very good friends,” Pipestem said. “We used to talk about sports, what sports meant to us and our communities and how we could make change through sports and we always talked about all these guys who were great athletes that just never quite panned out to be college, or beyond, athletes.”

The two kept in touch over the years and continued in their own paths. Begay, who is of San Felipe Pueblo, Isleta Pueblo and Navajo descent, made noise in the PGA world as he became the only full-blooded Native American on the PGA Tour and Pipestem, who co-founded Ietan Consulting, a successful law firm in Washington, D.C.

Pipestem said he was surprised but thrilled when in 2009 Begay called and asked him to be on the Notah Begay III Foundation board and the chair.

“Notah is a really smart guy with smart ideas, I thought, ‘that sounds like a lot of fun, that has been a great experience,’” Pipestem said. “We’re the only organization now that seeks to have measurable results and sustainable programs and very proud of the work that we’re doing.”

As the chairman and board member of the NB3 Foundation, Pipestem is also behind the scenes of the Notah Begay III Foundation Challenge, where some of the best female and male golfers including Notah’s close friend Tiger Woods, come together, play a few holes of golf to help raise hundreds of thousands of dollars for the NB3 Foundation.

The Foundation itself is a nonprofit organization founded by Begay, that uses sports, health and leadership programs to help fight type 2 diabetes among Native American youth, according to the NB3 Foundation Web site.

Pipestem is often seen shaking hands and visiting with Woods and others at the challenge held in New York State every spring.

Pipestem believes in the work that Begay does with his foundation but those like Begay and McCracken believe in what the 42-year-old Pipestem can do for their organizations.

Begay said when McCracken decided to put a board together for the foundation in 2009 he asked Begay if there was anyone he knew. Begay said he was quick to suggest Pipestem and arranged a meeting at his home in 2009.

“Wilson, it seemed to be just a great fit to the both of us (Begay and McCracken),” Begay said. “We developed that friendship in the early 90s, he went on to start his practice in D.C. and I went on to the PGA Tour. We came to a point in our lives about five years ago where we both felt like it was time to give back to something that meant a lot to us in our Native communities.”

Begay said for about 12 years he and McCracken have discussed ideas like the ones that led to the Nike N7 movement. He said in the middle of it all Pipestem’s name always seemed to come up.

“That’s when I asked him, I think he’s a tremendous asset to the N7 movement. He’s very intelligent, articulate, a successful person, very grounded,” Begay said. “What I find most valuable about Wilson has nothing to do with law . . . what I feel is most valuable is his love for Native people, more importantly his own Osage community.”

Jumping onboard the Nike N7 movement was practically a dream come true for Pipestem.

As a past college athlete and avid runner, Pipestem has always been on the look out for talented Native American athletes.

“I grew up going to Indian sports stuff and I always kept track of Jim Thorpe, he was my hero and I always heard about Billy Mills . . . if there were professional Indian athletes I always followed them and kept track, and that’s when I first heard of Notah, he was this kid who won everything in New Mexico and was the highest ranked junior golfer in America when he was 16-years-old,” Pipestem said. “My motivation for doing it, was one, I could hang out with my friend Sam McCracken but also to be on the ground floor of something that’s potentially a really big deal.”

For about two years now Pipestem has been front and center when it comes to deciding who gets the grants from the Nike N7 products sold.

McCracken said he knew Pipestem would be a valuable asset to the board because of his strategic thinking and energy.

And so far, Pipestem has done just that.

McCracken said Pipestem was part of the initial “brain child” behind the Summit. He said Pipestem grasped the concept of the summit instantly.

“What you see here is not just a birth of my idea, but it’s birth from the passion of a group of people and Wilson being the catalyst of those people to make this what it is today, the energy here . . . you can’t measure it,” McCracken said.

A part of something big

Pipestem is a man who likes to lend a helping hand.

He helped his Osage people win a $380 million settlement in October, he’s helped other tribes fight for justice and helps Native people everywhere as a board member for both the NB3 Foundation and the Nike N7 Fund, but even someone as well known as Pipestem has to pinch himself every now and again.

He said sometimes he can’t believe he’s worked with such people like Woods and Begay.

“I first met Tiger Woods at the Native center on the Stanford campus when he was a scrawny freshman following Notah around, he was already a celebrity when he started school there, he was quiet I remember, he shook my hand, I remember he was a skinny guy,” Pipestem said. “Then he became the Tiger Woods star, he’s still one of the sought after athletes in the world and because of his close, close friendship with Notah I’ve had the good fortune of being at the charity tour we put on and having him shake my hand and say, ‘hey Wilson, how you doing?’

“It’ s a lot of fun, it’s kind of a thrill to be around some of these athletes, they’re just unbelievable, interesting thing is they like Notah a lot. Being around athletes like that is kind of fun,” he added.

The athletes like Begay also enjoy being around Pipestem.

Begay said Pipestem has a sense of energy about him that makes him easy to get along with.

“He is well respected, he’s got a great sense of humor, he loves to laugh, to joke, attends and watches a lot of sporting events,” Begay said. “He’s a very fun guy to be around.”

Now that N7 has been a big part of Pipestem’s life he said he couldn’t imagine his life without it. He said although his work with the NB3 Foundation and the Nike N7 Fund can be time consuming, it’s all worth it.

“This makes my life better. I just love being a part of it, I love the idea that we’re playing some role, in some kid’s life that wouldn’t otherwise play, have that opportunity to play soccer, maybe live a more healthy life, that stuff is what I love. I love doing work with tribal government and I love doing Indian rights work but this is different then that and I just love being involved with Indians in sports,” he said. “I wouldn’t have it any other way, I’d miss it so badly if I couldn’t be a part of it . . . it has kind of been a blessing to be a part of it.”