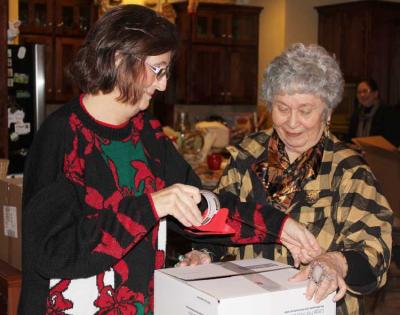 Some boxes were filled with everyday items like tooth brushes, sunflower seeds, magazines and beef jerky and somewhere at the bottom was a small packet of Pizza Hut Crushed Red Pepper.

“My daughter (an Air Force veteran) said they (soldiers) like these,” Margie Burkhart said, as she held up a packet of the peppers. “I guess it was just the thought that someone sent her something.”

Whether it’s hand warmers, a coffee mug or a peppermint mint, more than eight Osage Warriors (active military men and women) will be getting Christmas care packages from the Gray Horse War Mothers this year.

The women spent the last six or seven months preparing the packages and spent Nov. 30 at the Elsberry home putting the packages together, ready to ship off to the Middle East.

Burkhart, from Tahlequah, said the women volunteer with a lot of veteran activities but wanted to do something for the active soldiers this year.

“We just kind of want to give back to them and let them know that we appreciate them and everything they’ve done for the country,” she said. “And hopefully this kind of conveys a little bit that we’re thinking of them.”

The women placed cardboard boxes at four Osage Nation offices and the one that got the highest traffic and donations was at the Osage Nation Tax Commission.

Burkhart said as she helped fill the boxes with goods donated she couldn’t help but think of what it felt like to watch her children, Scott Lowe (Navy) and Lauren Lowe (Air Force) leave and serve their country.

“Mine was in the Navy . . . I was just thinking about how he was so young,” she said. “When she (Burkhart’s daughter) left she was probably about 19, that was the saddest, sending her off and she was so young, I was just so frightened for her.”

The boxes will first go to Osage military men and women then any boxes left over will go to Pawnee and Otoe members. Anything else left will go to anyone else serving in the Middle East.

Paula Cedar Barclay, from Pawhuska, said as she helped fill the boxes she thought about the veterans in Chilocco who lost their lives in the Korean War and about how she pushed her son into the military.

“Chilocco was known for the 45th Division, boys sent to Korea, and we lost a lot of our boys in Korea, I had really close friends that were in the military . . . ” she said.

“I just geared my son toward the military when he was a little boy . . . that’s how I became interested, through the vets coming to Chilocco.”

The packages sent will take weeks to arrive and every item in each box will have to go through inventory for U.S Customs and Border Protection.

If all goes smoothly the recipients will receive the packages by Christmas.

Mary Elsberry, a War Mother, who volunteered to inventory the packages, said she was glad to be a part of the effort.

“I just think this was a way we could show them a little honor and respect, show them we appreciate what they’re doing,” Elsberry said. “Being selfless makes me feel good, to help somebody.”

She said as she helped put the packages together she thought of her son Loren John Kampley, an Army veteran. She said she thought of his first Christmas away from home and how care packages weren’t sent back then.

“Thinking about my son when he was away for the first time, it would have been nice if someone would have sent him something. I was thinking about all the family members that have served, we respect them,” she said. “(I hope they) get a big smile and good feelings inside, and (know) somebody cares about them.”