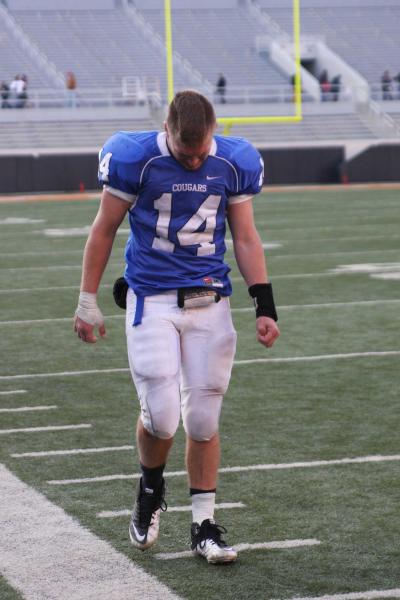 Just about everyone in the small town of Fairfax remembers that cold winter day in 2010 when the Woodland football team won the school’s first state championship title.

But that’s not what the 31 Cougars and their coaches want you to remember.

They want you to remember the number 27 – the number of straight wins Woodland had before they lost the state title at Oklahoma State University Boone Pickens Stadium on Dec. 10.

They want you to remember how the small school of about 400 students put Fairfax on the map.

“Everybody remembered the year we won state but losing a state championship to a seven-point game knowing you could have done something a little bit better, knowing if this thing went right that you could have went and repeated it,” Woodland senior Patrick Bartlett said. “Winning the first state championship was awesome because no other team at Woodland has ever done that, and so being a part of that, being one of the leaders on that team, it was one of the greatest feelings, but coming back into it we figured we had it and we wanted it so bad but they were a great team and there wasn’t much we could do about it.”

The Cougars did all they could.

They fed Osage running back Willie Zackery the ball every chance they could. They built the strong defensive line that got them 13 wins before the big loss and they kept a winning coach who never thought he’d return to coaching after hanging up his whistle about five years before the 2010 season.

To some, they had it all. But in the end it wasn’t enough.

Woodland entered the championship game with a 27-game winning streak that started last season and an undefeated record of 13-0 this season.

They had experience playing in the title game, Wayne didn’t.

An eager Wayne was first to get on the scoreboard with a touchdown with 3:17 left in the first quarter. Wayne quarterback Sam Martin inched his way to the end zone to put the Bulldogs up 6-0 and Woodland was able to block the kick.

Seconds later at 3:03 left in the quarter Woodland followed with their own touchdown when Zackery finished a 63-yard run to put the Cougars on the board.

With 33 seconds left in the first quarter Wayne senior Tailback Josh Way charged his way into the end zone to put the Bulldogs up 12-8. Wayne added a two-point conversion to lead Woodland 14-8 to finish up the quarter.

It was a game of Ping-Pong between the two that left Woodland feeling irritated.

“They scored first and our offense got in their head that we could do the exact same thing and then Willie takes it 70 something yards, from then on it was just back and fourth . . . every time they did it we knew that we could counteract with it, we were catching up from the one touchdown at the beginning of the game,” Bartlett said.

Woodland was the lone scorer in the second quarter, when Zackery found a hole in Wayne’s defensive line and ran the ball 44-yards near the end zone. Edwards scored a touch down for the team and Woodland senior Austin Franks followed up with a 2-point conversion to put Woodland up 16-14 at the halftime.

It was a tough first half and the second half didn’t get any easier.

Woodland hung in the game, allowing Way to slip into the end zone again to lead the Cougars 20-16 at the end of the third quarter.

Zackery said the coaches told he and the team to stay focused but it was hard to stay positive with a player like Way, who had 41 carries for 284 yards, on the opposing team.

“He told us stay focus, if we stay focus we can shut them out and our defense, we knew he (Way) was gonna score points, we knew it was going to be like he told us to stay focused and play our defense,” Zackery said. “If you’re winning you just want that other team to put their heads down and give up, if you play a team and they’re winning, they just don’t give up, you just get annoyed and we didn’t want to give up.”

The Cougars didn’t give up in the last quarter.

The two teams both scored twice more before Wayne closed the game 35-28 to win their school’s first state championship title.

Woodland coach Sindelar said his team might not have gotten the win they worked all season for but they finished in typical Woodland fashion-with their claws out.

“Josh Way . . . containing him was very tough and they got 35 points on the board, they’re big, they’re bigger than us, their more physical than us and they got speed with him, so it’s pretty hard to contain him, we did a good job defensively, but still he just wears you down after awhile, offensively, we had things working in, we scored 28 points and once again it’s a physical mismatch, you can look out there with the size and the speed of the game and it’s a physical mismatch, I think more than anything I think it just shows the character of our kids, to fight back continually,” Sindelar said. “Those kids got so much heart, you saw them get on to the ground a zillion times try to come back and win this game and they were just resilient about trying to continue to come back and win a game, a lot of tears up there but there’s just a lot of pride, very proud of them, they obviously don’t go down hard that’s for sure, that’s why they’re undefeated for two years coming in here, no matter how they were stretched they still got up and came up and still tried to win the game, that’s their nature, that’s their heart.”

The Cougars may not have left Boone Pickens Stadium with another golden football trophy but they did leave with a lot more respect.

Zackery said the team had a sloppy start to the season and many didn’t think they’d be the team they were last season, especially after losing a handful of seniors to graduation.

“We had a lot of young people, I didn’t expect us to be that good, so I’m very proud of them . . . once you start winning you don’t want to lose and that’s what our mentality was, we don’t want to lose, then we decided we want to win a state championship but we came up a little short,” Zackery said. “I ain’t gonna lie, I want to be a two-time state champion, I’m a little disappointed but I’m also just proud to even get there two times in a row.”

So is Sindelar, who was absent from coaching for about five years before stepping in as the Woodland coach after the initial coach resigned two weeks before the season last year. He said the team has given him something to look forward to each season, and he added that his team has nothing to feel bad about.

“The season was great, only one team in the whole state gets to end on a winning note and I just don’t want this to tarnish this season, they were undefeated coming into it and it’s just a tribute to them, it was a great season, lot of fun, one of my bests, I will never forget it,” he said. “They’re champions to me, they don’t feel like it right now but they’re champions to me.”