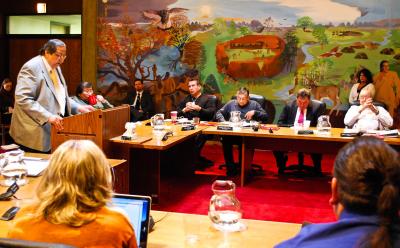 Osage Casinos are now authorized to borrow money from other lenders rather than dipping into the Osage Nation’s coffers.

The Second Osage Nation Congress voted 6-4 to pass ONCA 12-18, which authorizes the Gaming Enterprise to seek a loan up to $27.1 million from a banking institution for Osage Casino expansion projects. The bill’s approval came on the final day of the 12th Special Session.

According to ONCA 12-18 (sponsored by Congressman Raymond Red Corn), the bill authorizes the Nation’s Gaming Enterprise to borrow up to $27,161,000 from a lending financial institution approved by the Gaming Enterprise Board before the end of 2012.

The legislation considered does not disclose which Osage Casino properties are targeted for expansion, but the special session discussion mentioned the Ponca City and Skiatook casinos would be focused on. The casino expansion comes months after federal officials approved the land-into-trust applications for those two casino properties and the Tulsa casino.

The Congressional decision on the casino expansion loan comes after special session debate and discussion concerning the loan terms, which includes a sovereign immunity waiver clause, attached to any agreement considered by the Nation and its Gaming Enterprise. The Congress considered three legislative bills authorizing the loan, one of which proposed that the Nation loan the Gaming Enterprise the $27.1 million from the Nation’s reserves.

Red Corn filed an initial copy of ONCA 12-18 on Dec. 9. He requested the bill to be fast-tracked for a vote during the Dec. 12 session. Not all of the Congress members approved and the bill was sent to the Congressional Committee on Commerce and Economic Development for review and discussion.

The initial copy of ONCA 12-18 contained a sovereign immunity waiver clause, which would be approved upon the final actions of Congress and Principal Chief John Red Eagle. Red Corn said ONCA 12-18 was reviewed and approved by the Gaming Enterprise officials before requesting the bill be fast-tracked.

In objection of ONCA 12-18’s fast-track, Congressman Geoffrey Standing Bear said: “This whole proposal to bypass the committee’s out of order.” He said he was concerned the waiver’s language did not contain language addressing worse-case scenarios, which could place the Nation’s government funds at risk.

Red Corn reiterated his concerns about separation of powers in the three-branch government during an emergency Commerce committee meeting held after the Dec. 12 session. “It is not the responsibility of this Congress to micromanage,” he said of Congressional requests for reviewing documents and proposals to be managed by the Executive Branch, which includes the Gaming Enterprise Board. Red Corn shared similar separation of powers concerns earlier this year when the Congress voted to rescind the gaming board’s power to hire outside legal counsel during the Tzi-Zho Session.

Also in his concerns, Standing Bear cited the Nation’s gaming law (ONCA 07-30) which states the gaming board has the authority to enter into contracts under $500,000, but the board must consult with Congress for contracts, which are over $500,000.

According to ONCA 12-18, the loan must be amortized, or paid back, in five years.

Red Corn later filed an amended version of ONCA 12-18, which was considered for a final vote on Dec. 15. That day, the Congress also considered a competing loan bill (ONCA 12-13 sponsored by Congressman William “Kugee” Supernaw). ONCA 12-13 would have authorized the gaming board to receive the $27.1 million loan from the Nation, which has over $50 million in its reserve fund.

According to ONCA 12-13, the gaming board would be required to pay the loan back to the Nation within five years from the disbursement, with interest. The additional interest rate would have been 4.5 percent, the bill states.

Red Corn’s updated ONCA 12-18 bill allows the Gaming Enterprise to seek the loan from an outside lender, but requires Congressional approval on any sovereign immunity waiver to be considered in the loan agreement.

The interest amount to be charged according to ONCA 12-18 was not included in the bill, but Red Corn said the interest rate quoted to the Nation was 1.1 percent in his Dec. 19 Update e-newsletter.

Congressman Eddy Red Eagle, who is chairman of the Congressional Appropriations Committee, said the Nation’s gaming assets would be used for collateral during the Dec. 15 session. Red Eagle said the Gaming Enterprise would only use the casino cash flow, property, cash on property and Osage-owned slot machines as collateral. The Gaming Enterprise will not use any trust-related property for collateral, which includes the land parcels and the casino buildings, he said.

Supernaw said he opposed ONCA 12-18 and preferred the Nation loan the casino the money as proposed in his bill. “There’s just no logical reason to go borrow the money when you have the money,” he said.

ONCA 12-13 failed with two “yes” votes from Supernaw and Standing Bear. The remaining eight voted “no” while Red Corn and Congresswoman Shannon Edwards were absent.

Chief Red Eagle signed ONCA 12-18 into law the next day.