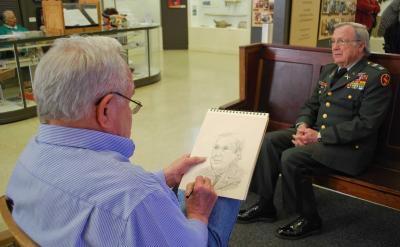 With 15 minutes, a carbon pencil and the perfect lighting C.R. Redcorn can turn a longtime military veteran into the young warrior he or she once was.

With the stroke of his pencil and a little bit of conversation Redcorn, Osage, spends one day a week at a local veterans hospital in Louisville, Ky., drawing portraits of veterans for free.

The 77-year-old retired business owner has spent every Tuesday afternoon since October 2011 drawing portraits of veterans for free, and on Feb. 11, he brought his talent to the Osage Tribal Museum to draw some of Osage County’s finest.

Redcorn said every time he sits down to draw his portraits he enjoys the stories, conversations and being able to put a smile on a veterans face.

“It’s just very gratifying to experience that eight times a day, and I do most of the time look forward to it,” he said. “The best part is when I take a veteran of War World II and…when they get that picture, they look at it, they haven’t smiled the whole time they’ve been sitting there, and they get a great big smile on their face and they say ‘this is me when I was younger’ and they want to show it to everybody…that’s my pay off.”

About eight local Osage veterans showed up Saturday afternoon to the first-come first-serve event and patiently waited their turn.

Redcorn was in Pawhuska for the weekend to visit his siblings, Charles H. Red Corn and Kathryn Red Corn, director for the Osage Tribal Museum.

He decided to open up an afternoon to draw some portraits of local veterans and at the end of the day he thought it was a good idea.

“It was really good, I got to see people I haven’t seen,” Redcorn said.

He saw old classmates, old friends and made some new ones.

J.T. Moncravie, a genealogist working at the University of Arkansas and an Air Force veteran, said he heard about the event the day of and thought it was a nice gesture.

“It takes great contribution to people who served in the service, especially the Osage,” he said. “We don’t get much recognition and so forth, so I think it’s fantastic.”

Other Osages from the area and surrounding states including Clifford Mosier who traveled from Fayetteville, Ark., Romain Shackelford, Gene A. Milleson and brothers Harry and James Elsberry also had their portraits drawn.

While veterans shared their service stories Redcorn shared his love for drawing.

Redcorn started drawing when he was about seven years old. He said drawing was something that came naturally to him.

“When I was in the first grade I went to the same Indian Camp School and then years afterward I had to come back and sand all those desks I went through, I drew on them so hard they got dents in them,” he said. “I had to go back and sand them all, I was drawing on everything.”

And he never stopped.

In high school he created illustrations for the annual yearbook and continued to draw. He drew his first portrait as a freshman when a friend of his asked Redcorn to draw a picture of him.

After high school he studied fine arts at Northeastern State University then studied at a local art institute, but things didn’t work out.

He married his first wife Iris McFadden, who died of cancer in 1991, and they had three children together. He later remarried Anna Marie Redcorn.

After working his way up he eventually moved his family to Denver, Colo., and got a job with a national supply company. After 10 years as a salesman for the company he was relocated to Kentucky where he worked for another three years.

He eventually left the company and started his own in 1975 and managed it for 33 years.

Between his family and running a company he made sure he always found the time to draw.

Redcorn has three children one of which, Rox Anna Mudge, is also a renowned artist, who drew a portrait of former Osage Nation Principal Chief Jim Gray that now hangs in the Tribal Museum.

So far Redcorn said he’s drawn about 2,500 pieces and about 2,000 of them are portraits. He sold just about every piece of art he’s put up for sale.

After Redcorn sold his business he dove head first into his artwork. He got his first big gig illustrating a book and has since lined up four more illustration jobs.

He decided to branch out and draw portraits for children at a local Children’s Hospital in Kentucky, but after careful consideration he thought it might be a little difficult.

But Redcorn decided he’d give the veteran’s hospital a try. He said when he first presented the idea to administrators of the hospital they didn’t like the idea being that they are protective of veterans.

After learning that Redcorn, a Nation Guard veteran, wanted to draw the portraits for free and wanted nothing in return the hospital decided to give it a try.

He started in October and has shown up every Tuesday at 1:30 p.m. to draw eight portraits; so far he’s drawn about 130.

“They were surprised I wanted to do this and not be paid for it,” he said. “I had a really successful business, I’ve operated, and when I sold it was eight states we operated in and I had 53 employees, it was done well.”

He said the veterans and the hospital employees liked what he was doing so much that they’ve offered to buy supplies for Redcorn to use when drawing his portraits of the veterans.

Redcorn said he enjoys many things about drawing portraits of veterans but nothing more than the conversations.

“I look forward to that too, especially from veterans, I took one, it was a guy who been wounded in Fallujah, he liked me right away and we talked, so now we’re hunting and fishing buddies, he’s a really good guy,” he said. “I’ve learned that doing something for somebody is the best elixir for good health and enjoyable…if you do something for somebody for nothing and they get a lot of pleasure out of it, I see it from them, I hear from them.”