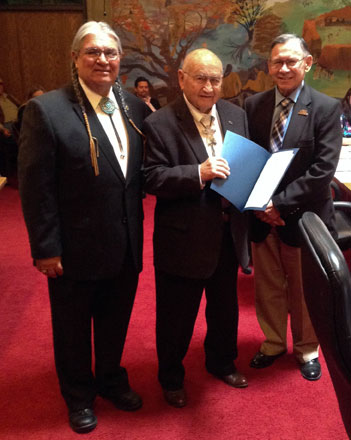 The Fourth Osage Nation Congress honored former Tax Commission board member Milton Labadie with a citation for his years of service during the final day of the 2015 Hun-Kah Session.

On April 27, the Congress voted unanimously on a resolution to issue the citation to Labadie who was present in the chambers that day.

Congressmen Archie Mason, who sponsored the resolution ONCR 15-16, and James Norris (co-sponsor) presented the citation to Labadie following the vote. The citation said Labadie was instrumental in creating the Tax Commission “for the benefit for all Osage people and whereas Milton Labadie has served on the Osage Tax Commission and contributed his banking knowledge and success to the Nation’s Tax Commission.”

Congresssman RJ Walker praised Labadie and said “he’s a good man and he stands true to his convictions, it’s been a pleasure.”

“It was very enjoyable because I was surrounded by very good people,” Labadie said of serving on the Tax Commission. A former chief executive officer of Osage Federal Bank, Labadie credited late Osage attorney Browning Pipestem for his work in writing the rules and regulations before serving on the board for 20-plus years. Labadie also praised the Tax Commission staff present for their work.