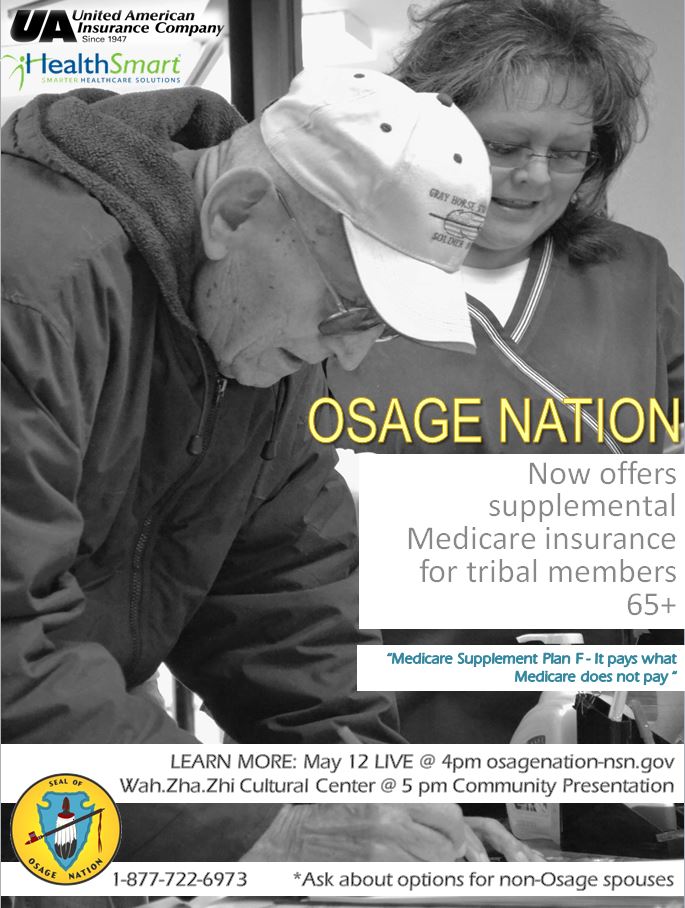 Osage Congress passed legislation in 2014 to provide supplemental Medicare benefits for qualifying Osages 65 years and older, the benefits will be available beginning July 1.

In an executive memorandum to Osage elders on April 27 the Chief stated, “It is my pleasure to introduce the Osage Nation’s latest tribal elder health benefit-optional Medigap coverage … our elders are our greatest asset and as such we are proud to support you.”

“There is no greater honor or service than providing for your elders and the Osage Nation has proven time and again to be a generous tribe to their people,” said Bartlett who has been working with the Nation to facilitate health benefits for the Osage people for more than six years.

“This service is really an evolution of the health benefit card,” he said and added, “… the supplemental coverage will eliminate the deductible for physicians and hospitalizations.”

Congresswoman Shannon Edwards sponsored the bill to provide the supplemental coverage. She said the additional coverage fulfills the Nation’s constitutional mandate to provide for Osage elders. “The supplement is another step forward to putting our revenues to use for the greater good.”

She said Osage elders need to be informed about receiving the benefit because it is not the same as the health benefit card.

All Osage tribal members regardless of age and health are eligible to receive a $500 health benefit to assist with coverage for various allowable medical costs like prescription glasses, prescription drugs, and medical co-pays. With the new supplemental health coverage for elders there is the option to either receive the health benefit card with a guaranteed amount of $500 and up to $1000 if the funds are available or select the Medicare Plan F coverage with a monetary value of $193 per month or $2,316 annually.

“The law says $500 for each tribal member and $1000 for over sixty five, but that’s only if the there is enough available funding, so it’s not guaranteed,” Edwards said about the Nation’s annual budget for the health benefit card. She added, “The treasurer must confirm there is enough available funding to offer elders the $1000 benefit and that decision is made in late September.”