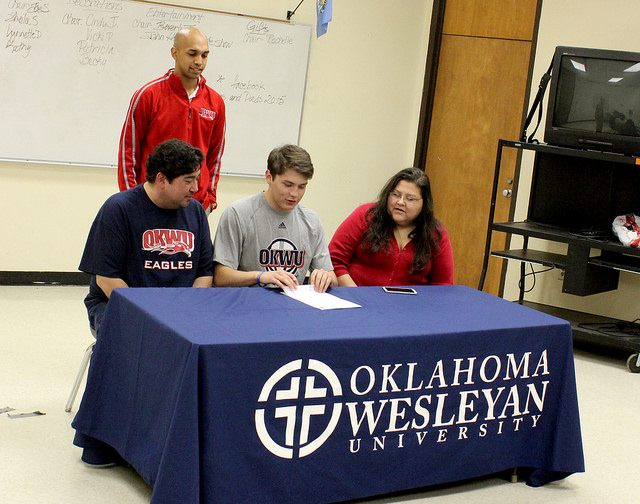 Pawhuska High School senior Treyton Redeagle signed a letter of intent with Oklahoma Wesleyan University on April 23.  He received a full basketball scholarship with the Eagles.

“This season Trey was not only the leading scorer on the team, he was the vocal leader and a leader by example. He had a never-give-up attitude and competed at all times he was on the floor,” said Monty Unruh, head basketball coach for PHS. “His love and passion for the game is why he will succeed at the next level.”

“I’m very excited about this opportunity. This has been a lifelong dream of mine,” he said. “Wesleyan is a great school. I will be able to further my education and grow my relationship with Christ. I will work hard to make my family and the tribe proud.”

“We’re so proud of him. He’s always been a ‘make it happen’ kid since he was a toddler,” said his mother, Karen Redeagle. “He knew what he wanted and always went for it. We are so happy that he gets to continue his education and do something he loves.”

Redeagle plays guard and forward and led the Huskies in scoring and rebounds this year. He said he wants to excel on the court and help the Eagles however he can.  He helped lead the Huskies to win the 2015 district championship.

Redeagle also plays football, baseball, soccer and lacrosse, however, basketball is where his heart is. He said that walking on a court or field is exciting because he knows he is going to compete and he likes being able to lead his team.

“We are delighted to have him in the program and get things rolling next year,” said Joshua Young, Assistant Basketball Coach at OWU. “We love to have the local guys and get the support from the community, we are really looking forward to it.”

Redeagle is the son of Creighton and Karen Redeagle and the grandson of the late Charles and Georgia Rector and great-grandson of Minnie Harvey James and Robert and Beverly Rector.

He is Eagle Clan and belongs to the Pawhuska District and has participated in the In-Lon-Schka since he was three years old. He is a member of the Osage Nation and is also Cherokee, Creek, Quapaw, and Seneca Cayuga.