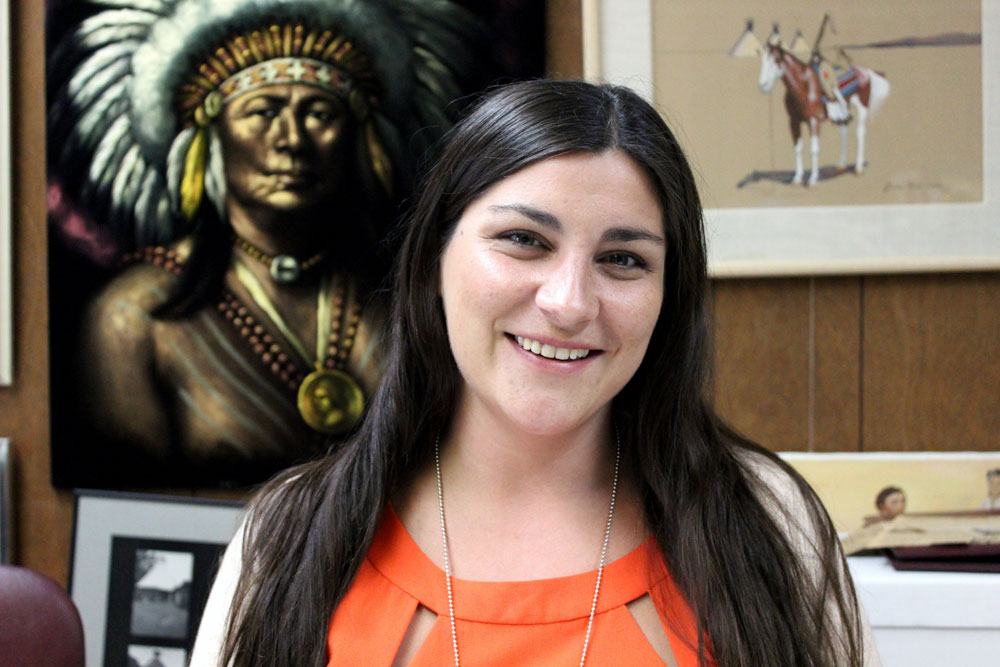 Childhood memories of trips to Oklahoma led Hallie Winter to search for jobs within the Osage Nation in hopes of immersing herself in the culture.

She was born in Tulsa, Okla., but her family relocated to western New York in the Buffalo area where she has lived for the past 27 years.

She felt disconnected from her heritage being so far away, which led her to apply with the Osage Nation. Her work experiences led to her position as the Director of the Osage Tribal Museum. She replaces Kathryn Red Corn who retired in March after 16 years as the museum’s director.

“I like to preserve culture and history and teach people about things they don’t see in everyday life,” Winter said.

She attended college in Buffalo, N.Y., at SUNY Buffalo State College where she attained her Bachelor of Art History with a minor in Museum Studies. She plans to complete her online master’s degree in Museum Studies with the University of Oklahoma.

She has worked as a program coordinator for the past eight years at the Center for Exploratory and Perceptual Art, a three-gallery collaboration of three non-profit organizations, CEPA, Big Orbit Gallery and Just Buffalo Literary Center, according to its website.

Winter has worked at several art galleries in her career and volunteered on exhibit teams at the Buffalo Museum of Science and Lackawanna Steel Plant Museum. She said she has knowledge of all aspects of galleries and museums and hopes to bring that expertise to better the Osage Tribal Museum.

“Art and museums are able to show you a piece of the past in different ways,” she said. “You can read about it, but when you can see it, then it is up to you for interpretation. I love learning and I think everyone should learn. It is interesting to see different cultures and different artists interpretations of history.”

Winter has big plans to upgrade the Osage Tribal Museum to museum standards. She hopes to have it remodeled, which would include up–to-date storage for more accurate cataloguing and labeling of each piece of art in the collections.

Once the inventory has been updated, she will then reach out to artists and purchase new art for the museum or take donations for new exhibits.

She said she would like to showcase the work of contemporary Osage artist in multiple mediums, such as pencil, pen, paint, film or video.

The museum will be dissolving the gift shop in coming months, as a new Osage Nation Tourism Department will open a gift shop. However, in the future the gift shop may reopen in the museum after changes and updates have been made.

She said that they will be archiving digitally and will have a touch screen so people can come in and look up different photos and art pieces. Going digital will be more cost effective and provide more space for exhibits, which will make it easier to provide online exhibits, Winter said.

“So far I love it; I am really happy to be here,” Winter said. “ I am excited for the changes, and they will be for the good of the museum and the tribe.”

In other plans, the museum will improve its online presence by:

The museum will be holding fundraisers and providing educational opportunities, such as a docent program, as well as catering to youth with school field trips and summer programs. She said she hopes to collaborate with the Osage Language Department and the Wah-Zha-Zhi Cultural Center for ideas to draw in the youth and to help with youth programs.

The Friends of Libraries in Oklahoma honored the Osage Tribal Museum as an Oklahoma Literary Landmark in 2009. It is the oldest tribal museum in the United States and was established in 1938.