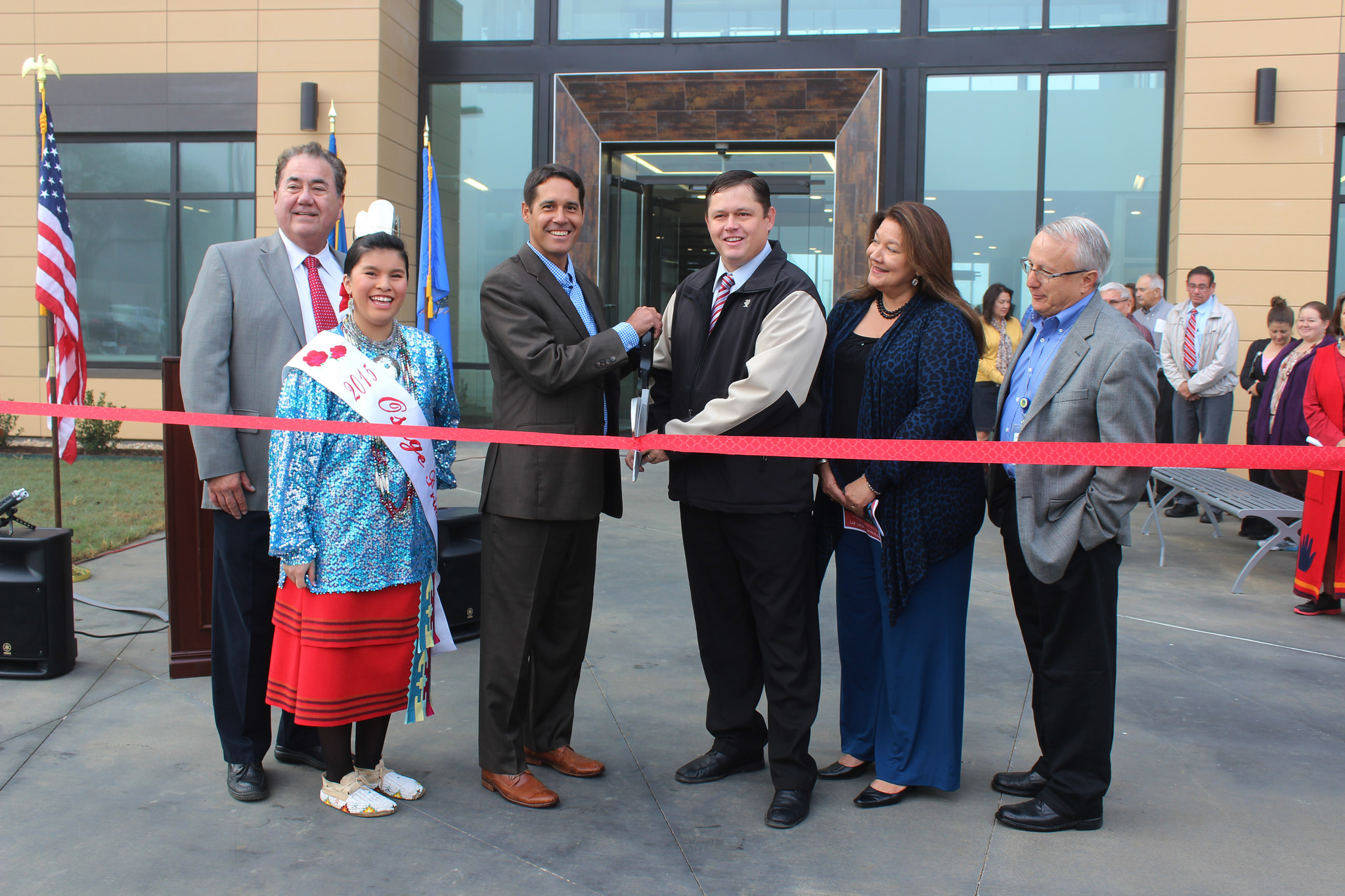 Six years after community planning meetings were held to design a new Osage Nation Campus two of the buildings were officially opened to the public.

Osage Nation officials and community members attended a ribbon cutting and sunrise ceremony for the new Law Building and Welcome Center on the morning of Nov. 2.

The two new buildings, located at 239 West 12th Street in Pawhuska, feature state-of-the-art features and an environmental-friendly design by the Seattle-based architecture firm CollinsWoerman – which was selected by a planning committee in 2009.

Service-oriented departments were once scattered different buildings in Pawhuska and Hominy, are now all centrally located in the Welcome Center.

The 18,000-square-foot, two-story Law Building houses the ON Police Department, the ON Attorney General’s Office, and the Office of the Treasury, accounting department and Emergency Management.

According to a news release, the buildings feature sustainable energy features such as a temperature control system that uses natural light, water, fans and pumps to cool and heat the buildings. A rainwater collection system on the roof allows for recycled water to be used. The Welcome Center contains a basement, which can be used as a storm shelter for employees. The buildings feature Wi-Fi access, larger work spaces to accommodate growth, and added conference space for the Nation’s employees.

Tribal Development and Land Acquisition Director, Bruce Cass, has overseen the project since its inception and says the environmental-friendly design of the buildings will save the Nation money over time.

“This is a state-of-the art facility, it’s not every day a building like this is built in this area,” Cass said in the news release. “These two buildings, combined, use less energy than some of our older buildings alone.”

The buildings, which were constructed by the Penta Building Group, were originally planned to open in May but were delayed due to weather and construction delays. The cost of the buildings was approximately $24.6 million for construction.

A nine-foot statue of Chief James Bigheart was commissioned in March to be placed in front of the Welcome Center, to be done by Osage sculptor and former Congressman John Free. The statue is estimated to cost $90,000 and will come out of contingency money left over from the project.

The original 91-acre campus master plan by CollinsWoerman included 15 new buildings but the plan will evolve over time, Cass said.

“The Master Plan lends itself to the changes around us. As the plan evolves with us, the ability to reprioritize phases of the plan given various circumstances, we have created or saved space on the campus for development for the Osage people. Some of the circumstances could include the economy, a grant opportunity or the need to address immediate infrastructure concerns, and new initiatives,” Cass said. “As Chief Standing Bear has identified as one of his goals to provide a service to our Osage children the Campus Master Plan has reserved space for future development to enhance the quality of life for our Osage youth. So whether it is phase two or phase three or phase four, there is a place for the initiative on our campus.”

Historical buildings such as the Chief’s Office, the Superintendent’s House and the Osage Tribal Museum will remain intact.

“It’s important to thank the Osage people and people of our community who actually performed construction and contributed to these facilities. Shelby Woodward, who worked for Penta in their accounting department, Raymelle Wilson who was a construction engineer, Jason Duty and James Cosby, that’s just to name a few and there were approximately 20 others who worked on these projects that deserve recognition,” Cass said. “It wasn’t just all outside people working on these projects. We made an effort to employ Osage people and surrounding community folks on our project.”

For more information on the new buildings, call the ON Constituent Services at (918) 287-5662 or visit the Nation’s website at www.osagenation-nsn.gov.