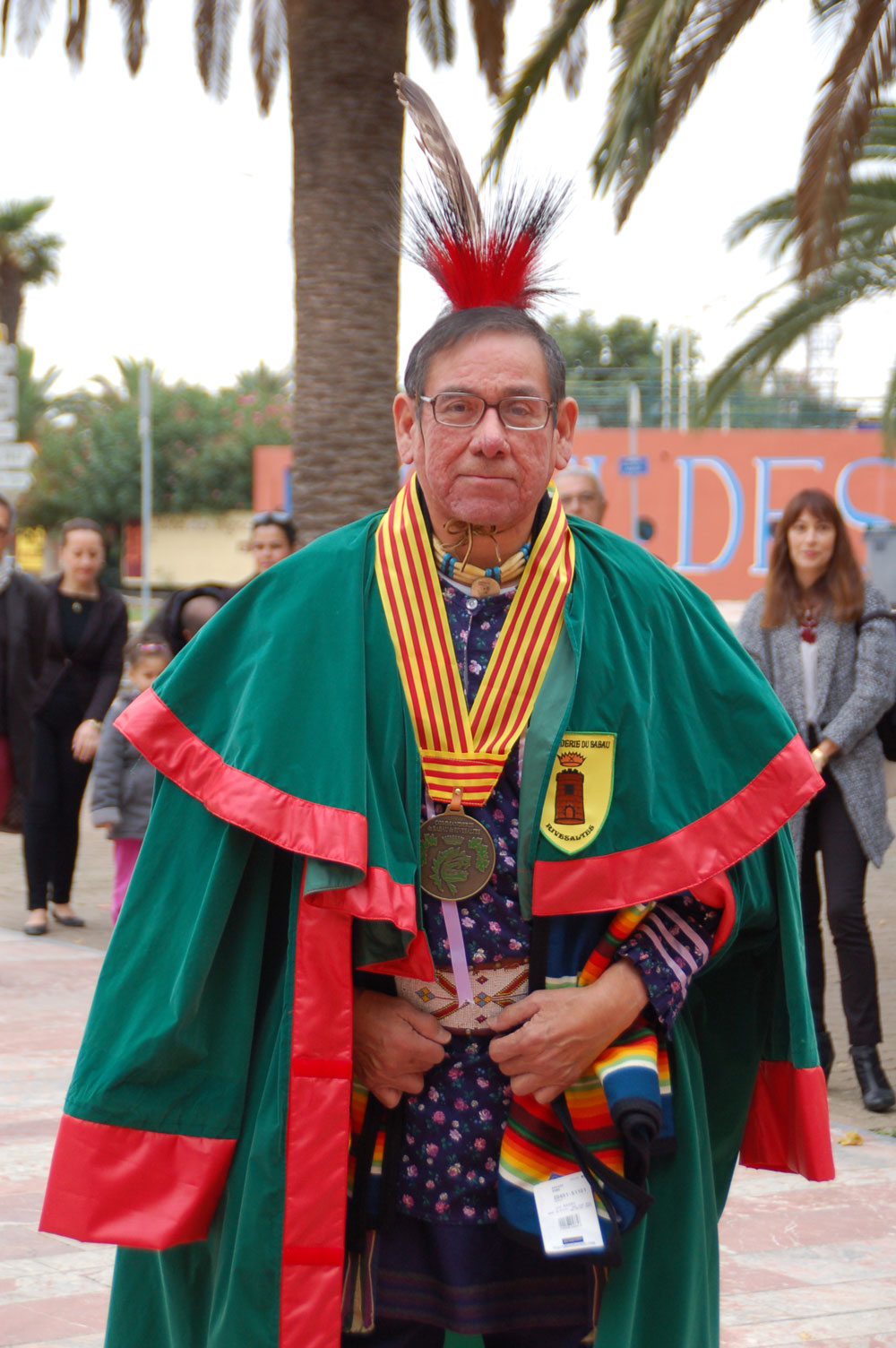 Osage Nation Congressman John Maker was inducted into the French Brotherhood of Muscat de Rivesaltes on Oct. 17 in Riversaltes, France.

Muscat de Rivesaltes is a sweet white wine made from the region around the town Rivesaltes that sits on the bank of the Mediterranean Sea. In 1827, when six Osages traveled to France and were left stranded for more than two years and left to beg and starve in the streets of Paris, they made it to Montauban, France where a Bishop took them in and nursed them back to health. One of those Osages was Big Soldier, and the story goes that Big Soldier loved the Muscat de Rivesaltes.

Maker, who is a descendant of Big Soldier, said he was contacted in May about being inducted into the Brotherhood in honor of Big Soldier.

“The induction ceremony was wonderful. It’s like a dream that it all happened. It was completely fantastic. They knighted me into the Brotherhood, said such nice things about the tribe and Big Soldier. They had never seen Osage clothes before and they were very impressed by my regalia,” Maker said. “It was such a celebration and an honor. I’ll always remember it.”

The induction ceremony took place in the town of Rivesaltes during a two-day celebration. The event was broadcast on French television and there were numerous news outlets there to capture the moment, Maker said. He wore his Osage clothes for the ceremony. There was a procession, a traditional French dance was performed, speeches of what was to take place and then the Grand Master asked Maker to kneel down. They put a green cloak on Maker, bestowed a medal on him and knighted him with a sword into the Brotherhood.

After Maker was inducted he read a letter from Principal Chief Geoffrey Standing Bear to the attendees and presented a purple Pendleton blanket to the Grand Master of the Brotherhood.

Maker spent 17 days in France, traveling the countryside and speaking about the Osage Nation, its culture and its people. While he was in Montauban at the beginning of his trip he stayed with Jean-Claude and Monique Drouilhet, organizers for the Oklahoma Occitania II (OK-OC), the Osage Nation’s sister city.

The OK-OC is a partnership between the Osage Nation and Montauban, to always keep a friendship between the two cities in honor of the six Osages who were rescued there in 1829.

Maker said when he was a child his grandmother would talk about how her great-uncle Big Soldier went to France. He said when he went to France in 2007 with Wah-Zha-Zhi Cultural Center Director Vann Bighorse, a reception was held behind a cathedral in their honor. At the reception was a Bishop who walked over to Maker, poured him a glass of wine and handed it to him saying, “the drink of Big Soldier.” It was the Muscat de Rivesaltes.

In a May 22 email from Jean-Claude to Maker, he said the OK-OC was very impressed with Maker’s knowledge of the Osage culture and that they remembered Maker expressing his grandmother’s stories of his ties to Big Soldier.

“This story of your ancestor Big Soldier who had loved the good wine of Rivesaltes came to the knowledge of a brotherhood of the city of Rivesaltes in the Eastern Pyrenees, the banks of the Mediterranean sea,” Jean-Claude wrote. “This brotherhood has the mission of celebrating the Muscat de Rivesaltes and publicize it in the world. The Grand Master of the brotherhood would meet you and, on this occasion, induct you into the Brotherhood during a ceremony that he would organize in Rivesaltes.”

The Fourth Osage Nation Congress commended Maker on Oct. 2 during its Tzi-Zho Session. Sponsored by Congressman Archie Mason, who has traveled to France many times and is good friends with Jean-Claude and Monique Drouilhet, commended Maker for his induction, for accepting the honor as a direct descendant of Big Soldier in “his very humble way.”

“That your colleagues in this body of Congress honor you and wish you bon voyage.”

Maker, who has never been to the Mediterranean finally got to see it and said it was beautiful. He’s wanted to go ever since he was stationed in Germany for two years in the early 1980s when he was in the U.S. Army, he said.

He said the trip wasn’t all vacation and he was kept busy giving talks in Montauban, Riversaltes and Paris. Everywhere he went he read the letter from Chief Standing Bear. His most memorable moment, besides being inducted into the Brotherhood, was getting the chance to visit Lourdes. Lourdes is the site of a miracle, where a Catholic Saint saw the Virgin Mary. He prayed at the Cathedral there, he prayed for the tribe, for its leaders, for those that were sick and grieving. He brought back holy water and rosaries from Lourdes for all his nieces and nephews.

His last four days in France were spent in Paris. He stayed with two professors from the University of Paris who taught Native American studies. They took him to Notre Dame, the Eifel Tower and the Louvre.

“I give all praise to the Osage people, those old ones from long ago,” Maker said. “I gave thanks to God and prayed for the tribe in that holy place in Lourdes.”