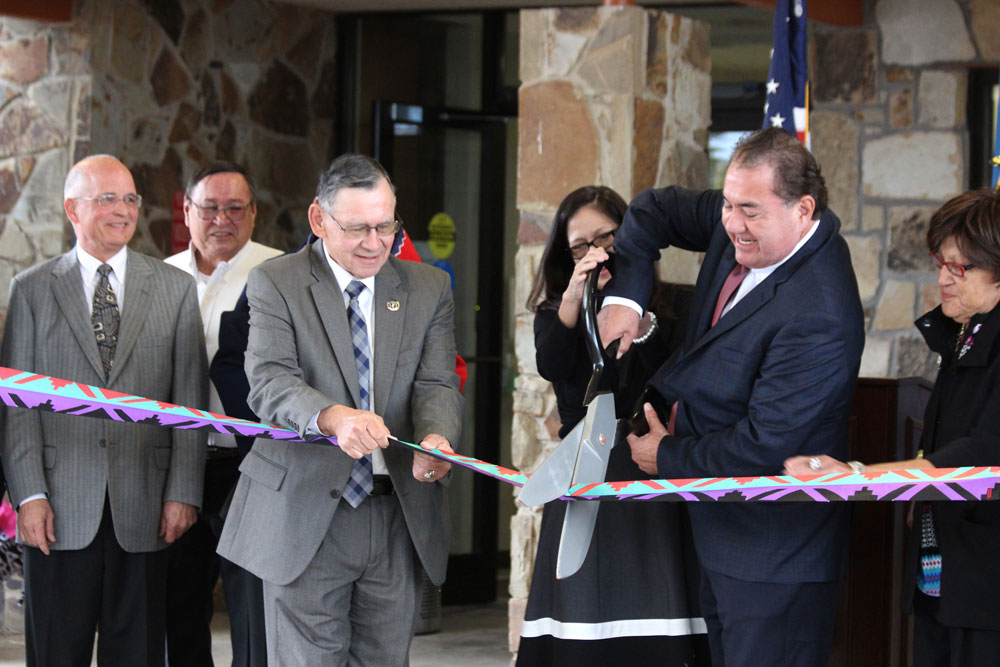 The Wah-Zha-Zhi Health Center, formerly the Pawhuska IHS Clinic, has been open for nearly a month and on Oct. 27 it was business as usual.

Patients wait in the waiting area, nurses come and go, staff walk the halls. Everything seems the same except for two new full-time physicians have joined the Health Center, and business office personnel has increased and they are still hiring.

Acting facility director and Chief Pharmacist Carl Murray said the Health Center now has three full-time physicians. Before the Osage Nation took over the Pawhuska IHS Clinic Oct. 1, there were two full-time physicians and a nurse practitioner who came once a month for women’s health. He said having three physicians greatly improves services offered.

“There should be more appointments, more available time slots throughout the day. It should mean you can get in quicker, meaning your appointment will be sooner and the clinic should run at a faster pace,” Murray said. “Structurally everything is still the same, nothing’s changed. We are currently hiring, we’re interviewing for a Business Office manager. Jobs are advertised through the tribe.”

Fully staffed the clinic employs approximately 40 people, he said, but the staff will more than likely increase in coming years. Also on the horizon is a new clinic, but the strategic plan and design details are still being worked out by the ON Health Authority Board and their consultant, Lesa Shaw, said Manon Tillman, Health and Wellness division leader.

“We hired a new medical licensed social worker who will be starting soon. We have a new radiology technician. Recently hired two billing technicians and a voucher examiner in the business office and a compliance officer,” Tillman said. “In our negotiations with Indian Health Service, there are few positions that we are buying back, we’re having the pediatrician still come once a week, the nurse practitioner comes once or twice a month for women’s health, Pawnee is still doing our billing for us, and a psychiatrist twice a week.”

The two new physicians joining the Health Center are Dr. Tom Foreman (Cherokee) and Dr. Cameron Rumsey. Rumsey, Osage and whose first day was on Oct. 15, is from Pawhuska. He was working with the Cherokee Nation at their clinic in Vinita when he decided to come home. He and his family currently live in Claremore.

“I’m excited, it’s a new clinic, have a chance to change things at the clinic for the Osages,” Rumsey said. “It’s nice because I know everyone … you create relationships, good rapport with patients, that allows to provide better healthcare.”

He said at the Cherokee Nation clinic the turn around time for patient visits was 40 minutes, including pharmacy time. He said that’s pretty much unheard of in the medical field and that’s what he wants for the Osages.

Tillman said there is a temporary optometrist and dentist on contract and the dentist is interested in working full time. The Health Center has left the Purchase Referred Care (contract health) and Information Technology support with IHS until the tribe can run those programs, hopefully.

“No services have really gone away,” she said. “Our goal is to add services in the future and we are taking feedback from the community.”

The Health Center has 10 examination rooms. They recently bought a new analyzer for the lab and purchased a new X-ray machine, Tillman said.

She said they are currently working on a website for the Health Center, to aid patients in information about the clinic, its staff, services and important information for patients. They hope to have that up and running soon.

The IHS compact, which was signed on July 16 by Principal Chief Geoffrey Standing Bear, allowed the Nation to take control of the clinic.

In 2014, outpatient visits for Pawhuska Clinic numbered 28,814 and Primary Care visits were 9,750. The Pawnee Service Unit, including Pawhuska and all other facilities, had a total active user/patient population of 16,656 in 2013. Osage active patients numbered 2,450 in the 2013 IHS User Population Report, and comprise the largest resident Tribe within the IHS Pawnee Service Unit.

The current ON Health Authority Board consists of Margie Burkhart (chair), Nancy Keil, Dr. Patrick Tinker, Cecelia Tallchief and Mike Moore. The board next meets on Nov. 5 at 5:30 p.m. at the Pawhuska Development Center.