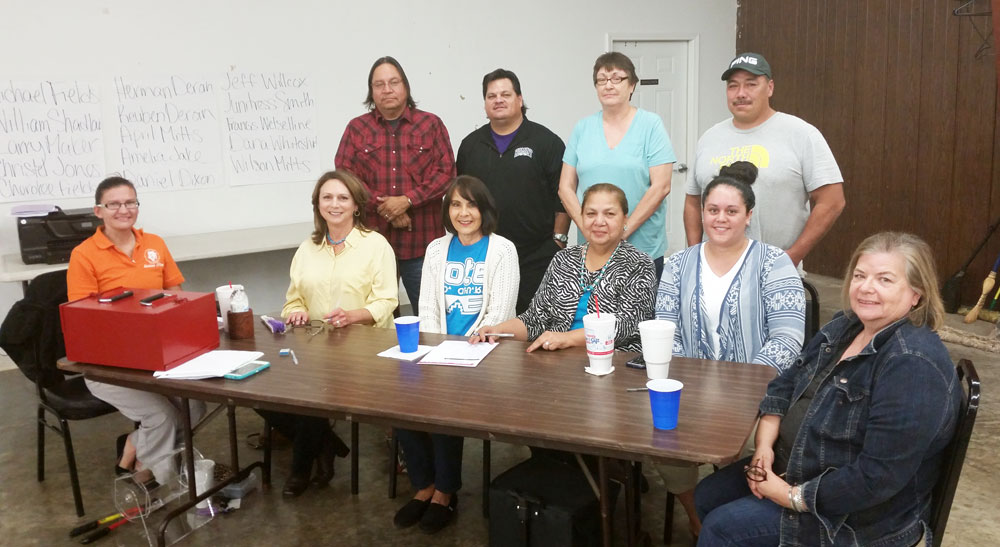 HOMINY, Okla. – Following a two-night election, the Hominy Indian Village has a new Five-Man Board to oversee the maintenance and upkeep of the village lands.

On Nov. 3, the Osage Nation Election Board announced the voting results after conducting the election in the Community Building where they counted the votes at the end of the second night. Now serving on the Five-Man Board are: April Mitts, Reuben Deroin, William Shadlow, Jeff Willcox and Laurence “Larry” Maker.

The 2015 election comes following an executive order issued by Principal Chief Geoffrey Standing Bear calling for the village election, which had not been held since 2009. The Election Board opened a polling place at the village Community Building for two nights so village residents could cast votes once board nominees were made. The process is similar to the Pawhuska Indian Village’s Five-Man Board election, which was held one week prior to Hominy’s.

On the first night of elections, approximately 40 residents and family members arrived at the building where the Election Board took nominees from the public, which added up to 15 individuals for voters to choose from. The nominees were: Michael Fields, Shadlow, Maker, Christel Jones, Cherokee Fields, Herman Deroin, Reuben Deroin, Mitts, Amelia Jake, Daniel Dixon, Willcox, Juintress Smith, Francis Wetselline, Dana Whiteshirt and incumbent Wilson Mitts.

Residents and candidates clapped after the results were announced and congratulatory handshakes and hugs were extended to the new board members afterward.

Shadlow, whose late father Amos Shadlow previously served on the board, said he is excited to serve on the new board and said one priority he’d like to see is more clean-up efforts in the village to remove litter and dump sites. To address the issue, he said he’d like to see weekends where a large dumpster is brought into the village so residents can dispose of trash and rubbish for cleaning efforts.

Mitts also expressed thanks for winning the election and said she and some of the other board members would consider visiting one of the upcoming Pawhuska village Five-Man Board meetings to get acquainted with how that board runs its business and to get ideas on what the Hominy board will do moving forward.

The Hominy community also reacted with “congratulations” regards for the new board on Facebook from people, including fellow candidates and Congress members John Maker and Alice Buffalohead, who are both from the Hominy District as well.

The new board replaces the previous board, which included Everett Waller (chair), Wilson Mitts, Jessie Mickles, Jake Waller and one vacancy.

The current Hominy Indian Village constitution was developed and approved in March 1964 by the Osage Tribal Council at the time and is signed by Principal Chief Paul Pitts. According to the village constitution, the village committee is organized “to provide for the health, safety and welfare of its inhabitants; to provide for the maintenance of tribal property; and to serve as custodian and manager of tribal property and improvements located within said village.”