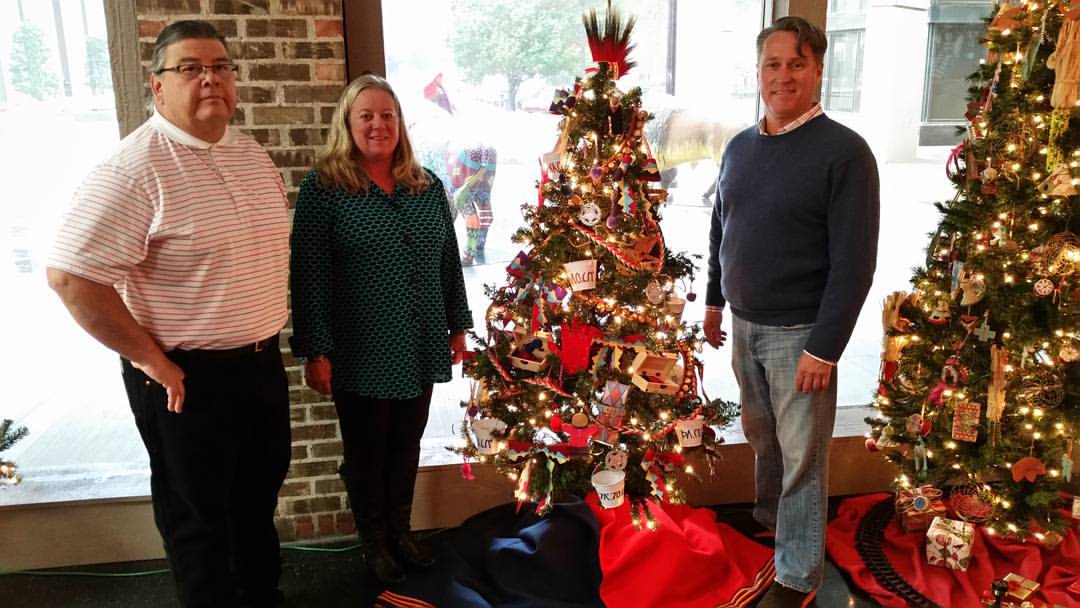 Starting Dec. 1, the Red Earth Art Center will celebrate the Christmas season with its month-long Treefest exhibit featuring the five trees decorated with handmade Christmas ornaments “created to highlight the diverse Native cultures that make Oklahoma unique,” according to the center.

This year, the Osage Nation will be featured in the exhibit along with the Citizen Band Potawatomi, Chickasaw Nation, Cheyenne & Arapaho Tribes and the Comanche Nation.

On Nov. 16, Wah-Zha-Zhi Cultural Center Director Vann Bighorse and Osage designer Chad Renfro decorated the Osage tree at the art center using scores of handmade ornaments that showcase the various elements of Osage culture including many items used during the ceremonial In-Lon-Schka dances held each June. Bighorse said several Osages used their sewing and artistic skills to create the ornaments which include bows made from ribbonwork, finger weaving work used for garland, miniature cedar chests, baby cradleboards, miniature buckets mimicking those carried by waterboys during the dances, and cut-out handprints in red and blue colors.

“We’re showcasing our rich culture,” Bighorse said of the ornaments made with designs that date back to Osage ancestors. “The waterbuckets are significant for water… we use water in a lot of our traditions, we have a cedar chest that we put our clothes in and heirlooms… We have bells up here that our men wear… As we know, it takes rain to make things grow, make our crops grow and it sustains life. So that’s what our tree represents – all of our Osage culture.”

Bighorse said assistance was sought from various Osages who have arts and craft experience, as well as those who make Osage dance clothing including Debbie Cheshewalla, Kilan Jacobs, Janet Emde, Herman Sleeper, Bighorse and Renfro.

Renfro tied a man’s roach and feather to the tree top and said fresh cut cedar from Debbie Cheshewalla’s residence was used as filler around the faux pre-lit tree to cover gaps. Renfro told museum staff several of the ornaments are miniature versions of items used on Osage dance clothes including the finger weaving and yarn balls used.  Renfro, who has a Pawhuska design business office, donated a red and blue Pendleton used in his office décor to serve as the tree skirt.

ON Congresswoman Shannon Edwards, who is a board member for the Red Earth art organization, also helped decorate and applauded the exhibit noting the exhibit and Oklahoma City center “is something near and dear to my heart.”

Eric Oesch, communications director for Red Earth, said the exhibit will be larger next year and other tribes will be invited to participate and decorate a tree. He added the exhibit is inspired by Red Earth’s participation in a similar Christmas tree exhibit when Red Earth was at a prior location.

“Before we relocated to downtown Oklahoma City in 2010, Red Earth was located for over 30 years at the Kirkpatrick Center Museum Complex (now known as Science Museum Oklahoma),” Leslie Blair, president of the Red Earth Board of Directors said in a news release. “One of the most popular annual events we participated in while at the Kirkpatrick Center was their Holiday Treefest. By presenting our new version of Treefest, we hope to carry on the tradition of featuring Christmas Trees adorned with beautiful ornaments representing different cultures.”

The Red Earth Art Center is open free to the public Monday through Friday at 6 Santa Fe Plaza next to the historic Skirvin Hilton Hotel in downtown Oklahoma City. Red Earth is online at www.RedEarth.org or can be reached at (405) 427-5228 for additional information.  Red Earth, Inc. is a nonprofit organization with a mission to promote the rich traditions of American Indian arts and cultures through education, a premier festival, a museum and fine art markets, according to its website.