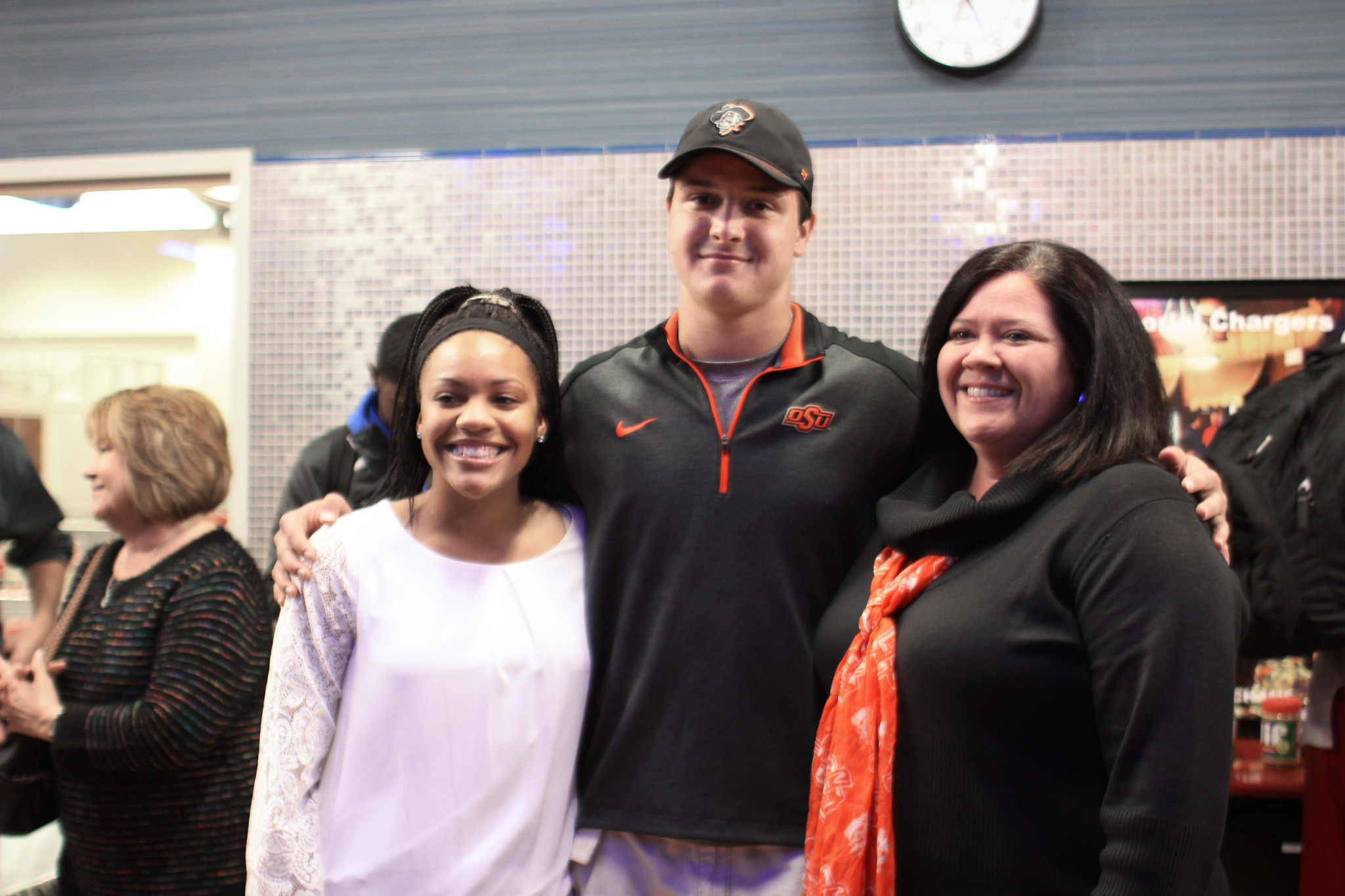 Tulsa Memorial High School senior Trevor Boone signed a Letter of Intent to play baseball for the Oklahoma State Cowboys in the fall.

Boone, Osage, plays catcher for the Memorial Charger’s and also played quarterback for the football team. His talents have caught the eye of not only college recruits but Major League baseball teams as well.

“Trevor had offers from the University of Oklahoma and Wichita State, he chose OSU after going on an unofficial campus visit and meeting with the head coach Josh Holliday,” said his mother Gayla Boone. “After the visit he knew he wanted to play baseball for [OSU].”

The Robert Sprague Hospitality Suite in the Tulsa Memorial Veteran’s Arena was packed full of teammates, family and friends on his signing day, Nov. 12. He sat next to his mother and his father Fred Feith as he signed a National letter of Intent with Oklahoma State. Attendees clapped and cheered as he signed to play Division I collegiate baseball.

Boone has played baseball since little league and has played in many showcase tournaments where college and major league scouts attend. He was invited to the Area Code Underclassman-White Sox Team in 2014 in Long Beach, Calif.

Area Code baseball offers players the opportunity to train like major league athletics and play in a competitive atmosphere; it also gives some participants a precursor to careers as professional baseball players, according to studentsports.com. The games have produced more than 500 Major Leaguers.

“Trevor is a true 5-tool player in every sense, there is nothing he can’t do on a baseball field and we are blessed to have him represent our program,” said Tulsa Memorial Head Coach Steve Irvine.

Boone has also participated in the 2015 Midwest Scout Workout in Kansas City and in the 2013- 2014 Battle of the Borders in Texas. The result of playing in tournaments such as these has drawn the eyes of Major League teams such as the New York Yankees, Minnesota Twins, and the Miami Marlins.

“We look forward to a great 2016 season and seeing Trevor continue his success at the next level, whether that being college or Minor League Baseball,” Irvine said.

Boone carries a 3.2 grade point average and is the student athlete representative in district wide meetings for Tulsa Memorial.

Boone is the son of Fred Feith from Edmond and Gayla Boone. He is the grandson of John Boone and the grandson of Gloria and Bill Mitchell and Sally and Fred Feith. He belongs to the Grayhorse District and his Osage name is Xhu-Tha Zhu-Tse, meaning Red Eagle.