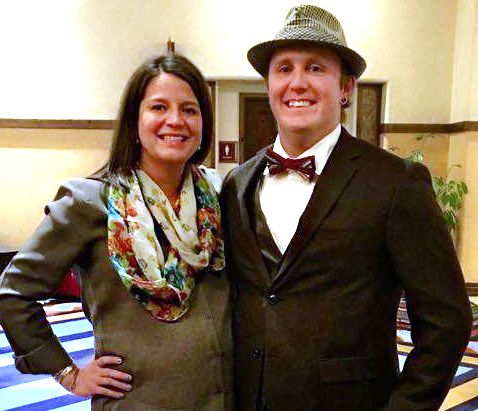 The NCAIED honors 40 up and coming Native American leaders in Indian Country who demonstrate leadership, initiative, dedication and have made significant contributions in business or their community.

“The 40 Under 40 award recipients are a diverse group of young men and women from across Indian Country who have all made invaluable contributions to their communities,” said Derrick Watchman, Chairman of the National Center for American Indian Enterprise Development in a news release. “We are proud to honor this extraordinary group of leaders, and I am excited to see what the future holds for them.”

Anne Jacobs is currently the principal of DCIS in Fairmount, in Denver, Colo. She’s the only Native American principal out of the 223 public schools in Denver.

She was assigned to DCIS after it was scheduled to close for poor performance, according to her resume. After one year at the helm, the school was named a Top Performing and High Growth School in Denver, with over 80 percent of the students receiving free and reduced lunches. It is one of six schools in Denver to be named an American Indian Focus School, with a mission to ensure American Indian students have access to an equitable education by providing support in a culturally responsive manner, according to her resume.

Her career has been in education, with multiple recognitions and community service initiatives. In 2014 she was name Denver’s Educational Change Agent of the Year. She received her Bachelors in Communications from St. John’s University, and her Masters in Administration from the University of Denver.

Jon Red Corn is currently the co-founder, director of operations and production manager for Blue Star Studios in Pawhuska. With over 15 years of experience in design, fabrication and construction, he has worked with tribes such as the Osage, the Chippewa Cree Tribe, the Pueblo of Jemez, the Lakota Rosebud Sioux Tribe and others.

Red Corn’s experience ranges from small-scale residential construction and remodeling to large high-performance, green building designs, according to his resume. He is a member of the Pawhuska District and also helped to design the new dance arbor in Pawhuska.

As part of his community work in the past, he helped assist ravaged neighborhoods in New Orleans after hurricane Katrina, and helped to replace a destroyed home in Greensburg, Kans., after an F-5 Tornado tore it down. His expertise and passion are “for high quality, very energy efficient, healthy buildings that are beautiful, durable, affordable and easy to maintain.”

He received his Masters of Architecture from the University of Kansas, School of Architecture and Urban Design. He is also the son of Assistant Principal Chief Raymond Red Corn.

Jones lives in Katy, Texas, where he is the Chief Information Officer and Vice President at Comfort Systems USA, Inc., a mechanical contractor and services provider, according to a news release. He previously worked for J.P. Morgan Chase & CO as Vice President and Global Director of Investment Bank Disaster Recovery Technology. He is a Project Management Professional, and has an MBA in Finance from the University of Houston. Jones is also an avid runner, and completed the 2015 Boston Marathon, according to the release.

The recipients received their awards on Nov. 18 at the Pojoaque Pueblo’s Buffalo Thunder Resort and Casino in Santa Fe, N.M.

[This story was clarified on Dec. 2 to include Jeremy Jones as a "40 Under 40" recipient.]