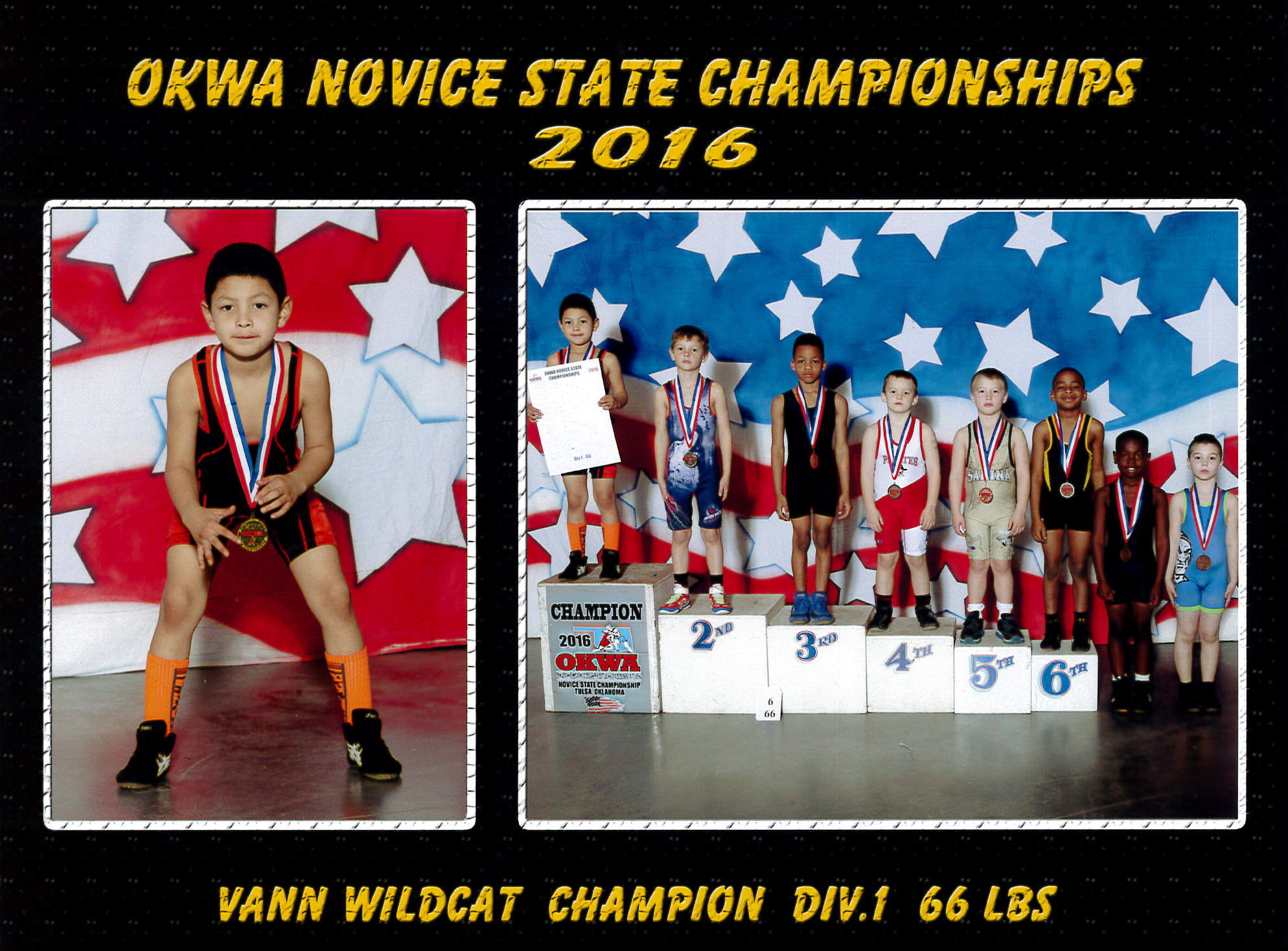 “At first he didn’t think it was a big deal when he won first place but the more people congratulated him, then he started to realize that it was important,” said his mother Mary Wildcat. “After Vann’s final match at Novice State, we were all hugging him and congratulating him and he looked up at us and said ‘Thank you, did you know that the Super Bowl is this weekend?’ We all got a kick out that.”

The Oklahoma Kids Wrestling Association’s state championships were held on Feb. 6 at the Expo Square Pavilion in Tulsa. The tournament is a double elimination tournament with first-time wrestlers from all over the state. This is the second year in a row an Osage youth has won the championship. Last year, Logan Cass won first place.

Wildcat wrestles for the Pawhuska Elk’s Lodge team and is coached by Bruce Cass and his dad, Darrell “Beaushee” Wildcat.

Vann has been wrestling since he was four years old but did not start competing until age five. He practices every Monday, Tuesday and Thursday from 5:30-7:30 p.m. with his teammates but continues to practice at home with his brothers Lesharo and Jimmy. Vann is in the first grade at Indian Camp Elementary school in Pawhuska.

“I am very proud of Vann, he loves to wrestle. He always wants to wrestle with his brothers at home, so when he competes he makes it look easy,” his father said.

Wildcat has wrestled in Barnsdall, Blackwell, Tulsa, Will Rogers and Novice State and has won first place in his class in each tournament. His favorite wrestling move it the headlock, he said.

Vann practices with fellow Osage youth such as Logan, Corlin and Will Cass, and Isaac Williams and Trenton Reese.

He also enjoys football, baseball and soccer, as well as grass dancing at powwows.

Vann is the son of Beaushee and Mary Wildcat; his Osage name is Wah-Kon-Tiah and he is from the Wah-Xah-Ko-Li District (Pawhuska).

The Oklahoma Kids Wrestling Association is an organization that promotes the sport of wrestling to all ages, giving children the chance to preform at competitive levels. Participants perform in multiple tournaments during wrestling season in hopes to make it to the Novice State Championship.