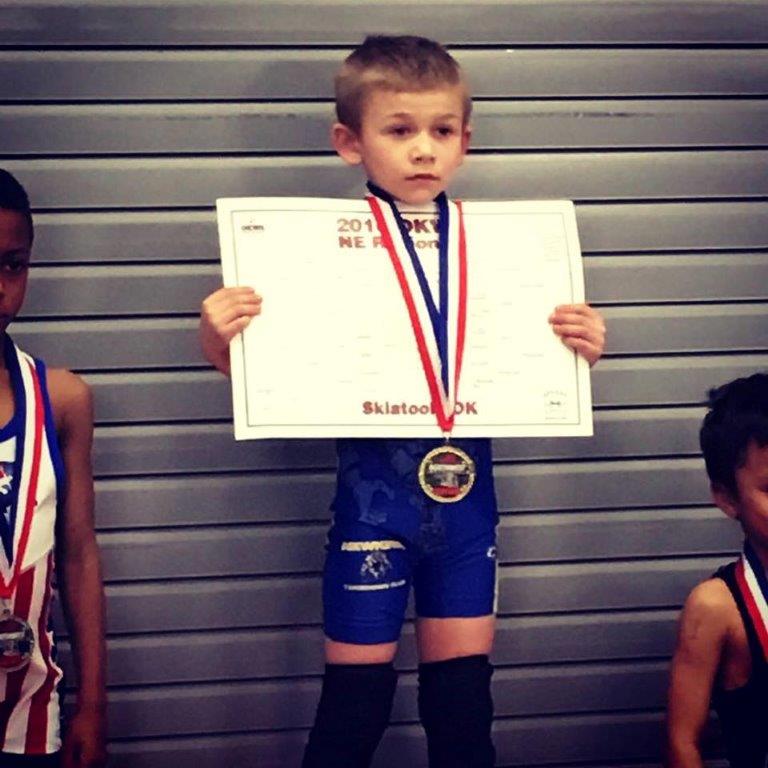 “He has been concentrating on his techniques and conditioning with the help of his older brother Jake who also wrestles,” said his father Bo Spotted Bear. “He has really turned it around this year and has become a better wrestler from it.”

From Newkirk, Okla., this is Sammy’s second year wrestling with Newkirk Takedown, coached by his father Bo, Dustin Mills and Cody Jones. He is in first grade and his parents home school him.

Sammy has won many tournaments at Division I and Division II levels; he weighs in at 43 pounds.

He has participated in 24 tournaments and won a total of 17 medals, and he did not give up one point in his win at Northwest Regionals.

Some of his biggest fans include his Uncle Jeremy, Uncle Cory and “Auntie” Tori Spotted Bear.

“This was the first year I got to actually watch him wrestle,” said Cory Spotted Bear. “I was surprised, but proud that he stayed focused and kept pushing to reach his goals. He is getting technically and fundamentally better with each match he wrestles. I’m just so proud of his accomplishments in a sport he loves.”

When he is not working on his wrestling fundamentals and strengthening, Sammy enjoys fishing with his dad. When he has his schoolwork finished he enjoys playing outside. He also plays baseball and football. He also likes to go to Caney, Kans., to visit with his grandparents Laray and Aaron Brake. He loves exploring with his Uncles Chet and Cole.

“I like pinning people, it is fun,” Sammy said. “I want to tell my brother thank you for helping me at home and my coaches and everyone who came and watched me.”