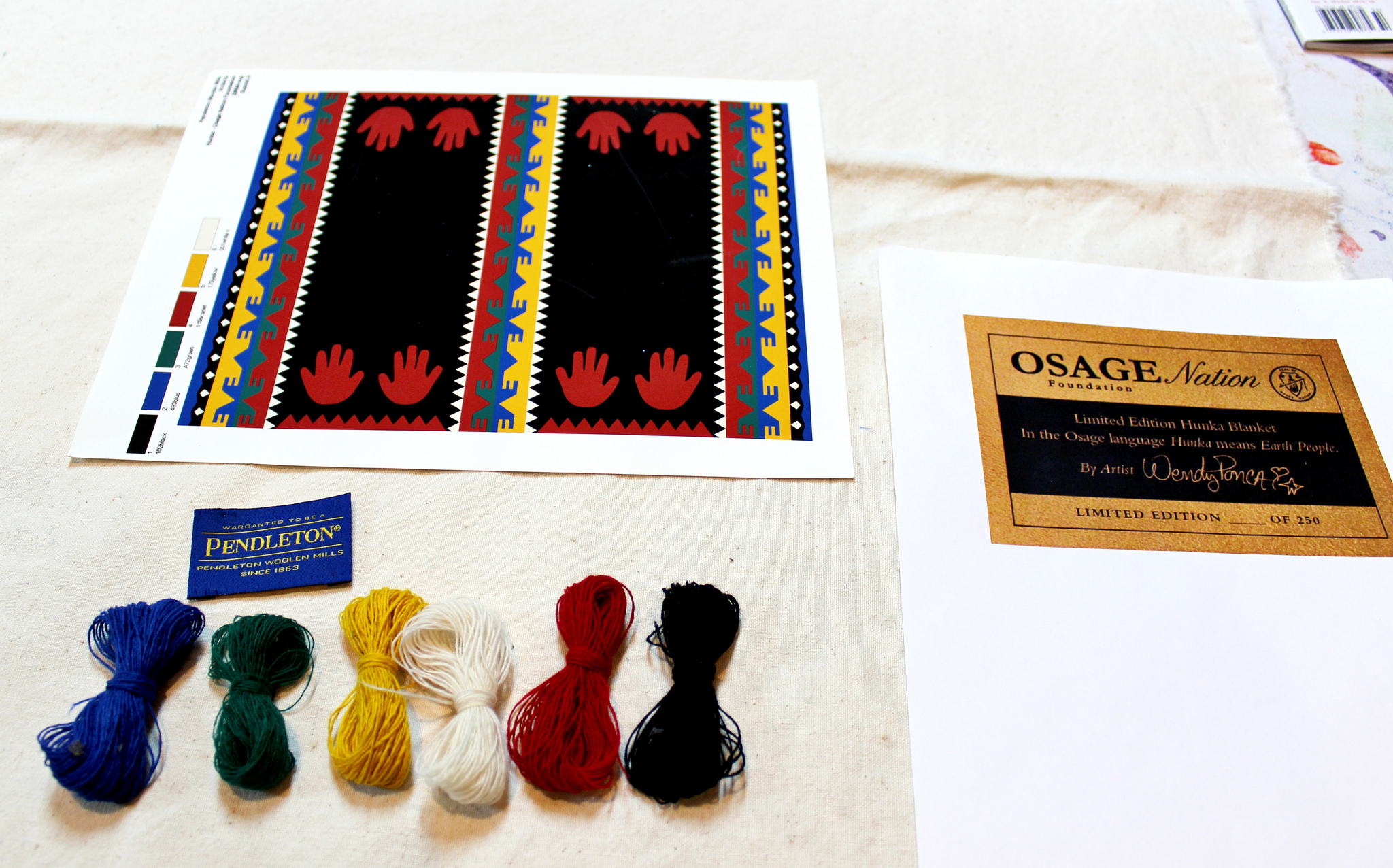 Pendleton blankets, a daily necessity and luxury for Osages dating back to the early 1900s, are now only worn for special occasions, In-Lon-Schka and for giveaways.

Wendy Ponca, renowned Osage artist and clothing designer, completed her design for a limited edition Pendleton blanket for the Osage Nation Foundation in hopes to raise money for the nonprofit and its many community-based programs and camps.

The blanket is called “Hunka,” meaning Earth People in the Osage language. The base color of the blanket is black, with red, green, blue and yellow ribbon work with a saw-tooth edge running down the sides and the middle. Patterns of red hands run down the sides, making for a very colorful effect on top of the black.

“We are very excited about the Pendleton blanket Wendy Ponca has designed for the Foundation,” said Osage Nation Foundation Executive Director Bill Webb. “We were fortunate to have someone with Wendy’s talent that we were able to commission for the piece. It is a beautiful design and as a limited edition it will create an exceptional keepsake. The demand has been very strong already so we are very likely to sell out very quickly.”

The Foundation will have 250 of the blankets made, including a tag to commemorate the number of the blanket a person owns. The blanket is a standard sized Pendleton, which measures 60 by 80 inches. The front and back design is the same on both sides and when the top half is folded down, the hands will all be in the same position facing up when worn, Ponca said.

The weaving processes at Pendleton Woolen Mills have automated looms; the colors become muted where there are more than two colors being woven horizontally. This is the reason she chose to use the same pattern on the back and the front of the blanket, she said. The blanket will have the brightest and truest colors.

“I have ideas for the next blanket, if the opportunity should arise for another nonprofit, called the ‘Tzi-Zho,’ meaning Sky People,” Ponca said. “I only want to design these blankets for nonprofits.”

The Hunka blankets will arrive in late April or early May and may be purchased on the Foundation’s website at http://www.osagefoundation.org/. The Foundation will ship the blankets immediately upon ordering, Webb said. The Foundation can communicate through Facebook, email and phone to those who have reserved blankets.

Ponca was asked in 1996 to design a Pendleton blanket for the American Indian College Fund for their Hope Series. The blanket was called “Wah Sha She.” The blanket was also a limited edition, producing only 1,200.

She sells pieces of her art in museum gift shops in the Peabody Essex Museum, Portland Art Museum, Philbrook Museum, and NMAI throughout the year.

She currently is participating in the art show Native Fashion Now featuring her designs for her Earth and Sky people wedding clothes. The show began at the Peabody Essex Museum in November 2015 and lasts until the end of this month. The show will travel to Portland Art Museum on June 4 and run until Sept. 5. Next it will travel to the Philbrook Museum of Art in Tulsa from Oct. 2 – Jan. 15, 2017. The show’s last stop will be at the NMAI in New York in late February 2017.

Ponca is a graduate of the Institute of American Indian Arts in Santa Fe, N.M., the Kansas City Art Institute, and Southwestern College in Santa Fe. Her art career has included being the director of development at the National Indian Monument & Institute in Jenks, Okla., an art instructor at University of Las Vegas, Nev., and a professor of Fiber Arts and Design at IAIA.