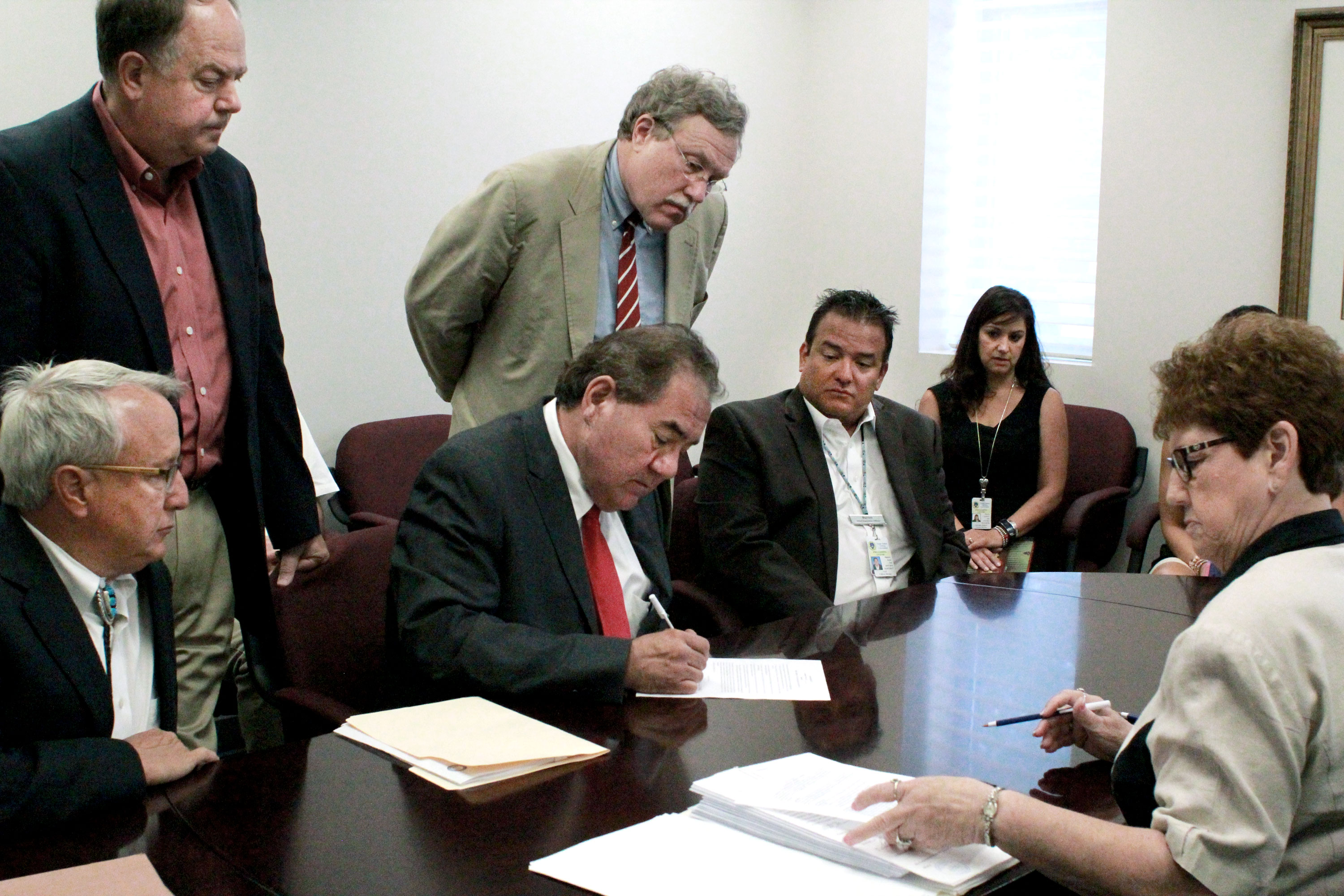 The transaction took place in a downtown office at Musselman’s Abstract Company on June 8.

Standing Bear sat across from Elliott and began signing documents as she explained each one. The room was quiet as everyone watched the chief.

Once he was finished he shook hands with Elliott and everyone in the room as everyone expressed their congratulations to the nation. The land purchase has been called one of the largest in Osage County.

“I think during the event it occurred to me, as I was signing the documents, that Osage chiefs have been signing similar documents in the past but they were always giving our land away or selling it for the wrong reasons,” Standing Bear said. “It was an honor on behalf of the Osage people to be signing to buy land.”

“It’s a complete reversal and I am so grateful to the almighty for being able to carry that out for our people. That’s how historic it is for me.”

The Nation will be holding a celebration for the land purchase in the near future and Turner, federal officials and others have been invited.

“Once we got to that point they were so excited down there, especially Mr. Turner,” Wildin said. “Taylor Glover, who runs a lot of stuff for Mr. Turner, really thought this was cool … It just makes it such a good deal for me because you won, they won. Mr. Turner doesn’t want to just sell his land to anybody, because he’s put so much into it and he has a dream for how this land is to end up.”

Wildin said all the parties involved in the bidding were large landowners and have different interests as to why they own land, “and they all wanted to own this ranch,” he said.

“I will tell you, I’m pretty sure now, I don’t want to speak for you folks [the Osage], but I’m pretty sure everybody in the deal knew that they had one chance in their lifetime to buy this ranch, and that’s what changed everything,” he said. “That’s very unique.”

Standing Bear and Red Corn declined to name the competing bidders due to confidentiality agreements.

Red Corn said he was proud the way the nation responded to the opportunity.

“Every team that chief and I rely on to actually do the heavy lifting came through in every imaginable way or we would have not enjoyed this moment,” Red Corn said.

Standing Bear said in January they were working day and night on the bidding process.

“This event illustrates what can happen when the goals of the Executive Branch and the Congress are perfectly align. Congress was a great partner on this and they cooperated in every way necessary in a very timely way to make this happen,” Red Corn said.

“So did the gaming board,” Standing Bear added.

“We could not have done this at all unless they [gaming board] … we fully briefed them in late December through early January, culminating in the Jan. 11 vote to support this activity so we would have no mortgage on this land, no debt payment,” Standing Bear said. “It’s all being paid for from the casino revenues so we have a fresh start on this property.”

The document stamp revealed the purchase price of the Bluestem Ranch was just over $74 million.

Standing Bear said they had a range that was approved by both the ON Gaming Enterprise Board and the Congress. He said the Congress came to their range by each member giving their individual high and low and those were averaged and agreed upon as a body and matched up with what the Executive Branch was proposing and what the Gaming Board had approved.

“It was just another example of all the pieces working together for a purpose on a certain time frame. It was amazing. We had one mind on this,” Standing Bear said.

The loan was for $175 million and the gaming board agreed that $75 million would be used to purchase the ranch.

Gaming Enterprise Board Chairman, Mark Simms, said it was one of the greatest things the board could have done.

“It came at an opportune time when the casino was doing good, where we could afford it. We were more than happy to guarantee it, I think that between the chief and the congress when we made this move with the chief’s plan for it, I think we will really move forward and become a reckoning force here in Pawhuska,” Simms said. “A lot of people are very happy about it and it’s getting back the land base but it’s also creating kind of a preserve for animals and whatever the chief and the [Bluestem Ranch] LLC board decides to do. We’re in full support and we’re able to start to build our casino and we help to hope out even more once we get our new casino built.”

Standing Bear said it was part of the deal they made in January to the gaming enterprise board.

“What people don’t realize is that in this 30-day period in January, it wasn’t just about the ranch purchase. It was about meeting a series of agreements on the size and the amount for the new Tulsa casino. All that was agreed upon in that 30-day time period. So all those issues that people have been arguing about for three years we compressed within that 30-day period of time. And we agreed on everything, and that’s why it’s so amazing,” Standing Bear said. “It was more than just the ranch purchase, it was about … what is the amount we are going to borrow for the expansion of the north Tulsa casino. That was all part of the package, that’s why it was a $175 million loan. They call it a credit facility and that was an amazing thing to see, that all three of us came together.”

Standing Bear said he has no regrets on purchasing the land. He said there is a shortage of funding to purchase the bison and that it was an immediate issue he hopes the new Congress will address in July.

“My stated purpose for this was to acquire land, provide a home for the bison that are owned by the Osage and have an educational opportunity for our children,” Standing Bear said. “And I understand it takes a profit making operation to support that on the ranch. I learned that when I was a Trustee for the Nature Conservancy.”

He said the Nature Conservancy had to financially support the buffalo with cattle operations because “you can’t have a preserve without part of your land making a profit.”

“I’m ready to work with the [Bluestem Ranch] board and the Nature Conservancy said they are going to work with us, but the board has not met with me or the Conservancy yet,” Standing Bear said. “They were concerned about the lack of money and I agree 100 percent. They need more funds.”

Standing Bear said they originally set it up in the 30-day time session but as Congress met for their Hun-Kah Session in March, other needs arose. He said he has a report from the treasury and there is approximately $700,000 unencumbered and would not put the nation in a financial bind. He said the money is available.

“I hope the Bluestem Board and the ON Congress supports that amount to purchase the bison immediately,” Standing Bear said.