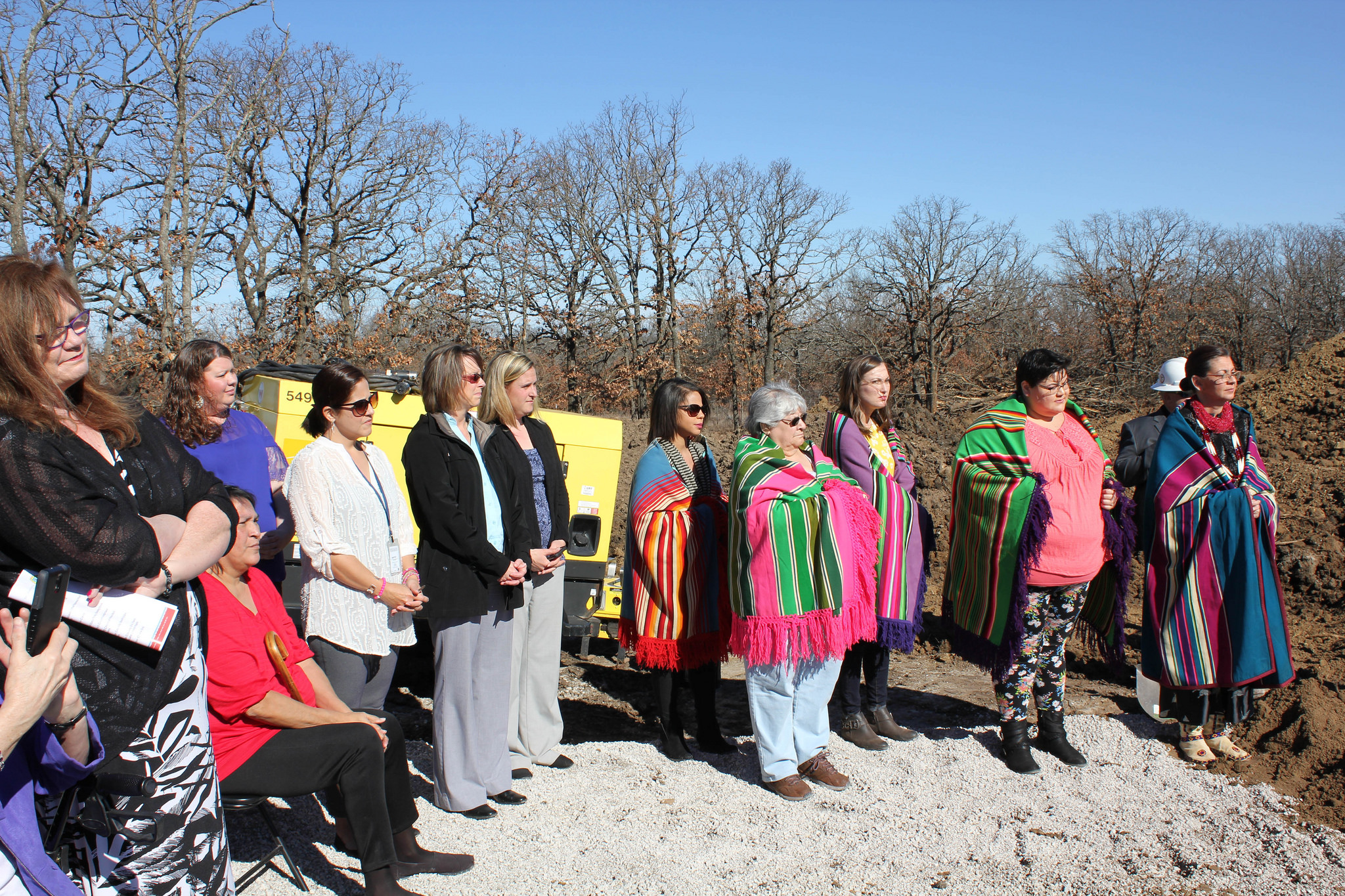 By summer’s end, a new women’s domestic violence shelter will be completed and open to serve the Osage Nation and other community members who need to escape an abusive living situation.

On Feb. 22, ON officials, area government and law enforcement officials attended a groundbreaking ceremony for the planned shelter that will be built at an undisclosed Pawhuska location. For safety and privacy concerns for shelter clients, locations of these facilities are typically not shared with the public.

The Nation’s Family Violence Prevention Department will be managing the facility being constructed on ON tribally-owned land. Heavy construction vehicles worked to clear out shrubbery and move dirt while the groundbreaking ceremony attendees commemorated the project’s start.

Olivia “Libbi” Gray, FVPD director, said the new facility is crucial because constructing a bigger building means the department can serve more people and to better ensure privacy while female clients – and children in some cases – escape a violent household, recover and plan their next steps.

“We have a shelter that is currently located in a neighborhood so there is little confidentiality or security as to its location,” Gray said. “This is a less than ideal situation for our guests. In addition, it is a small three-bedroom home so as you can imagine we are very limited as to how many people we can serve at one time, especially those victims that come to us with one or more children.”

For the new shelter, Gray said it “has five bedrooms and they are larger bedrooms, the guests will have room for activities, computer stations to perform their job and housing searches as well as to update their resumes and improve their computer skills, we will have space for communal meals which we don’t have now and this will help our guests to build a sense of community with the other guests in the shelter. The new shelter will also have an office, which is something the old shelter does not have, so trying to work a case and maintain confidentiality is a problem for our advocates. Finally, there will be play space for the children."

Principal Chief Geoffrey Standing Bear said the shelter construction will be covered by federal Native American Housing Assistance and Self Determination Act (NAHASDA) funding already awarded to the Nation. Under the U.S. Department of Housing and Urban Development, NAHASDA funding opportunities are available through applications for Indian Housing Block Grants and Title VI Loan Guarantee programs, according to its website.

At the groundbreaking, Standing Bear also noted the Nation will also build a separate Primary Residential Treatment (PRT) center for women suffering from substance abuse on the same property and $800,000 in NAHASDA funding will be used to build both facilities.

Gray said the shelter facility will serve both Osage and non-Osage clients, which she calls guests at the shelter and said her department plans to expand its services.

“Our department serves all victims of domestic violence, sexual assault, stalking, teen dating violence, human sex trafficking. We serve anyone who needs our help,” Gray said. “Over the next six months, we’re going to be expanding sexual assault services and human trafficking services. Usually when a domestic violence client comes in, we find out something else has happened.”

Gray said she also wants services expanded to include transitional living skills to help clients adjust their lives after leaving abusive situations. “Many times battered women go back to their abuser or they get into another violent relationship. On average, a woman will go back seven times before she either leaves for good or she is dead. We want to give them the skills they need to get through everyday life so they don’t feel they have to go back to meet their needs,” Gray said.

Gray said the women’s domestic violence shelter should be open to client guests by August or September.

For ON Family Violence Prevention Department services and more information, call its office at (918) 287-5422. The department website is located at: www.osagenation-nsn.gov/what-we-do/counseling-center/domestic-violence