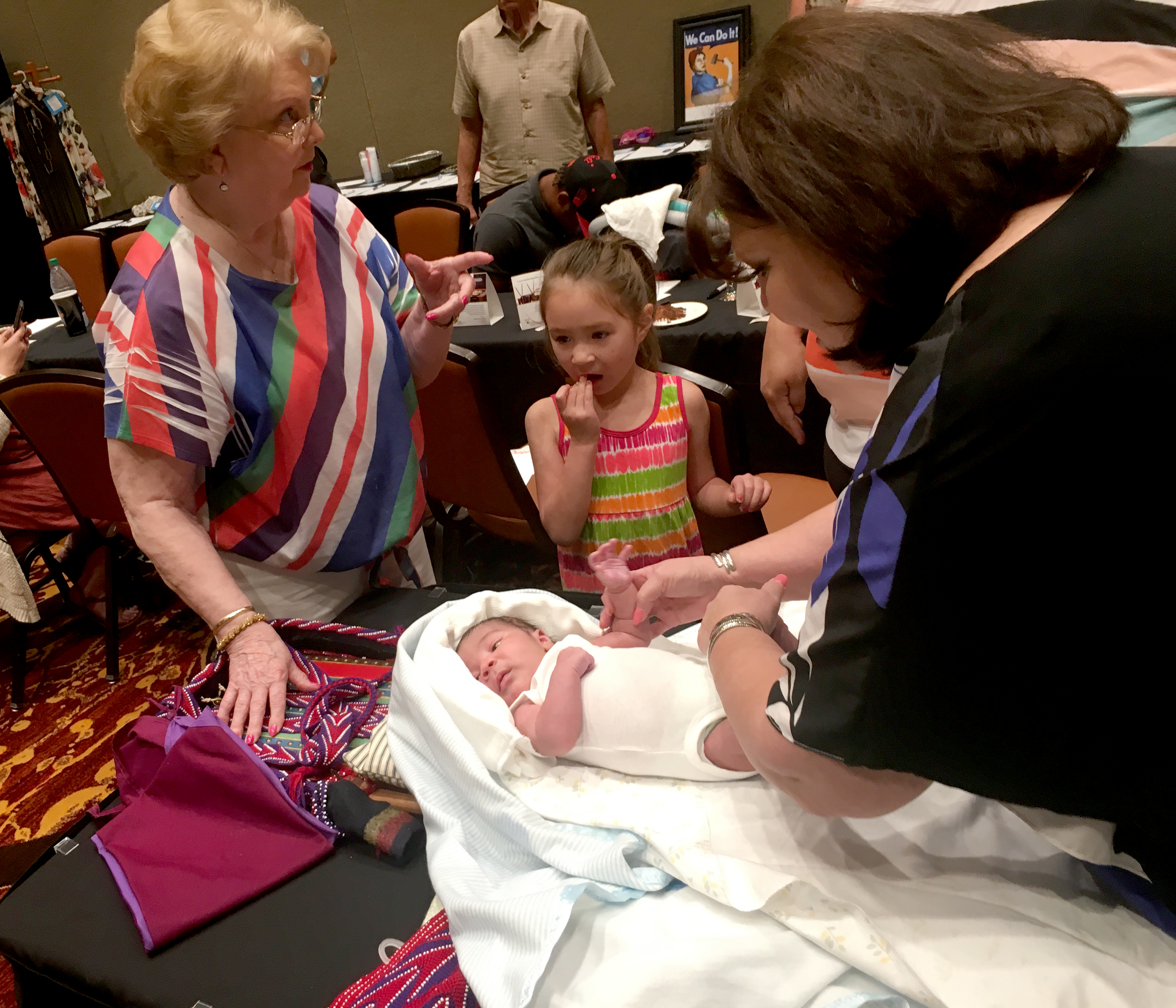 SKIATOOK, Okla. – The organizers of the inaugural Native Professional Women’s Seminar didn’t think anyone would show up. They thought no one would spend their money to benefit Native children. They were wrong.

The event, held from 10 a.m. to 5 p.m. at the Osage Casino-Skiatook, raised $4,500 for the Pawnee/Osage Court Appointed Special Advocates. More than 70 Native women attended.

“I am so overwhelmed by the response. When we started this, we didn’t know if anyone would come,” said Paula Stabler, one of the organizers of the seminar. “To see all these women here is overwhelming. We’re going to have a seminar next year, for sure.”

The seminar began at 10 a.m. with Osage cultural discussions about women’s clothing during In-Lon-Schka, tradition versus trends. Leading the discussion was Stabler, co-organizer Julia Lookout and Rosemary Shaw, CASA volunteer.

An Osage cradleboard demonstration was held, with Stabler and her mother Joyce, showing attendees the process and the cultural tradition surrounding the cradleboard. For the demonstration, three-week-old Carter Hall was swaddled and placed on the cradleboard, then wrapped with an Osage woven belt and other cloths. Hall is the son of Autumn and Quan Hall. His grandmother Marjorie Williams was also on hand to help.

Started in 2009, the Pawnee/Osage CASA program is a nonprofit with volunteers serving at-risk children in county court and tribal court cases in both Pawnee and Osage counties. CASA volunteers are assigned to abused and neglected Native American children in the court system and monitor their living conditions, school activity, cultural activities, and general well-being and report directly to the judge handling the child’s case. Helen Norris has the been the director since 2009.

Tribal judges Terry Mason Moore, Lisa Herbert, Dianne Barker Harrold and Susan Arkekeeta spoke at the seminar about the importance of having CASA volunteers to advocate for Native children in the court system.

Mason Moore, who is a tribal judge for the Pawnee Nation and is part of the legal counsel team for Osage Nation Principal Chief Geoffrey Standing Bear, worked with Norris in 2009 to amend tribal codes to allow CASA volunteers to work in the Pawnee tribal court and also developed training.

“We incorporate the use of tribal traditions in cases whenever possible,” Mason Moore said, adding that it is very helpful to have a CASA volunteer’s written report before reviewing a child’s case, especially whether the foster family is exposing the children to their tribal culture. “It’s very helpful for me to know what the CASA volunteer has experienced with a child.”

The keynote speaker for the seminar was Alton Carter, author of the award-winning book, “The Boy Who Carried Bricks.” Carter spoke about his life, growing up in a family with five children, an absent father and a drug-addicted mother. One after the other Carter described harrowing experiences as he struggled to understand what was happening to him and his family as an abusive uncle tore his family apart. He said at any time through his life, if he would have had a CASA volunteer monitoring his situation and advocating on his behalf to a judge, it would have kept him out of numerous abusive situations. Juggled from one foster home to another, it wasn’t until he had some good role models and caring teachers that he escaped the cycle of abuse. He became the first male in his family to graduate high school, be in the delivery room when his children were born and his children will graduate from high school.

“I don’t know if you’re considering being a CASA worker, but it makes a difference,” he said to the crowd. “Being a CASA can help the neglected and abused with a new start, so they can be good role models, see their children graduate high school and love on their kids.”

A silent auction was held and a drawing for a cedar chest that once belonged to Chief Fred Lookout, full of Osage items, was held. The lucky winner was Curtis Bear.

“My overall feeling about this event; it made me cry,” Norris said. Norris has tirelessly held fundraising events every year to try and raise money for her CASA volunteers. The money helps with gas and other expenses of the CASA offices. “We couldn’t have done this; it was Julia Lookout and Paula Stabler who really made this a success.”