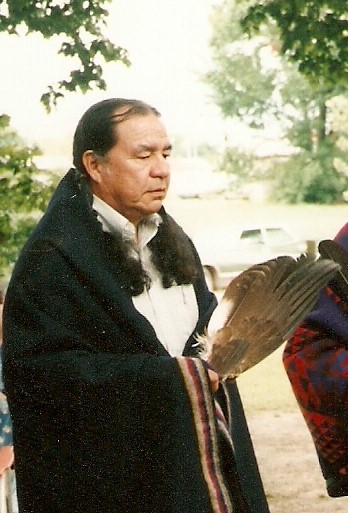 There was a reoccurring theme throughout the four days of mourning for Osage author Charles Red Corn: soft spoken, gentle and kind.

“As we reflect on Charles Red Corn’s life, it’s easy to see what mattered to him – his family and his people,” said his niece Lou Anna Red Corn, who gave his eulogy at the First Baptist Church in Pawhuska on July 27. “Charles Red Corn left this world on July 23, 2017, and this world is a better place for having him, and we are a better people for having known him.”

Red Corn, the author of “A Pipe for February,” the culture column for the Osage News since 2012, and numerous other publications and award-winning works, passed away peacefully at his home surrounded by his family. He leaves behind his wife of 56 years, Jeri, his two children Yancey and Dr. Moira RedCorn, and one grandson, Miles.

Lou Anna told story after story of his love, kindness, and support of his wife, his children, and his beloved grandson. Stories about his wit and humor, his giving and helpful nature, his intellect and knowledge of the Osage culture.

Gray said, “I’m sure you’ve heard this many times, but he never had a cross word with anyone. He was always positive.” He told a story of a young man in Pawhuska who needed a liver transplant back in the days when liver transplants were unheard of. Charles helped him and his brother, former Principal Chief Jim Gray, raise $100,000. The boy received his transplant.

Yancey addressed the mourners: “I appreciate everybody here. My dad would have been glad everybody’s here ... he’s a great man, a great person.”

Charles Red Corn was the second son of five children. His older brother C.R. Red Corn was present, so was his younger sister Kathryn. He was preceded in death by his brothers Jim and Andrew “Buddy” Red Corn.

During Lou Anna Red Corn’s eulogy, she said Charles was baptized in the Baptist church at the age of 9. He and his brothers were championship athletes in high school and held records for five years, three of those years belonging to Charles. When asked why he didn’t play college football he said, “I’m too smart for that.”

When his sister Kathryn attended the University of Oklahoma, she had a roommate who was Caddo by the name of Jeri. “He was charming, witty and so sincere,” Lou Anna said.

During their storied marriage, Jeri supported his second career as a writer so he could pursue his dream. That was when he wrote “A Pipe for February,” a story about murder, lawlessness, and fear during the 1920’s, told from an Osage point of view.

“Charles was a giver, and he gave to anyone in need,” Lou Anna said. “The welcome never wore out in his home ... those were the Osage ways; hospitality, kindness.”

Lou Anna said that more important than his many accomplishments were that he was a good man, a good husband and he was always a good father. “He was always there when he was needed, with purpose and intention.”

Charles Red Corn was buried on the east side of what is commonly known as Lookout Mountain. The Lookout Family Native American Church is directly south of the area.

As mourners descended the east side of Lookout Mountain to the gravesite, the air was hot and thick, perfumed by surrounding wildflowers from a recent rain. Views of the countryside were far on each side. The trek was steep but came to a small clearing, where his casket sat atop large wooden beams. Flowers sat atop his casket, as well as a pink, purple and blue Pendleton blanket. Mourners filed under two white tents, with his wife and children in front.

As his casket was lowered, Talee Redcorn’s voice broke through the silence as he sang an Osage hymn. His son TJ joined him and their voices rang out as mourners wept. As the service concluded, mourners made the trek back up Lookout Mountain. A traditional Osage meal was served at Wakon Iron Hall, and his family and friends shared their final meal for Charles Red Corn.