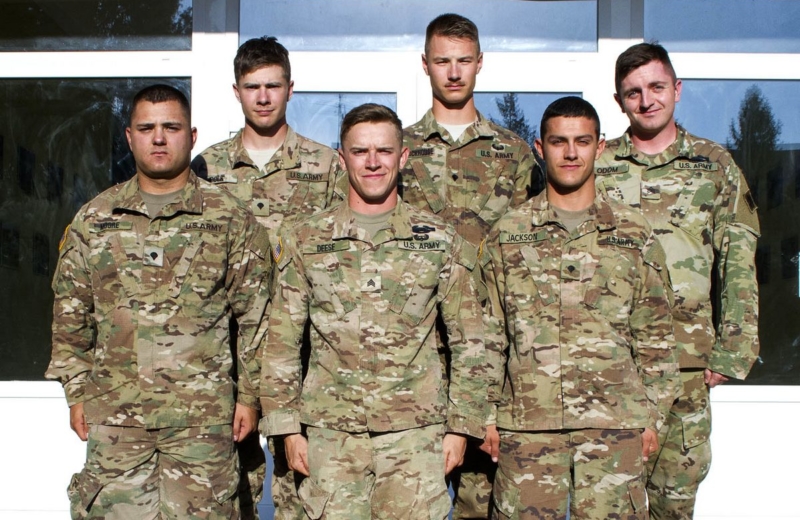 On Aug. 24, Ukraine's Independence Day, Minister of Defense Stepan Poltorak awarded six U.S. National Guardsmen of the 45th Infantry Brigade Combat Team officers the Hero's Award for evacuating people from the burning building in the city of Lviv on July 16, according to Ukranian news outlet 112.International.

In a message from the Ministry of Defense, the six soldiers "were awarded with Honorary Badges for personal bravery, courage, selfless efforts during an emergency, exemplary performance of military duties, and high professionalism,” according to 112.International.

According to military news outlet Stars and Stripes, the soldiers "rescued the occupants of an apartment in Lviv, an hour's drive from the Yavoriv Combat Training Center where they were stationed. They were visiting Lviv after hours, taking in the sights of the historic old town, when they noticed smoke billowing from the building."

Deese, of Crowder, Okla., is also a volunteer firefighter for the town and that job training experience came into play as he and the guardsmen ran toward the building after noticing smoke coming from the structure.

"My first instinct and being in Infantry is to run towards the fire, so we took off down the street and when we got there, people weren't really coming out and everyone was kind of looking and going about their business like it wasn't a big deal, so I'm like 'hey, let's get in there,’" Deese recalled in a July 17 video interview about the fire. "We got about to the third story and then you could see the fire ... it was just blazing. We started knocking on doors, a couple other guys came in with the Unit, about four or five people answered ... they were not aware of the fire and at that point, there was no firemen reported to the scene yet.”

"We started evacuating people" and the local firemen arrived 10 minutes later, said Deese who remained in the building to knock on doors he hadn't reached yet. As the firemen entered with the fire hose, Deese helped them unwind it so they could reach the fire without tangles and delays.

Once the local firefighters started work on extinguishing the fire, Deese and the soldiers left the building. "I just wanted to make sure everyone was going to be out and everyone's going to be safe. It instills in you as a soldier to always be ready and always be there for anyone on the battlefield or not," Deese said.

"Nelson has always been a leader, he thrives on making a difference and loves the brotherhood of fellow soldiers, he possesses something that few possess and has since he was a child," Gayle Deese said. "I cried when he called me to tell me about the fire and what happened and how he reacted when no one else would. I’m so terribly proud of my son and the man he has grown to be. I feel so blessed to be his mother. I wish his grandfather Richard E. Javine was still here to see him; I know he would be so proud of him, his father and his brother are as proud as I am along with his great-aunt, aunts, uncles, cousins, friends and battle buddies. I’m telling you he is one of a kind."