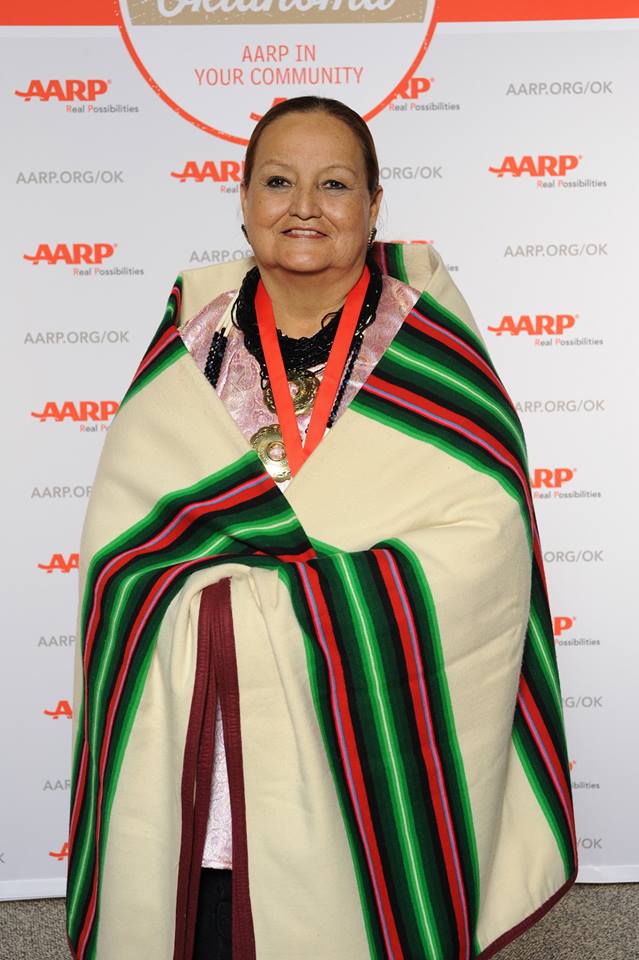 On December 14, 2017, Mary Grayce Gray Bighorse made her journey to be with her Creator. She was surrounded by her family in Tulsa, OK. She left this earth of the age of 66 and will be missed by many who knew her from her many roles in life.

The cultural backbone of the Gray family, she was well versed in many aspects of our traditions. She belonged to the Deer Clan and was named Humpa Toka (Wet Moccasin) by Magellan Whitethorn Green. She also came from the Pawhuska District. She was a teacher of the Osage language, a national treasure at ribbon work, a devout Roman Catholic and member of the Native American Church.

Bighorse was a Lady Singer for all three District ln-Lon-Schka committees, a position of high honor among the Osage. She could always be seen in her trademark sunglasses and shawl, sitting around the drum every summer. She was a devoted wife, mother, and grandmother. She leaves behind her husband Vann Bighorse, and five children: Dana Daylight, Wahwastoas Jacque Wahwassuck-Jones, Walkeen Wahwassuck, John Hopper and Mary Wildcat; and 21 grandchildren.

She was an accomplished seamstress and beader. For decades, she worked with youth through mentoring, cultivation and teaching Native American culture through various Osage Nation programs. She was on advocate for healthy lifestyles by teaching commercial tobacco prevention and keeping tobacco sacred. As an activist, she was part of the Wounded Knee Occupation in the l970's and was part of the American Indian Movement. She is also a former teacher of the Osage language and maker of Osage Cradle Boards. Her quilt art is housed in the Smithsonian and she was part of a national tour along with the best Native quilters in Native America. She was chosen as a recipient of AARP's lndian Elder Honors in 2016. She was a proud descendant of famed Osage Leaders, Wahtiankah, Wayuhawke, Henry Roan, and her parents, the late Andrew (Buddy) and Margaret Luttrell Gray.

Powell Funeral Home was entrusted with the arrangements. Online condolences and memories may be left in the guestbook at PowellFuneralService.com.