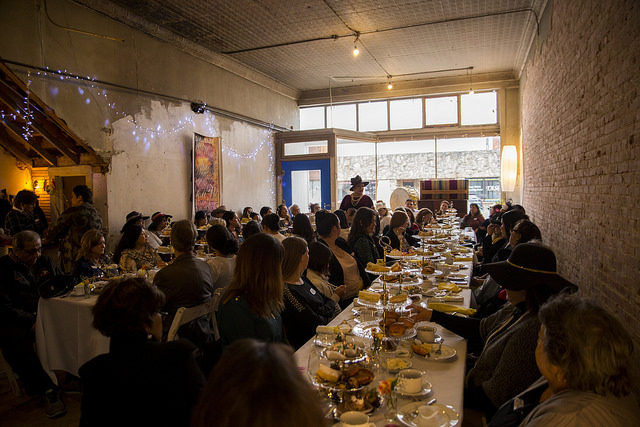 On the afternoon of Nov. 12, Osage women, young and old, put on their best dresses and hats and headed to the Little Rain Song Loft in Pawhuska for an Afternoon Tea, organized by the committee for the Wak’on Owatsi, which in the Osage language means “Women’s Dance.”

The Tea was catered by Ah-Tha-Tse Catering and pastries and other sweets were brought in from Merritt’s Bakery in Tulsa. The Tea was a way to formally invite the women of the Osage community to a dance that Dr. Moira Redcorn and Dr. Robert Warrior had been talking about for years, she said.

Talk turned into action after the untimely death of Blake Sisk on Feb. 1. Sisk, who was only 26-years-old was an aspiring actress and model, and a lifelong participant of the In-Lon-Schka. Her death affected many of the women in the Osage community. Redcorn reached out to her mother Margaret and wanted to honor her in some way.

“I asked Margaret's permission to discuss Blake's death at the tea. Last February, after Blake passed away, it felt like the entire tribe felt the sadness of her loss. It seemed to hit a nerve for so many of us, leaving us feeling somewhat helpless,” she said. “Margaret and I spoke about the possibility of having a dance to honor Blake at that time. I began discussing the idea with other people, and so many people felt it would be a good idea.”

The dance turned into the Wak’on Owatsi, to be held on Feb. 2-3 in the Pawhuska Indian Village under the dance arbor. One year after Sisk’s death.

Osage News: The Wak’on Owatsi committee, as I understand, has been working for months to plan the dance?

Moira Redcorn: “At Gray Horse [this summer], Robert Warrior and I picked up on a conversation about honoring women in our tribe and how we might go about it. We've been having this conversation for 20 years, but this year started to feel like it was time to start doing something concrete, and I started planning the first meeting for early August with a small group who were interested in helping plan things! Then, with the very painful death of my father [Charles Red Corn] in July, I knew I could not wait to start. While I know it is the custom of many Natives to stop and mourn for a year, my father always told us we needed to live and continue living. Rather than postpone that early August meeting, I felt I needed to move forward with the process. This is something I have wanted to work on for a long time, and these series of events led to planning for this dance now.”

ON: The committee had Osage/Otoe-Missouri drum-maker Rock Pipestem make a drum for the dance, a custom many tribes have, and songs are being composed for the dance. Can you tell us more about that?

MR: “As we talked about what sort of dance we wanted, and especially when we started talking to Rock Pipestem about being our head singer, we realized how much we wanted to be able to start thinking about having songs that belong to this dance. A drum is where you put those songs. It is an entirely new process to me, and I think to many of those working on this. Veronica Pipestem [Rock’s younger sister] had the idea of having songs written about various archetypes of women, rather than specific people. For instance, we hope to have a grandmothers' song, a daughters' song, an aunties' song, etc. Our hope is to have one song made for this year.”

ON: What do you hope for the dance in February, and beyond?

MR: “As we say on our website, ‘We are Wahzhazhe people who seek to honor, serve, and enrich the lives of Wazhazhe women and families. We seek to accomplish our intentions through honoring our grandmothers, mothers, sisters, aunties, and other women who have made an impact in our lives and in our ways.’ As for the future, we are primarily focusing on getting this first dance off the ground, but we are hopeful that this is something people want to do again and again.”

ON: Will the tea be an annual event? It looked like it was a success. How did you feel it turned out?

MR: “The Sunday tea was a great success—a tribute to Osage elegance and our love of pastry! But really, the tea was born from a desire to formally invite people in person. We all knew that when you invite someone to do something, you ask them in person. The challenge was that we had set such a short timeline for ourselves and we needed time to talk individually with so many people.  We quickly realized we needed to change our approach. So, we decided to host a tea. Our goal was to make everyone who came feel like a million bucks.”

ON: What is the agenda for the dance? How will this dance be different from any other dance?

MR: “The dance will take place on February 2-3, 2018, starting with a Friday evening tea which originally was going to be at Little Rain Song Loft at 6 p.m. However, due to the great turnout at our last tea which was held there, we have outgrown the space. So, we are currently inquiring about different locations. We'll have a few speeches and some honoring of Osage women. Saturday at noon we’ll have an Osage dinner that we think will be unique in that it will be prepared and served by Osage men. We will then dance in the afternoon and evening. The main difference between this dance and other Osage dances is that men, women, boys, and girls will be welcome to be seated on the benches at the arbor, and we’ll dance together around the drum, sort of in the way people do on family songs during our June dances. We are not planning a giveaway; we hope to have more of a social dance. We know it will be cold, and we have some plans to serve hot chocolate, coffee, and tea to keep everyone warm. And I know a lot of ladies are excited about getting all of their best blankets out to keep warm. We are also planning on renting heaters, and encouraging people to stay comfortable.”

ON: Is there anything the Wak’on Owatsi committee would like to add for readers and attendees?

MR: “Our hope is that all Wahzhazhe feel welcome and special. We would love to see many little girls out there. We will do our best to honor them and create a beautiful moment.”