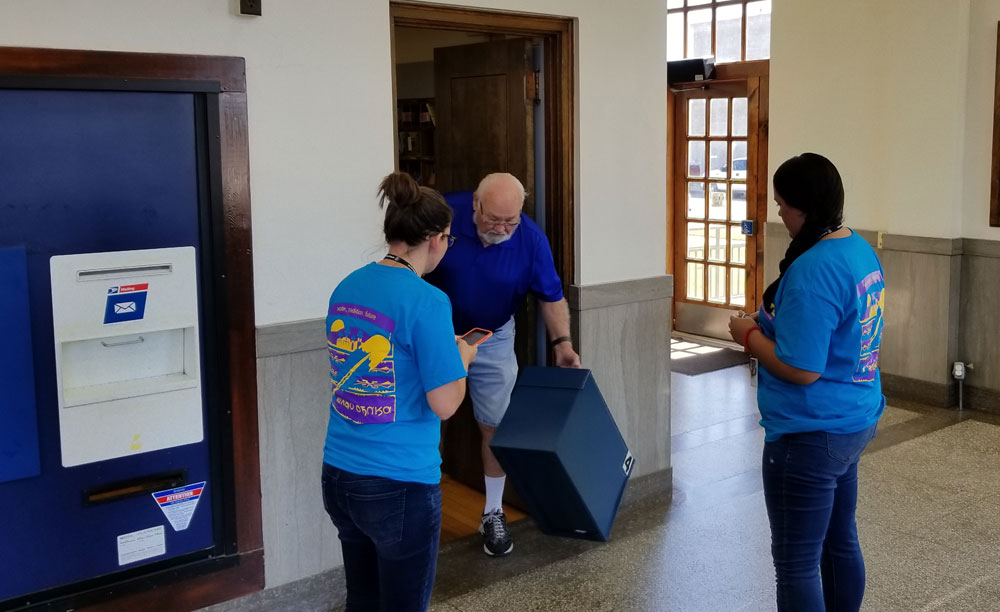 At 10:30 a.m., Osage Nation election staff retrieved the absentee ballots from the Pawhuska Post Office where they were kept after arriving in the mail cycle.

With an ON police escort, Election Supervisor Alexis Rencountre and Assistant Election Supervisor Courtney Piearcy signed for the ballots, which were deposited into a locked metal box kept by postal staff until the retrieval. The election staff also retrieved the June 1-2 early voting ballots that were kept in the Election Office vault before arriving at the post office.

According to the last update on absentee ballot counts May 29, the Election Office reported 1,091 ballots were received in the post office per business reply mail reports generated by the Post Office.

Before leaving the post office, Piearcy collected a few ballots that arrived just in time that morning. Among the ballots, one mailed from Brazil, she said.

All absentee and early voting ballots were then transported up to the ON Museum where this year’s election poll is stationed.

Voting is open until 8 p.m.

Rencountre said a volunteer staff of six will be working at the poll to greet and check-in voters along with Election staff and the Election Board members. One candidate, Thomas Trumbly, requested to have a poll watcher in this year’s election, she said.

Throughout the day, election workers and ON police will also be monitoring and enforcing the “No Electioneering” rule, which prohibits activities within 300 feet of the polling place (museum) where a person’s vote may be persuaded. According to the Election Office, examples of electioneering include: distributing written or printed campaign material; wearing or possessing campaign signs, stickers, buttons, hand fans, etc.; talking about voting for or against a particular candidate or issue; candidates and their campaign committee members greeting voters as they approach the polling place.