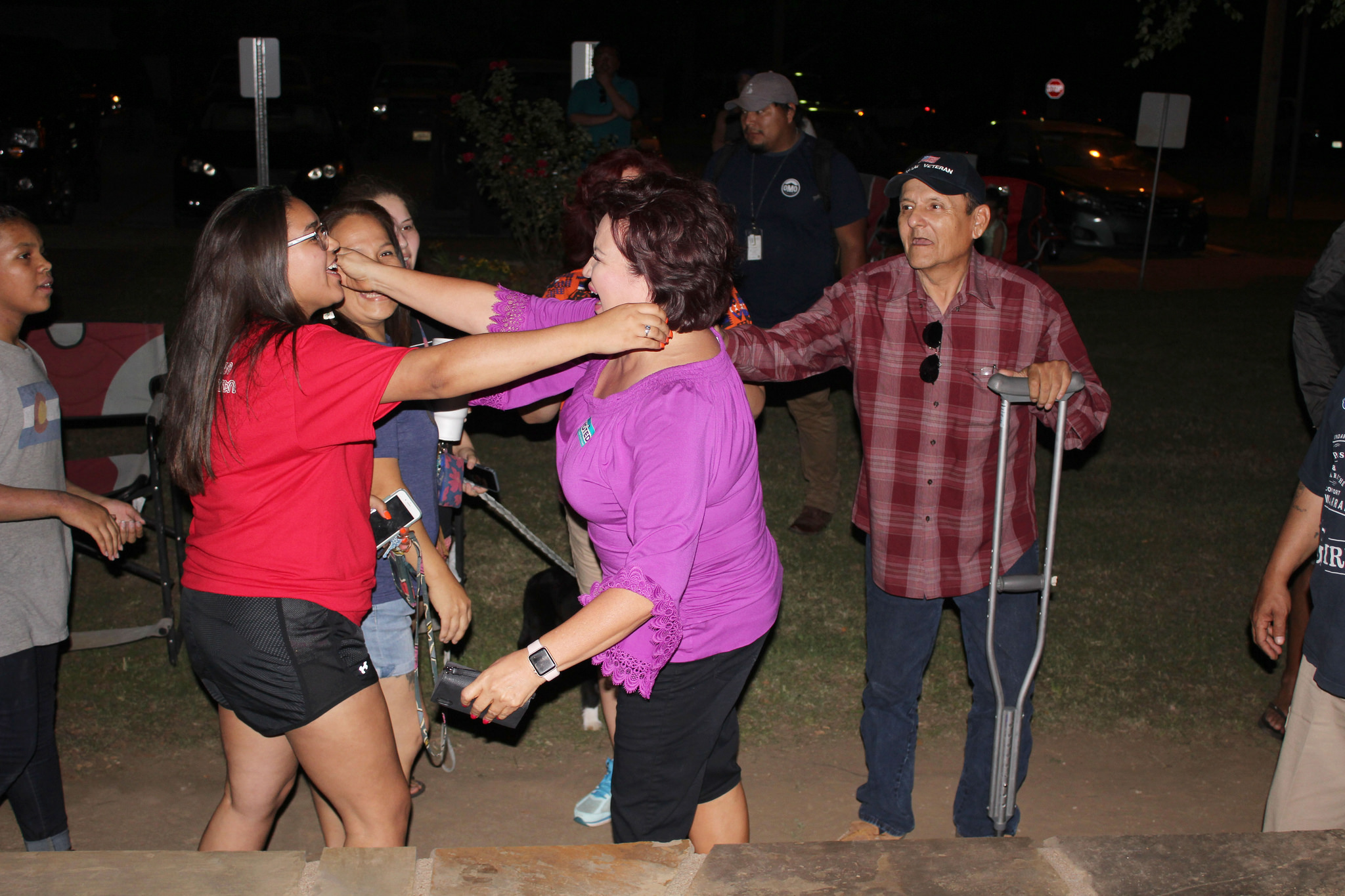 Photo Caption: Family of Margo Gray congratulates her after the election results were posted on June 4. CHALENE TOEHAY-TARTSAH/Osage News

For the second consecutive election, only three incumbents retained their seats on the Osage Minerals Council.

According to unofficial results announced around 10 p.m. on June 4 in front of the minerals council chambers to a chorus of cheers and lulus, Talee Redcorn, Andrew Yates, and Chairman Everett Waller will be serving another four years on the Osage Minerals Council.

Pending certification of the results, joining the three holdovers on the Fourth Osage Minerals Council will be Susan Revard Forman, Paul Revard, Marsha Harlan and Margo Gray, who were all elected to their first term, plus Myron Red Eagle, who will be serving his second term. Red Eagle served on the second minerals council and made an unsuccessful re-election bid in 2014.

Dedicating her win to her maternal great-grandfather Henry Roan, a casualty of the Osage Reign of Terror almost a century ago, Gray said the election results were a sign that Osage shareholders are looking for a different approach to the mineral estate.

“It’s real simple: we have a lot of work that needs to be done,” she said. “We haven’t worked with our constitution and it’s time we do that. We have to unite our constitution and our government with our minerals council and I think we’ve elected some strong people who will be able to do that. I’m glad just to be a part of that.”

Cynthia Boone, one of the three incumbents to be re-elected in 2014, finished ninth.

Galen Crum, the third incumbent to get re-elected in 2014, chose not to seek another term.

Voting for the eight Osage Minerals Council seats is restricted to tribal citizens older than the age of 18 whose names appear on the quarterly annuity roll at the Bureau of Indian Affairs’ Pawhuska Agency as of the last payment. Although every eligible shareholder may cast a vote, each ballot does not necessarily carry the same weight. Each ballot carried the same value as the voter’s headright interest as shown on the last quarterly annuity roll, hence all of the vote counts ending with a fraction.

The total number of votes cast and a breakdown of absentee votes versus in-person votes were not made available on election night. When reached via phone on June 6, Billie Ponca, the supervisor for the minerals council’s election board, said she would not have the numbers available until after consultation with True Ballot.

Representatives for True Ballot, the Maryland-based third-party contractor hired by the minerals council election board, did not return phone calls by press time.