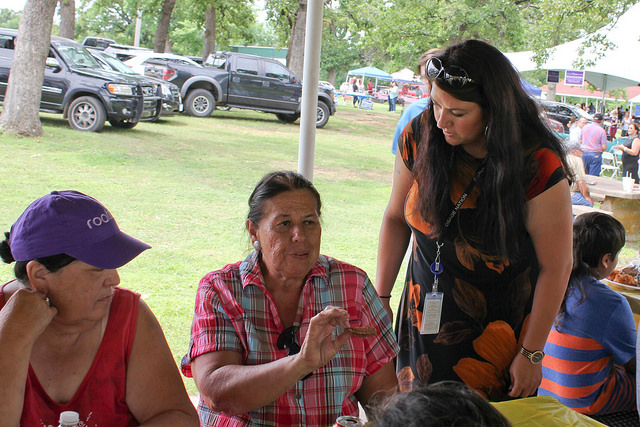 Two Osage Minerals Council candidates are questioning the outcome of the June 4 election.

Both are claiming the election violated the procedures laid out in Part 25 of the Code of Federal Regulations and should, therefore, be set aside.

Specifically at issue is whether the Bureau of Indian Affairs interfered on Election Day. According to the complaints, Superintendent Robin Phillips sent at least one employee to assist the Osage Minerals Council Election Board by updating both the voter roll and address list on Election Day after multiple voters went to the Pawhuska Agency to verify their headright shares.

Voting for the eight Osage Minerals Council seats is restricted to tribal citizens older than the age of 18 whose names appear on the quarterly annuity roll at the Bureau of Indian Affairs’ Pawhuska Agency as of the last payment.

Under Part 25 of the Code of Federal Regulations, any challenges or disputes to the voter roll are supposed to be addressed at least three days prior to the election.

According to the unofficial results published by the Osage Minerals Council Election Board, 937 ballots were cast in the June 4 election. Eleven absentee ballots were returned to third-party election vendor True Ballot and 36 more were returned to the board. Despite about 50 absentee ballots being sent out with questionable postage or missing an outer return envelope, none were among the uncountable ballots.

The Code of Federal Regulations only spells out recount procedures for the Minerals Council Election Board. It does not include provisions for completely throwing out an election’s results, so Heskett and Boone are preparing to possibly take their challenge to federal court.

“We’re not asking for a recount,” Heskett said. “We’re asking if the process was interrupted and if it was, to what degree. Plus, you had the BIA coming over there. There was a number of things that went wrong.

“When I heard they opened the ballot box up … you just don’t do that. A few years ago, when the BIA was approached about something regarding the election, they didn’t even step in where it was going on. When did the rules change?”

Media inquiries to the Pawhuska Agency were referred to BIA spokeswoman Nedra Darling, who could not be reached by deadline.