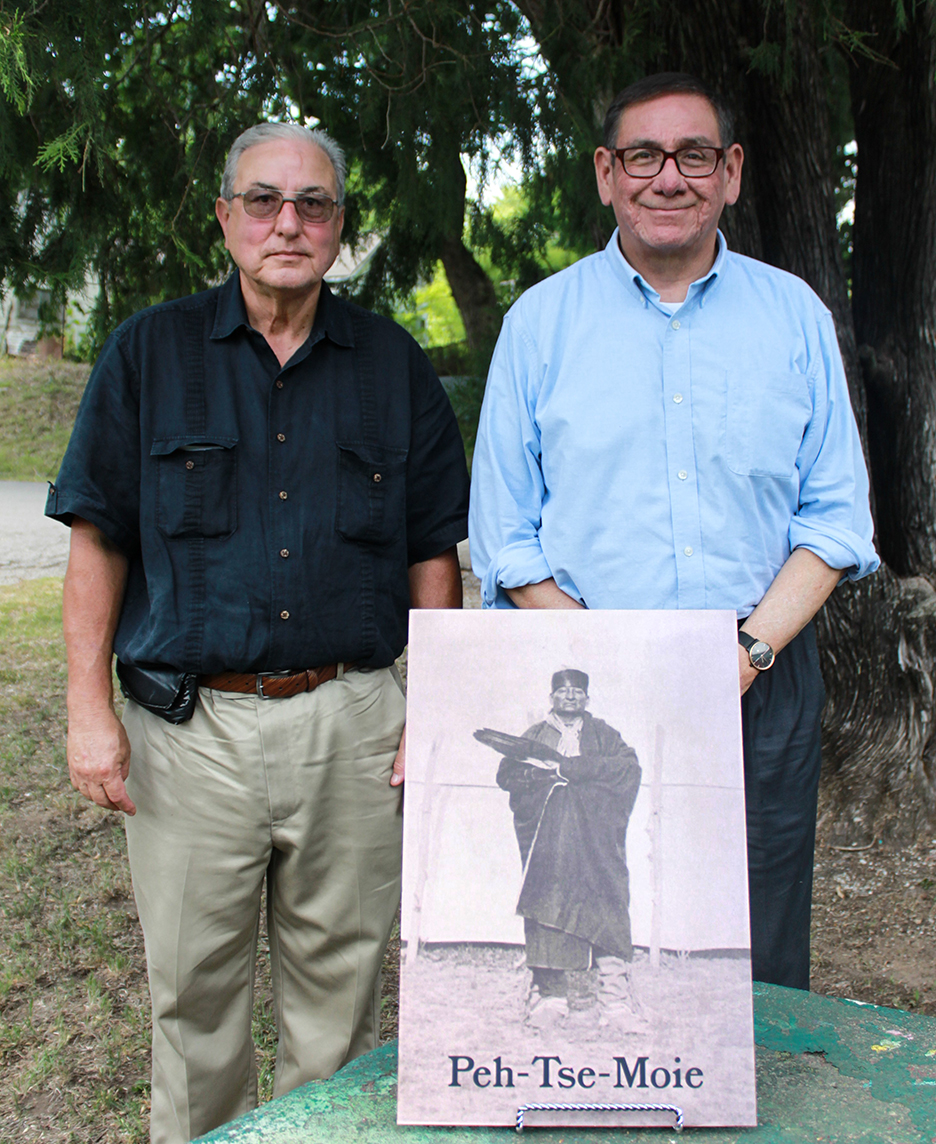 Photo Caption: From left: Scott Lohah and Osage Congressman John Maker spoke at the Hominy American Indian Festival on May 19 about their relative, Peh-Tse-Moie, who donated the park to the city of Hominy. Courtesy Photo/Roseanne McKee

At the first Hominy American Indian Festival held May 19 at Peh-Tse-Moie Park in the city of Hominy, guests, and relatives of Peh-Tse-Moie gathered to remember the man and his generous gift to the city. Although there were storms before and afterward, no rain fell during the festival.

With help from retired Congressman Mark Simms, a photo of Peh-Tse-Moie was provided, which will be placed in the park.

Osage Congressman John Maker, who is a relative of Peh-Tse-Moie, addressed the festival guests.

“Hominy was a great place to grow up,” and the park was a big part of this, John Maker said.

“When I was a little boy, we’d all come to this park and play and go down exploring in the creek. Sometimes we only had fifty cents but that was enough to go swimming and go to the movies all in one day, so at that time, fifty cents would go a long way,” Maker said.

Scott Lohah, the great-great-grandson of Peh-Tse-Moie, also addressed the crowd.

“I want to thank my mother, the oldest living descendant of Peh-Tse-Moie, Marilyn Hopper Dailey. She provided all of the information today,” Scott Lohah said. “He died before my mother was born, but her grandmother told her stories.”

“He was called Bob Peh-Tse-Moie, or Grandpa Bob. He was on the Tribal Council and his son-in-law was John Oberly, who was Chief,” Lohah said.

The city of Hominy was named after someone named Ha-Moie, but Lohah and his family were not sure if that referred to his grandfather since several people shared that name.

“There are relatives from the following families still living in the Hominy area: Oberly, Davis, Satepauhoodle, Abbott, Hopper, Dailey and Lohah. Peh-Tse-Moie also has many descendants living in various places all over the country,” Marilyn Hopper Dailey said.

“There’s nothing better in the world than children playing and laughing and having a good time. Grandpa Bob was advised that if he left this property for a park, then the children would play here forever and always have a place to play,” Lohah said.

“Speaking for myself and the descendants of Grandpa Bob Peh-Tse-Moie, we are very proud of what he did for this community,” Lohah said.

Lohah addressed the crowd in Osage: “zhi-kah^ zhi shka-dse sho-sho-weh,” which translates in English to: “the children would always have a place to play.”

Lohah concluded with this: “Thanks to all and to the kids. You’ll always have a place to play at Peh-Tse-Moie Park!”

After Lohah spoke, Congressman Maker offered a prayer and then 200 free Osage meatpies were handed out to hungry guests. The two caterers were Ah-Tha-Tse Catering, which means “we eat” in Osage and MaryGrace Dailey.

The city of Hominy’s tourism department sponsored the festival, which also featured a style show by the Bartlesville Indian Women’s Club, an intertribal-service club formed in 1937. The club provides scholarships to Native American students. Clothing from the following tribes were worn and explained by the ladies: Lenape (Delaware) regalia and traditional clothing of the Apache, Navajo, Cheyenne, and Cherokee tribes. The ladies also brought traditional items to share such as dolls made from blankets and the double-walled reed basket.

This article was originally published by the Bartlesville Examiner-Enterprise and is used with permission.