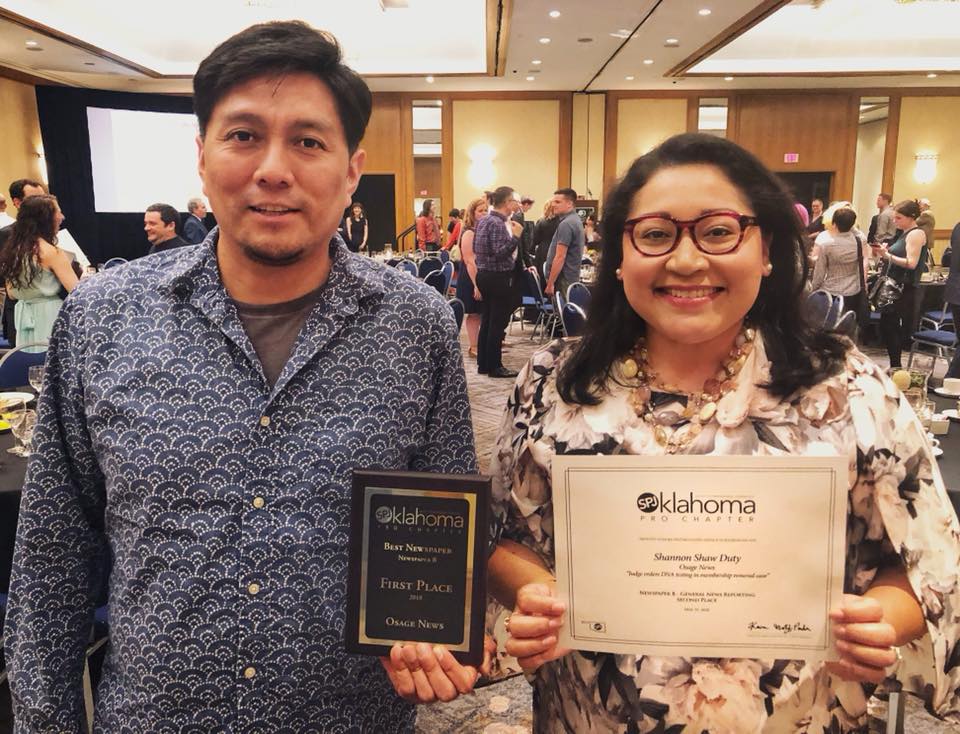 “This award is significant in that it recognizes and legitimizes tribal media as contributors to the News Industry in both local and tribal communities across Oklahoma,” said Osage News Editor Shannon Shaw Duty. “We are modern storytellers and hold dear the journalism ethics of fairness, accuracy and ethical reporting. Tribal communities have stories to tell and we are thankful to OKSPJ for recognizing our efforts.”

The Osage News won Best Newspaper in OKSPJ’s B category, which encompasses all newspapers with a circulation of less than 25,000. The Osage News is mailed to approximately 7,000 Osage Nation members and non-members and currently works with a staff of three and a devoted freelancer in Lenzy Krehbiel-Burton. The Osage News staff is made up of Shaw Duty, Senior Reporter Benny Polacca and Editorial Assistant/Photographer Chalene Toehay-Tartsah.

Second place went to the Tri-County Herald, which serves the Meeker, McLoud, Dale and North Rock Creek areas. Third place went to The Tulsa Voice, an alternative newspaper in Tulsa that comes out the first and third Wednesday of each month.

The OKSPJ hosts a yearly awards banquet that recognizes the best in Oklahoma journalism in the categories of Public Relations, Radio, Television, Online, Magazine, and Newspapers. This year’s banquet was hosted at the DoubleTree in Tulsa.

Attending the banquet for the Osage News was Shaw Duty and Polacca.

“Tonight we celebrate the achievements of Oklahoma’s finest journalists and the fact that good reporting should never be silenced,” said OKSPJ President Kevan Goff-Parker in his President’s letter to award winners.

Other Oklahoma newspapers that competed in the OKSPJ’s Best Newspaper B category are: