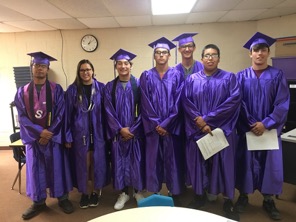 The director of ONED expressed her thoughts about the gifts and the work that went into creating and constructing them, “I just want these students to carry with them a reminder of how proud the Osage Nation is of their achievement in education,” said Mary Wildcat, ON Education director.

April 22, the Northern California Osage Association (NCOA) gathered together to view a video of Wahzhazhe Cultural Center Director, Addie Hudgins, as she facilitated the construction of the Osage necklaces.  Later that day, NCOA volunteers constructed the Osage necklaces as their heartfelt contribution to their Osage community, far away, in Oklahoma.

“Osage High School Senior Beading Project in Collaboration with Wahzhazhe Cultural Center” allowed Osages, far from Osage County, the opportunity to contribute and help make these cultural-signifiers extremely special and sentimental for these young Osage students that have demonstrated diligence and ambition for their futures!