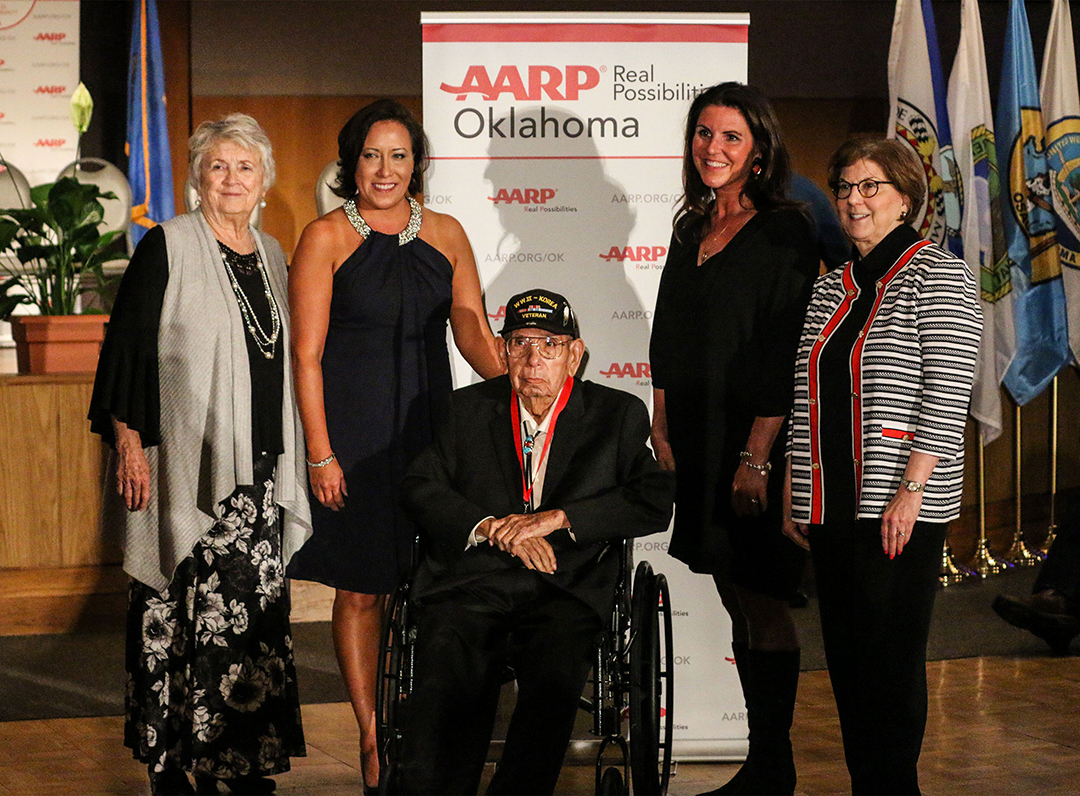 The event was hosted at the National Cowboy & Western Heritage Museum in Oklahoma City on Oct. 2. Shackelford and his family were unable to make the ceremony, but Luttrell’s family members accepted the medallion on his behalf.

Dr. Steven Pratt, Osage and the Head Committeeman for the Hominy District, gave the invocation in the Osage language. He has given the invocation for the past several years for the event and is a past honoree.

Fifty elders from Oklahoma’s 39 tribes were honored at this year’s ceremony, which included a buffet meal and medallion presentation for each elder. There were more than 800 attendees at this year’s event, one of the largest in the event’s 10-year history. It is the largest recognition program of its kind that honors Indian Elders for their contributions to their tribes, communities, state and nation.

The following is an excerpt from the program booklet which features a bio of each honoree:

Richard White Luttrell Sr.’s life embodies a journey of many dynamic facets. Born in 1926 in Hominy, Okla., Mr. Luttrell graduated high school from the Oklahoma Military Academy in 1943. Mr. Luttrell served in the U.S. Army for 12 years, both active and inactive, during World War II and the Korean War. After leaving military service, Mr. Luttrell later created Running RL Outfitters and managed both the business and the outfitting of the first commercial river rafting company on the Colorado River in Colorado. Running RL Outfitters encompassed big game hunting, camps for families, trail rides and other outdoor activities. Mr. Luttrell also served as a Boone and Crocket guide. During the off-season, he worked as a pipefitter and welder with Union 208 on missile bases, commercial and nuclear plants in Denver, Colo. Mr. Luttrell spent his personal time as a pack leader, committee member and associate with the Boy Scouts and scouted officially and unofficially for approximately 17 years in Denver. He was a member of the Denver chapter of the Knights of Columbus and was a Deputy Grand Knight, 3rd Degree. Mr. Luttrell had a moment on the national screen when he starred in a Super Bowl commercial for Schlitz Beer Company commercial, acting as a rider in a buffalo chase.

Mr. Luttrell has been a member of the Veterans of Foreign Wars, Kiwanis Club, American Legion and Oklahoma Fly Fisherman’s Club. Luttrell has received many awards and honors throughout his life, including an international award in Montreal, Canada, for conducting a camp for special needs children through the Industrial Kiwanis Club. He was inducted into the St. Maurice Infantry Organization as a member and honored by the Fairfax War Mothers. Mr. Luttrell has served on the boards of the Osage County Housing Authority, MESA Medical Company and Osage Veterans Memorial Commission. Mr. Luttrell was a key leader in the planning and execution of the building of a shrine in Pawhuska honoring St. Kateri Tekakwitha, the Roman Catholic Church’s first Native American saint.

Mr. Luttrell and his wife, Carmalita, have been married since 1947. They have four children and six grandchildren.

Romaine Shackelford’s life is a testament of a time filled with passion and dedication to the things he loves. Mr. Shackelford’s early life was spent in Graystone, where he was raised until the age of 10 by his grandfather. He attended Wyandotte Boarding School and Haskell Institute. During his time at Haskell, Mr. Shackelford was a lineman on its undefeated football team, and he subsequently became a proud Haskell alum where he forged many lifelong friendships.

Mr. Shackelford served his country during World War II and was stationed as an Army medic in Europe. He later married his wife, Ruth, and had six children. Mr. Shackelford worked for Phillips Petroleum for three decades and retired in 1985.

Mr. Shackelford began dancing in the In-Lon-Schka at an early age and continued for 70 years. He has served as an adviser for Drumkeepers and as a Whipman. Mr. Shackelford is a passionate and talented artist in painting and sculpting bronzes, and many of his pieces have been shown at renowned venues throughout the Midwest. Mr. Shackelford created the seal of the Osage Nation by request of Chief Paul Pitts during the 1950s. He is also well-known for beautiful Osage headdresses he makes for men. An avid reader, and historian at heart, especially when it came to Osages, Mr. Shackelford spent many hours visiting with the full blood elders. His taped recordings are a significant piece in adding validity and meaning to Osage history, culture, language and the In-Lon-Schka.