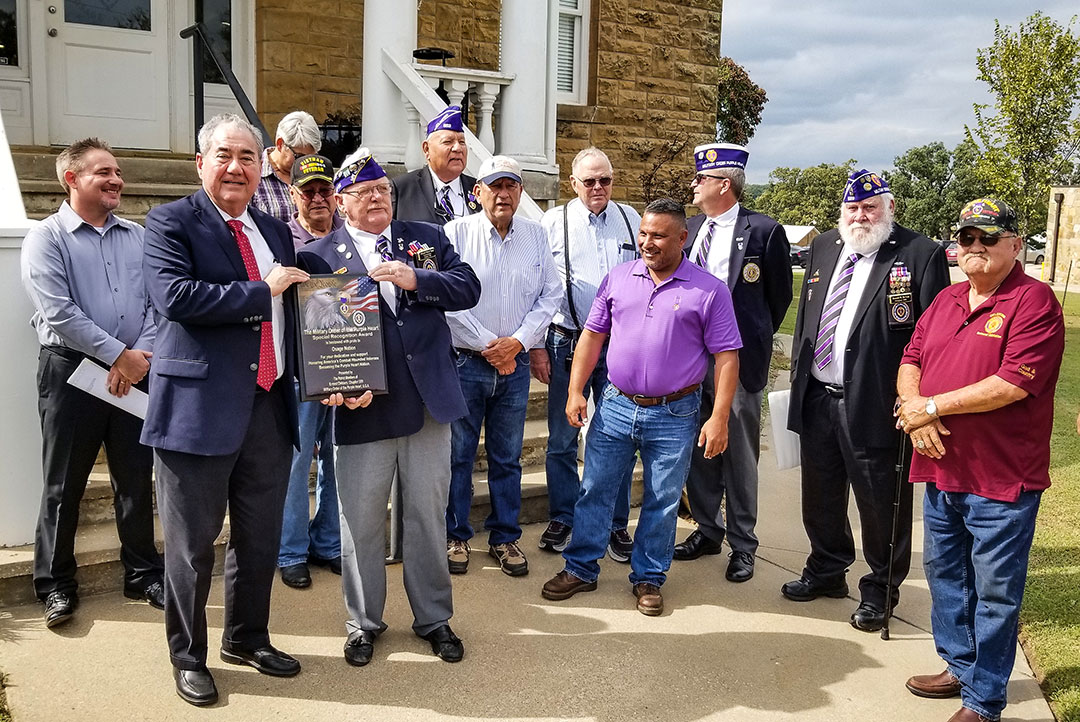 This year, the Osage Nation became the first tribe in Oklahoma to carry the title of Purple Heart Community after ON government leaders approved a resolution proclaiming the Nation is honoring military members who were wounded or died during combat action.

On Sept. 27, the Sixth Osage Nation Congress passed a resolution (ONCR 18-30 sponsored by Congresswoman and Army veteran Angela Pratt) to proclaim the Nation “as a Purple Heart Community, honoring the service and sacrifice of our nation’s men and women in uniform wounded or killed by the enemy while serving to protect the freedoms enjoyed by all Americans.”

The resolution also states Aug. 7 is designated as the day the Nation remembers and recognized veterans who are Purple Heart recipients, which is also designated annually as National Purple Heart Day.

According to The Military Order of the Purple Heart website: “The Purple Heart is awarded to members of the armed forces ... who are wounded by an instrument of war in the hands of the enemy and posthumously to the next of kin in the name of those who are killed in action or die of wounds received in action.”

On behalf of the Nation, Standing Bear accepted the plaque from the Military Order of the Purple Heart officials, adding: “I can tell you it is quite an experience to see the (Purple Heart flag raised in front of the building) go up just before you all arrived. We are extremely grateful for your service.”

“I’m very honored to be in your presence here today and I thank you for your service,” said Congressional Second Speaker Joe Tillman to Purple Heart organization officials and Osage veterans at the plaque presentation.

Marine veteran and Purple Heart Recipient John Henry Mashunkashey, who worked with the officials on the designation, said the Osage Nation is the first tribe in Oklahoma “to be a Purple Heart Community.” Mashunkashey also introduced other Osage veterans present including Casey Johnson, who is also a Purple Heart recipient and currently the Executive Branch Director of Operations.

“The Purple Heart is the military’s oldest medal and (President) George Washington presented the first medals in 1783. Today, there are approximately 600,000 living veterans that were wounded in combat and have received the medal,” Pratt said during the Congressional session. “I believe our Osage people and Native people, in general, have a great love and respect for our veterans and always have, even during the times that our country didn’t respect our veterans coming home. I’m glad that this is happening, and I hope that we continue to find ways to honor our veterans throughout our Nation.”