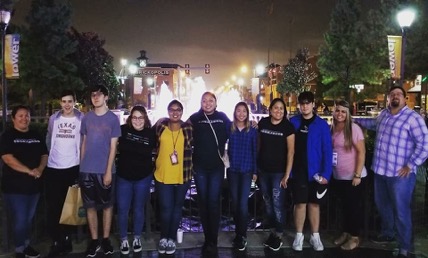 The Osage Nation Education Department promoted a 300-word essay contest for Osage students to compete and earn a trip to the American Indian Science and Engineering Society’s annual conference.

Eight students submitted an essay and answered the question, “How Do the Fields of Science and Engineering Impact the Osage Nation?” In reward, the winners attended the AISES Conference at the Cox Convention Center in Oklahoma City, Oct 3-6.

The participants were from the states of Oklahoma, Texas and Virginia. The attendees included Alaina Maker, Serdjan Rolovic, Luka Rolovic, Andrew Miller, Aliyah Wahwassuck, Mia Jones, Hailey Crow and Austin Kirk. In addition, two of the participants gave presentations during the conference. All of these students are committed to their fields of study and valued their experiences at the conference.

“I appreciate the tribe providing this great experience and it has motivated me to look for more opportunities to get involved with the Nation,” said Luka Rolovic, an 11th-grade high school student from Richmond, Texas.

Alaina Maker, the 2018-2019 Osage Nation Princess, presented a workshop that displayed culture and language preservation through STEM careers. She discussed identifying language needs in the community and how to address those needs by presenting information about Osage Nation’s language software app.

“My experience at the 2018 National AISES Conference was inspiring,” she said. “My favorite part was the college and career fair. Seeing a visible representation of the number of programs across the nation that cater to Native Americans pursuing STEM careers renewed my ambition to obtain a higher education degree.”

Austin Kirk, a Junior at Oklahoma State University, is majoring in Computer Engineering and minoring in Computer Science. The conference provided opportunities for Kirk to meet with companies such as Microsoft, Google, Facebook and Boeing. In addition, Kirk was offered internships with Intel and IBM. He summarized his experience saying, “Attending this conference has given me a great step forward in preparing for a career once I graduate college next year. All of this was possible only because of the generosity of the Osage Nation Education Department to allow me to attend.”

Pursuing Technological aims, Serdjan Rolovic, a Junior at the University of Texas, presented a workshop called “Utilization of Intel’s OpenVINO Computer Vision Toolkit.”  Rolovic received a scholarship from Intel. He has been offered an internship with IBM for Summer 2019.

During the conference, he received a first-place award for “Undergraduate Oral Presentation.” Afterward, he wrote a letter of appreciation, “I compiled my Intel work on facial recognition technology and machine learning into a PowerPoint presentation.

“It was a rewarding experience fielding questions and engaging the audience but most of all it was an honor. AISES has invested in me. Intel has invested in me. My tribe has invested in me. It was an honor to have the opportunity to represent all of those who believe in me,” he said. “At the awards luncheon, it was announced that I had won first place. It came with a monetary award, which I appreciated. However, what was most gratifying was being able to share this success with my brother (Luka Rolovic) and new Osage friends. I have the Osage Nation Education Department to thank for that.”