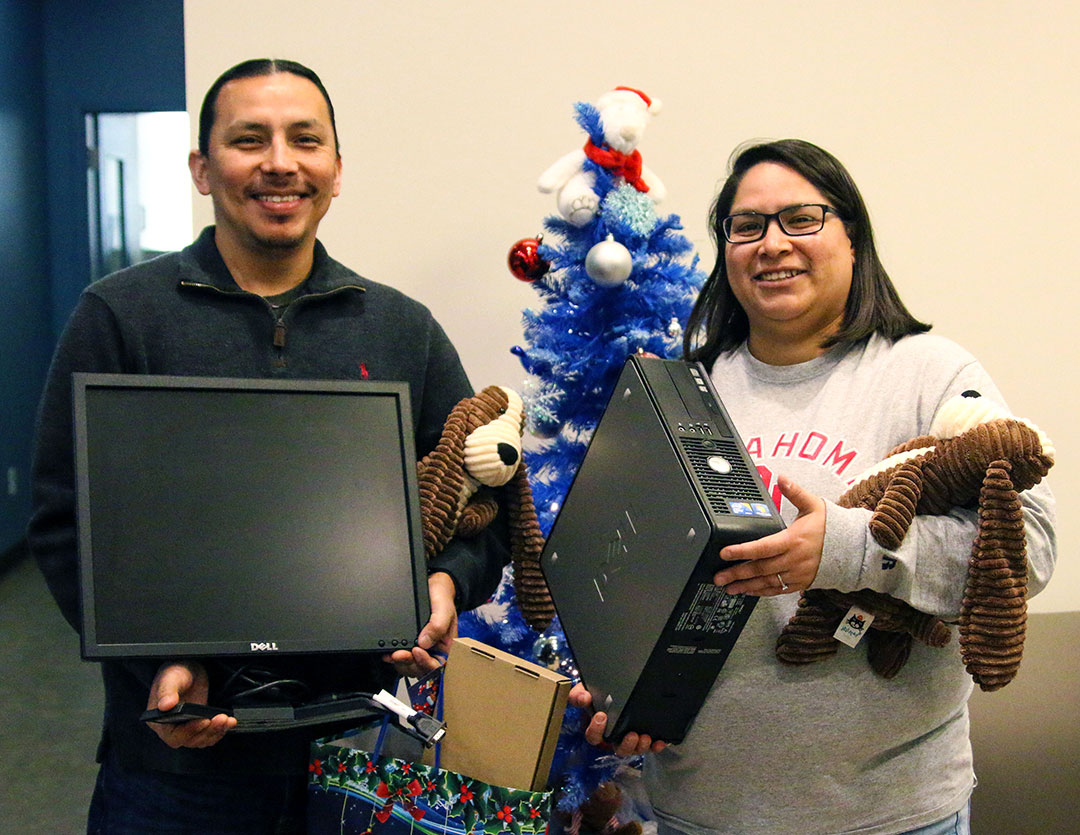 OJ and Caron Littlecook entered the Osage Nation Police Department the morning of Dec. 20 hand-in-hand. They were there to pick up a free refurbished Dell computer from the North Pole Computer Project which gives computers to families at Christmas. They were one of seven families to receive a computer this year from the ONPD.

The Littlecooks, who live in Skiatook with their five children and new puppy, were in good spirits despite the fact that their house, and everything inside, was destroyed by fire just six days before. The fire started in their 15-year-old son Cody’s room. The room is positioned in the middle of the four-bedroom home, on the back side of the house.

“I was expecting to see one burnt room, but no. Everything else was ruined,” Caron Littlecook said.

“There’s nothing left of Cody’s room, he lost everything. He lost all his dance clothes, everything.”

The Littlecooks were gone for the evening to a basketball tournament in Pawhuska. Their oldest daughter Olivia, 13, stayed home. The Littlecooks three other children are 19, 10 and 3 years old.

Olivia smelled smoke and the fire alarms went off, she looked down the hallway and saw the fire coming from the bedroom. She grabbed their puppy Diamond, ran outside and called 911.

The Skiatook Christmas Parade was going on at the same time and Miya McKim, who works dispatch at ONPD, remembers the parade coming to a halt as the fire trucks made their exit and raced toward the Littlecook’s house.

“We wondered what was going on because we had to get out of the streets to let the fire trucks pass by and we’re going, ‘Oh man, that’s not good,’” McKim said.

The first to arrive was the Skiatook Police Department, then a truck from Wildland Fire and then the Skiatook Fire Department. Littlecook said a Skiatook Police officer called her and said they had their daughter Olivia but did not elude to what the emergency was. She demanded to know what was happening and he told her there had been a fire.

They raced home and she began calling family and everyone they knew in Skiatook to go check on their house and daughter. When they arrived, the fire was put out, but the house was dark, no electricity, and they couldn’t determine the damage from looking at the house. They waited until firefighters said it was safe and they were escorted through the property. What they found inside was devastating.

“When we first went inside, it was shocking. They had flashlights and we were stepping on glass and stuff was everywhere, water had soaked the floor; soot and ash had made everything black. Our Christmas tree was drooping, melted, everything was covered in black,” OJ Littlecook said.

Emergency responders from the Red Cross were outside and gave each family member each a backpack with water and supplies. She was outside talking to the Red Cross workers when she saw her husband step inside their home.

“The whole hallway is just ... the heat, you can see that all the pictures melted, glass broke everywhere, started going through the kids’ bathroom and the whole closet and all that, ruined. In the kids’ rooms, in their closets, all their clothes just started melting,” he said.

Cody’s room, where the fire started, was charred and completely burned. His eyes teared up as he recalled the experience.

The official cause of the fire has yet to be determined, he said. They were told it may have been due to faulty wiring in an electrical socket that was next to their son’s bed. One of their older children noted that after they moved into the home, he noticed one of the electrical sockets in the house would spark from time to time. The fire was so severe, it began to melt their neighbor’s siding on their homes.

The only part of the house that wasn’t damaged was the garage.

The Osage Nation immediately gave assistance in the form of clothing vouchers and the family is staying at Osage Casinos until they find housing. She said their family and extended family returned to the house every day looking for anything they could salvage, but the smoke damage and soot seeped into everything they owned and ruined it, even into their kitchen cabinets and her dishes.

He said he and his wife kept telling everyone not to worry, they would be fine, but as time went on and they realized they didn’t have anything left, they knew it wasn’t going to be fine.

“Even when the Red Cross came to help, it was overwhelming because you think you’ll be alright and you don’t really think about what you’re going to need, right then at the moment.

“And when people ask you what you need, you don’t know what to say,” she said.

The community support they have received, not only from friends and family, but from various tribes such as the Quapaw, Otoe-Missouria, Miami, and Wyandotte has been overwhelming, he said. Organizers for dances in Perkins and Tonkawa had songs for the Littlecook family the weekend of the fire for donations for the family.

“That’s hard to take, we would probably feel the same way if someone was in our condition.

“I guess you never really know how people feel a lot of times and for people to come to help us the way they do is too much, it’s overwhelming,” he said.

“We’re grateful though. Last night we finally got to ourselves, finally got settled, we talked, went to our parents’ place.

“We prayed, burned cedar, we prayed for all of us, emotionally, psychologically, you know – because it started affecting the kids,” he said.

The kids went back to school, but as the days went on and the younger kids were crying for their home, they didn’t want to go to school. Their sons didn’t want to play in their basketball games at first but have recently begun to start playing again.

“I think they feel a little bit better now. We prayed, we talked, let them know even though all that stuff is gone, it can be replaced,” he said.

“The main thing is that everyone is okay. And, I explained to them, emotionally what we went through, we’re going to be okay and eventually, we will make a new home.”