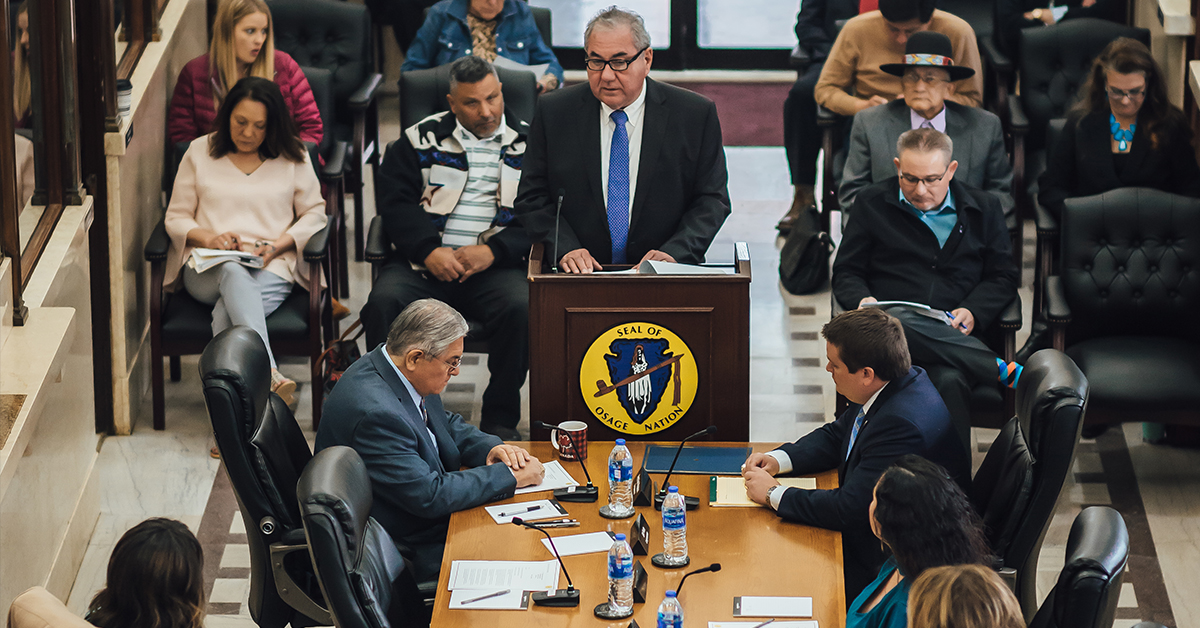 The 2019 Hun-Kah Session commenced with the Osage Nation’s State of the Nation delivered by Principal Chief Geoffrey Standing Bear.

“More people are enrolling, more services are being delivered, our communities are vibrant with the sound of our music and traditions, and the use of our language is growing stronger,” Standing Bear said. “We are dedicating our resources to the survival and strengthening of everything Osage. With the support of this Congress, our programs for Osage language, culture, immersion school and Wah-Zha-Zhe Early Learning Academy provide an Osage environment for our future.”

Standing Bear’s address comes as the Nation celebrated the 13th anniversary of the reformed Osage government this year. This is Standing Bear’s first State of the Nation address during his second term in office.

Regarding the Nation’s health benefit programs, Standing Bear said: “The growth in our membership has greatly increased the funding needs of the Health Benefit Fund. This fund, which provides for the health benefit card, the Medicare Plan F supplement program and the Medicare Part D program, has needed very large increases every year. Other programs have seen increases of funding needs, but none can match the high demand of the Health Benefit Fund.”

Other health benefit information Standing Bear shared included: “Over 1,400 Osages enrolled and received the Health Benefit Card for the first time and over 100 Osages signed up for the Plan F program” in 2018. The Executive (Branch) has reported to the Attorney General some suspected abuses of the Health Benefit Card where some people may have used the card for items not health-related. Those cases are being investigated and there already is discussion with the (Congressional) Health (and Social Services) Committee on this subject.”

“Each year we have limited resources to fund all the programs important to our people,” Standing Bear said. “This causes us to prioritize our requests for funding for our many programs. This year we are seeking an increase in funding of our Daposka Ankodapi (language immersion school), the Wah-Zha-Zhe Early Learning Center, and the Language Department.”

“We appreciate the support of this Congress for funding these programs. More and more, our Osage people gather in traditional events and perhaps most powerful of all is hearing our children speaking our language,” Standing Bear said. “This is only possible with the unswerving support of this Osage Nation government for every expression of being Osage. This expression is shown from building new dance grounds and community facilities, to language and culture classes, to new apps on mobile devices, to promotion of Osage art, education, food, dance, and music.”

On gaming, Standing Bear noted the growth in business thanks to the new Tulsa Osage Casino property, which opened last August. “Our (Gaming Enterprise Board), (Osage Casino) CEO, and casino staff have done a truly spectacular job of maintaining the quality of all of our gaming facilities throughout the Osage Nation while building our new beautiful Tulsa casino, hotel, and event center. During the past year in Tulsa, we went from no hotel rooms to now having 141 hotel rooms, 10 table games to 16, and from 989 gaming machines to now having 1,637 on the Tulsa casino gaming floor,” Standing Bear said.

Regarding future projects, Standing Bear said: “We can see many more possibilities for new realities coming from recognizing the needs of our people, the resources we have available and using our knowledge and experience to achieve attainable goals.  I believe these future projects include more housing for the elderly, a new health clinic, new buildings for our school, more development for our communities; working with local governments and companies to build a broadband network; and a strong veterans program. We know how to determine which projects may be out of our reach, and which projects are possible within the next five years or less. We have a team working on taking Skyway36 from a concept to a professionally-developed plan, to real projects involving parts of the aerospace industry to be located on our Osage lands in Tulsa.”

For more information on the Hun-Kah Session and filed bills and resolutions up for consideration, visit the Legislative Branch website at: https://www.osagenation-nsn.gov/who-we-are/legislative-branch