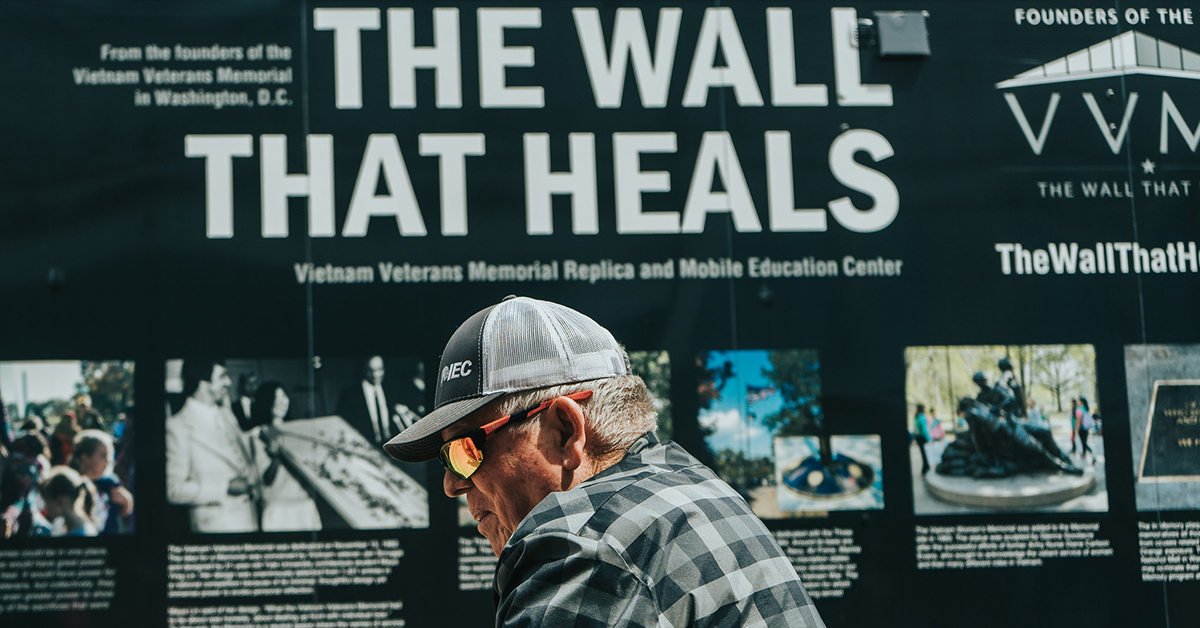 Osage veterans ride in motorcade for ‘The Wall That Heals’

Photo caption: The "Wall That Heals" is a replica of the Vietnam Veterans Memorial in Washington, D.C. The display is on both sides of a trailer. A motorcade of veterans accompanied the display through downtown Fairfax on April 16. CODY HAMMER/Osage News

A 375-foot-long traveling replica of the Vietnam Veterans Memorial passed through the Osage Nation as it made its way to a three-day stop at Oklahoma State University in Stillwater on April 16.

That afternoon, Osage and other local military veterans paid tribute along with fellow area residents as The Wall That Heals mobile exhibit made a stop in Fairfax accompanied by a motorcycle escort of patriot guardsmen and Oklahoma Highway Patrol troopers. Residents and veterans gathered along Main Street to view and take pictures and video of the traveling wall exhibit, which travels by a semi-truck trailer.

According to the Vietnam Veterans Memorial Fund, the nonprofit authorized by the U.S. Congress to build the national memorial in Washington, D.C. dedicated in 1982, the traveling version of the memorial “features a three-quarter scale replica of The Wall … The exterior sides of the trailer that carries The Wall That Heals open to become a mobile Education Center. Information cases display photos of service members whose names are found on The Wall, along with items representative of those left at The Wall in D.C. Since it was unveiled in 1996, it has visited more than 400 communities throughout the nation, spreading the Memorial's healing legacy to millions.”

There are more than 58,000 names of military service members who died during the Vietnam War and their names are inscribed on the Memorial.

According to an OSU news release, there are 987 Oklahomans’ names on The Wall That Heals citing National Archives data. Stillwater was the eighth of 34 stops for the traveling exhibit in 2019, which honors the more than 3 million Americans who served during the Vietnam War.

To learn about the Osage Veterans Memorial Commission, visit: https://www.osagenation-nsn.gov/who-we-are/veterans-memorial-commission

For more information on 2019 The Wall That Heals tour schedule, visit: http://www.vvmf.org/2019-twth-tour