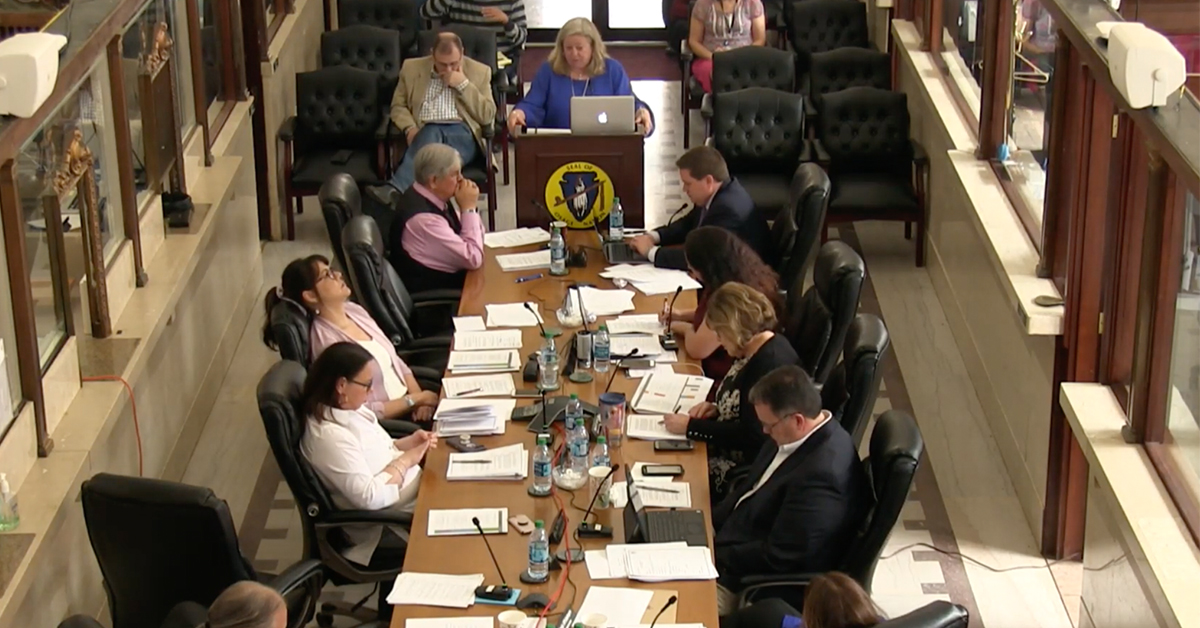 An Osage Nation Congressional bill seeking to establish a fund for home loan and down payment assistance for first-time home buyers to all enrolled Osages living within the 50 states and U.S. territories failed during the 2019 Hun-Kah Session.

Congress members debated and discussed the bill (ONCA 19-12 sponsored by Congresswoman Shannon Edwards) during committee meetings before voting it down on April 17 with three “yes” votes and eight voting “no.”

The bill sought to expand the current down payment assistance program offered through the Nation’s Housing Program. The current down payment assistance program is open to first-time home buyers (who are income-qualifying Osages planning to reside in Osage County) with that housing assistance coming from federal funds awarded to the Nation. The Housing Program also uses tribal funds to assist enrolled Osages living in the state of Oklahoma who do not qualify for federal housing assistance.

ONCA 19-12 prompted Congressional member discussion on several concerns including questions of whether the proposed expansion to the home loan program would be feasible, whether the program could be subject to fraudulent misuse especially outside of Oklahoma and concerns that other needs of the Nation are not being addressed properly including more senior housing opportunities.

In discussing the bill, Edwards referred to a 2005 memo from the National Indian Gaming Commission, which discussed the use of net gaming revenue (made at tribally-owned casinos) for the general welfare of the tribe and its members. She said the memo states: “When tribes establish government programs to benefit individual members, those programs should: 1) Be created in response to a recognized need within the Tribe; 2) Have eligibility criteria to determine which members qualify to participate; and 3) Not discriminate by including some members and excluding others without reasonable justification.”

In a prepared statement on the bill, Edwards said: “The Osage Housing Department has been administering federal home loan and down payment assistance for some time. The Federal Department of Housing and Urban Development (HUD) publishes Rules and Regulations governing the criteria for Native Americans and Osage members to receive federal assistance. At some point, the Executive Branch requested and the Osage Congress agreed to set aside tribal gaming revenue for down payment assistance to Osage first-time homebuyers who did not qualify for federal assistance. There are no Osage Nation rules and regulations governing how those funds may be accessed, however there are Executive-approved policies and procedures which limit use of the funds to members residing in the State of Oklahoma.”

During the Hun-Kah Session, ON Housing Program officials told the Congressional Government Operations committee the budgeted tribal funds to assist Osages (who do not qualify for assistance coming from federal money) is depleted for the remainder of the 2019 fiscal year.

Although ONCA 19-12 does not seek tribal funds at this time to fund the proposed expanded program, Edwards said: “This bill provides for a fund to appropriate dollars for home loan and down payment assistance to all qualifying Osage member first-time homebuyers regardless of the location of the residence as set forth in Osage law and rules and regulations governing expenditure from the fund. The bill specifically provides that all Osages within the 50 states and Puerto Rico are eligible to apply for home loan and down payment assistance to purchase their first home. The Osage Nation proudly provides over $10 million dollars annually to all Osages in the form of health benefits. It also has other direct assistance benefits as well. This benefit continues in the spirit of serving all Osage members with gaming revenue that furthers the general welfare of tribal members.”

Also during debate time, Other Congress members voiced their support or concerns regarding the bill before the final vote.

Congresswoman Alice Goodfox noted the Nation provides other assistance to Osages across the country including scholarships, which prepare students for the workforce after graduation. She also believes one area the Nation is failing is lack of senior housing opportunities in Osage County, which need attention too. “The one question I get asked repeatedly (while traveling and visiting Osages in various states) is ‘when are you guys going to take it seriously and start appropriating dollars and get a fund for senior housing?’ ... I also think that we are doing our part in providing scholarship money to help individuals get better jobs to make more money… While I don’t disagree it’s a good thing to help people with their down payment, we’re also talking about people that are probably in their 20s, 30s, 40s – they’re able to work, provide for themselves more so than elders.”

Goodfox said she contacted the Executive Branch to ask how many Osage elders are on the senior housing waiting list and she was told 30 people and she was also told the current senior housing complex in Pawhuska was built in the early 2000s before the current reformed government launched. “Since the start of this new government, we have not built any senior housing with all of those millions and millions of dollars of gaming revenue, we have not taken care of our elders and I think we need to change that – and not just this body, I think the legislative and executive branches need to make it a priority.”

Congresswoman Paula Stabler said she would love to support bill, but could not, stating: “It wouldn’t be financially responsible for us to extend on something like this when we do have a lot of other needs that I feel have as much a priority, if not more and I’m talking about the elderly… I’m thinking more of assisted-living and nursing homes. We have a huge, huge population advancing every day beyond retirement age and there’s nothing really here for them except … apartments that we have aren’t assisted-living apartments … I hope we get to a financial state where we can come up with all kinds of programs beyond this even, right now we struggle with ‘the big three’ (scholarships, health benefit and burial assistance).”

Congressman Eli Potts said he supported the bill because the current assistance program doesn’t apply to Osages living outside of Oklahoma, noting he believed the Congress took an oath to serve all Osages. “We already serve first-time home buyers; it’s making this program applicable to all Osages regardless of where they live … And I agree we need to do more to serve our elders, happy to work with anybody on that topic, but just because we should serve our elders shouldn’t prevent us from serving all Osages.”

Congresswoman Maria Whitehorn also supported the bill and agreed the Nation should provide more senior housing for Osages, but added: “To me, these are two separate issues. I don’t view this as something that’s going to be expanded to the point of scholarships, health benefit … What this legislation does is it allows for people that live outside of the boundaries (of Oklahoma) to be considered for those limited amount of funds that are there.”

Congresswoman Angela Pratt said the Executive Branch, including housing staff, had serious concerns of how the expanded assistance would be administered with out-of-state applicants and stated she believed the program costs would increase.

Congresswoman Brandy Lemon noted the fund established in ONCA 19-12 would someday need an appropriation of tribal funding and she cannot support the bill today. Lemon said she was happy to hear Congress members say they would like to support housing needs for elders, which she regards as “one of our most valuable assets.” Lemon said there is already a lot of money going to the “big three” direct services and believes “it is past time to take care of our elders.”

“(The housing staff) expressed some administrative issues that they felt they would be burdened with and I tended to agree. I also felt like there were some potential remedies that were reasonable that were expressed by (Edwards), but the issues are how do we go do an on-site (house) inspection? And if it’s 500 miles away, it’s not reasonable for somebody to drive there physically or hop on an airplane to go do a visual inspection,” Walker said. “I do agree that (other professionals) could be sent, but still, I think this opens up a little bit too much of an opportunity for fraudulent behavior when you get with out-of-state contractors and mortgage individuals who are trying to sell a house.”

In closing, Edwards said she had confidence in the housing staff to administer the expanded assistance program and believed it’s wrong to prohibit or discriminate against Osages who live outside the program service boundaries.