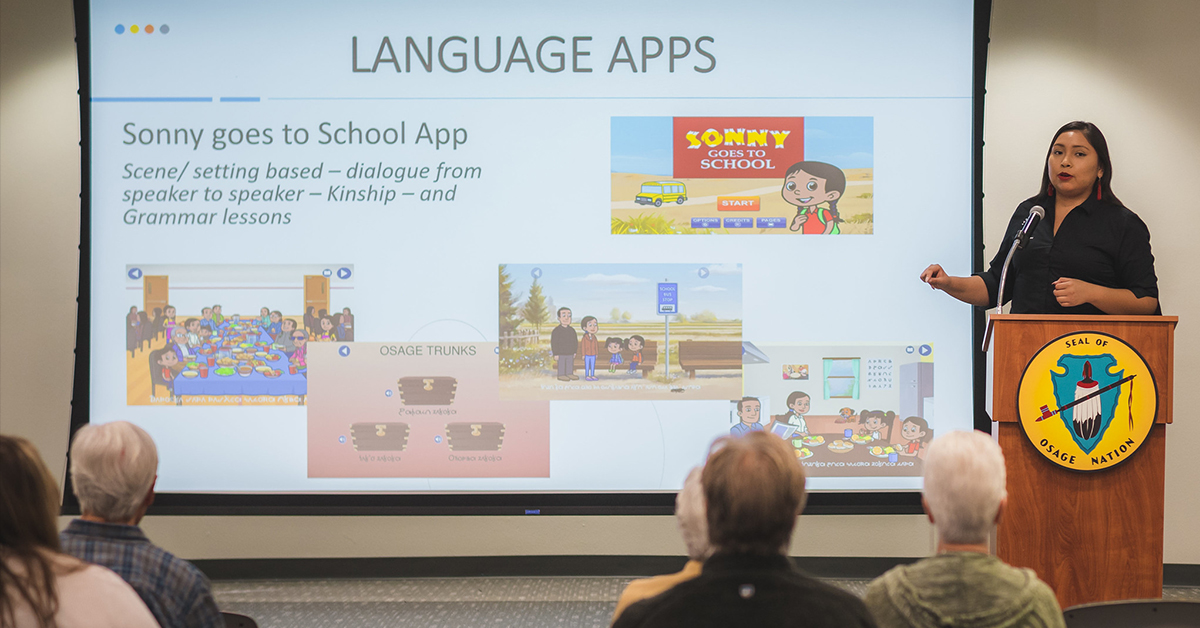 CARLSBAD, Calif. – A clear sunny day near the Pacific Ocean provided the landscape for the United Osages of Southern California spring gathering held here for the region’s Osages to enjoy the camaraderie and updates from the Osage Nation.

Approximately 90 attendees came to the Carlsbad Senior Center to enjoy the UOSC gathering on May 4 featuring fellowship, lunch and presentations from Osage Nation government and culture officials visiting from Oklahoma.

Principal Chief Geoffrey Standing Bear delivered a small State of the Nation address noting 21,774 Osage members are enrolled, which is “a 21 percent growth rate in the last five years.” He also noted enrollment in the Nation’s health benefit program is also up with 2,200 new members signing up this year.

“As you can see, we are growing in a lot of different ways and we have very good people working for us,” Standing Bear said before announcing recent hires now working for the Nation, which includes out-of-state Osages moving to Oklahoma.

Standing Bear said the Nation employs approximately 500 employees, which has remained the same for the last five years. “What we’re doing is trying to find those people who really feel like they’re on a mission, want to do the work … and we do have Osage preference (in hiring)” with the last seven hires (all Osage) in key positions, he said.

For example, Standing Bear noted a former San Diego area Osage is now working as the operations manager for the Information Technologies (IT) Department. William (Revard) Fenton is a 30-year Navy veteran who served as a Chief Petty Officer who responded to the ON job advertisement call, Standing Bear said.

Standing Bear said Dante Halleck moved from New Mexico to assume the newly formed Managed Assets Director post, which is in charge of the Nation’s Tribal Works, Tribal Development, Real Estate Services and Land Acquisitions Departments. Halleck, an Air Force veteran and artist, also holds a master’s degree from Jackson State University in Emergency Management with an emphasis in Tribal Risk Mitigation, Tribal Sovereignty and Self-Determination, according to an ON email announcing Halleck’s hiring in April.

Also from New Mexico, Marla Redcorn-Miller is now director of the ON Museum, Standing Bear said. “She’s Dartmouth (College)-educated, Columbia (University) in New York and worked in the Santa Fe museum world and she’s taken the position and now heads our Osage museum,” he said.

Standing Bear noted a new Assistant Attorney General is now working in the AG’s office. Jeremiah Ross joined the AG’s office in April where his duties include prosecuting cases, contract review, title research, environmental and water rights issues. Ross holds a bachelor’s degree from the University of Oklahoma and received his Juris Doctorate from Gonzaga University, according to his LinkedIn page.

“As these key positions are opening up, we are finding that people want to come back if they had the opportunity, if there’s a place they can stay and connect with what we’re trying to do back home,” Standing Bear said.

Also in his updates, Standing Bear noted the Nation continues to receive most of its revenue from gaming at the seven Osage Casinos with Tulsa’s new hotel/ casino/ event center location as the largest and biggest revenue generator. “We’re also planning another hotel tower for another 140-150 rooms in the next year, we went from 10 table games to 16 table games and 900 gaming machines to 1,637,” Standing Bear said, noting the Nation is in a competitive market with a total of 39 federally recognized tribes in Oklahoma.

Jason Zaun, Chief of Staff for the Executive Branch, noted there is now a requirement for annual re-enrollment in the Health Benefit program due to a change in Osage law. He said a request for proposals (RFP) is now out for a third-party administrator to manage the health benefit accounts. The deadline for RFPs is June 17, according to the Nation’s procurement requests listed online. Once the administrator is selected, applications and online enrollment will be available later this year, Zaun said.

Potts briefly discussed several bills he sponsored, which passed during the 2019 Hun-Kah Session including the Budget Control Act (ONCA 19-40), which was one of the objectives he campaigned on. “It was the No. 1 priority for the Speaker of our Congress (RJ Walker at the time), it was the No. 1 priority for the Executive Branch … For the first time, I feel we have strong budgetary language in place in Osage law that creates a process that is open and transparent,” Potts said in thanking everyone for the efforts to pass the bill that is a work in progress. Potts also noted he plans to hold more town hall-style events to meet with the public including Facebook to connect with Osages near and far.

Whitehorn said the Hun-Kah Session did not include many appropriation bills and there is roughly $200,000 remaining in the general fund for the rest of the 2019 fiscal year. Whitehorn, who previously served as Congressional Appropriations Chair, said there is about $459,000 in the retained revenue fund, which is remaining unspent money realized after the annual audits and there is no funding in the economic development fund, which was appropriated during the 2018 Tzi-Zho Session.

Also during the session, Whitehorn noted she sponsored an amendment to Osage law (ONCA 19-23) establishing a three-member investment committee with the Nation’s Treasurer and the Executive Branch and Congress each appointing one individual to serve on the committee tasked with implementing a financial management plan and investment strategy for the Nation. “Congress needs a representative on the investment oversight committee, please send me an email, send Eli Potts (now chair of the Congressional Appropriations Committee) an email because we need to appoint somebody that has the expertise in the area of investment,” Whitehorn told the attendees.

Tillman shared a moment he had during the visit while having a telephone conversation with his father former Principal Chief Charles Tillman, who relayed the message to the UOSC attendees “hello” and he’s “praying for you” and recalled past visits to California while he was Chief. In a quip to his son, the elder Tillman said the former tribal government operated on about $400,000 and “now you guys get $50 million and you still can’t run it,” prompting laughs from the audience.

Addie Hudgins, director of the WahZhaZhe Cultural Center and ON Visitors Center discussed those two entities’ services including WCC classes to make Osage dance clothing (roaches, fingerweaving, brooches, shirts, ribbonwork, etc.). Other recent offerings included Facebook live streams of those class activities for viewers to ask questions, she said. An ongoing WCC project is digitizing archived content including video and audio recordings that would be available online for future use.

For the Visitors Center, Hudgins said its purpose is to provide an information outlet to accurately discuss the Nation “where we tell our story from our perspective from our view – the good, the bad and the ugly – the truth and how we want ourselves to be portrayed,” Hudgins said. The other service provided is a boutique for Osage artists to sell their work (moccasins, jewelry, paintings, custom-print gift items, etc.) on a consignment basis on a 75/25 split on the sales made with 25% going to the Nation, Hudgins said, adding the intent is to promote Osage artists and businesses in town.

Also at the event, language instructor Alaina Maker delivered a presentation on the language, which included a lesson on different ways people greet each other using the Osage language. Standing Bear also noted for the attendees that Maker is the outgoing Osage Nation Princess who was crowned in 2018.

UOSC Chairman Greg Clavier said approximately 60 attendees and their families are among the 90 participants that day with several offering great feedback to him afterward. Like in past UOSC gatherings, a 50/50 and opportunity drawing was held for gift items donated by the attendees. Clavier said a total of $510 was raised from the fundraisers with the proceeds to go toward the event’s costs including organization supplies and “hopefully soon we will be able to purchase a drum for the UOSC.”

Clavier told the attendees the next UOSC event will be the 2019 Fall Gathering scheduled for Nov. 2.