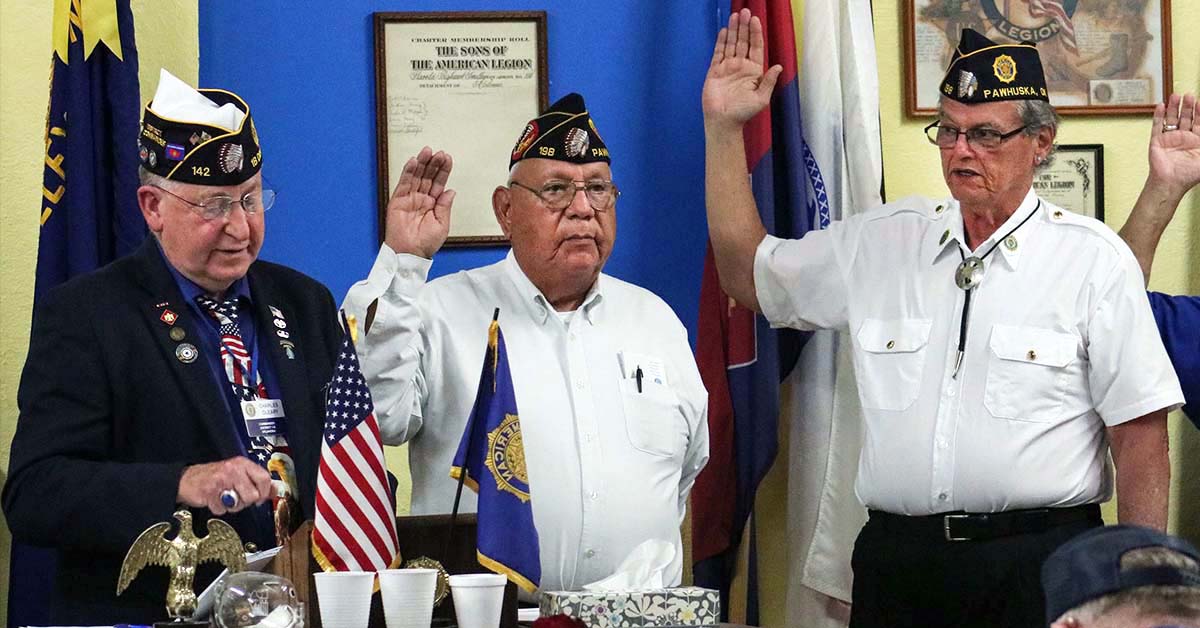 Both men were elected by the Post 198 membership and were sworn in on April 22 at the American Legion Hall in Pawhuska.

This is the second time Mashunkashey will serve as commander, and this is a first for Trumbly to serve as vice commander.

Mashunkashey joined the Marines after high school, enlisting in 1965. He served until 1969 until he was honorably discharged as a Corporal E4. He also served as a Marine Rifleman. He was wounded in 1968 at the Battle of Khe Sanh where he served in the First I Corps. He was shot twice and survived a napalm explosion where he suffered severe burns, injuries and brain trauma. He spent a year-and-a-half in an Illinois military hospital and went through extensive physical therapy to use his legs to walk.

While serving Post 198, he has helped with the Grayhorse War Mothers, Hominy War Mothers and the Ladies Auxiliary Unit of the American Legion Post 198.

The Department of Oklahoma Marine Corps League of the southern division, which encompasses Texas, Arkansas and Oklahoma, selected him as the 2015 Marine of the Year.

Trumbly, Osage, served in the Vietnam War as a Crypto Repairman. He repaired all coding and decoding equipment. After the war he spent several years in the oil business. He holds a doctorate in Information Systems and Quantitative analysis (statistics). He attended the University of Oklahoma for his bachelor’s in business administration, and Texas A&M for a master’s in business computing sciences. His doctorate is from Mississippi State University.

He has been on the faculty of the University of Oklahoma, University of Texas at El Paso, and currently an adjunct faculty member at UCCS. He has been working in the IT / Technology field since 1980.

He is currently teaching for Pawnee Nation College and working on projects for the Osage Nation. He is an NRA Certified Instructor for Rifle, Pistol, Shotgun and Muzzleloading. He is an Eagle Scout, a Vigil Order Member of the Order of the Arrow and has worked with Scouts for over 10 years as an Adult Volunteer.