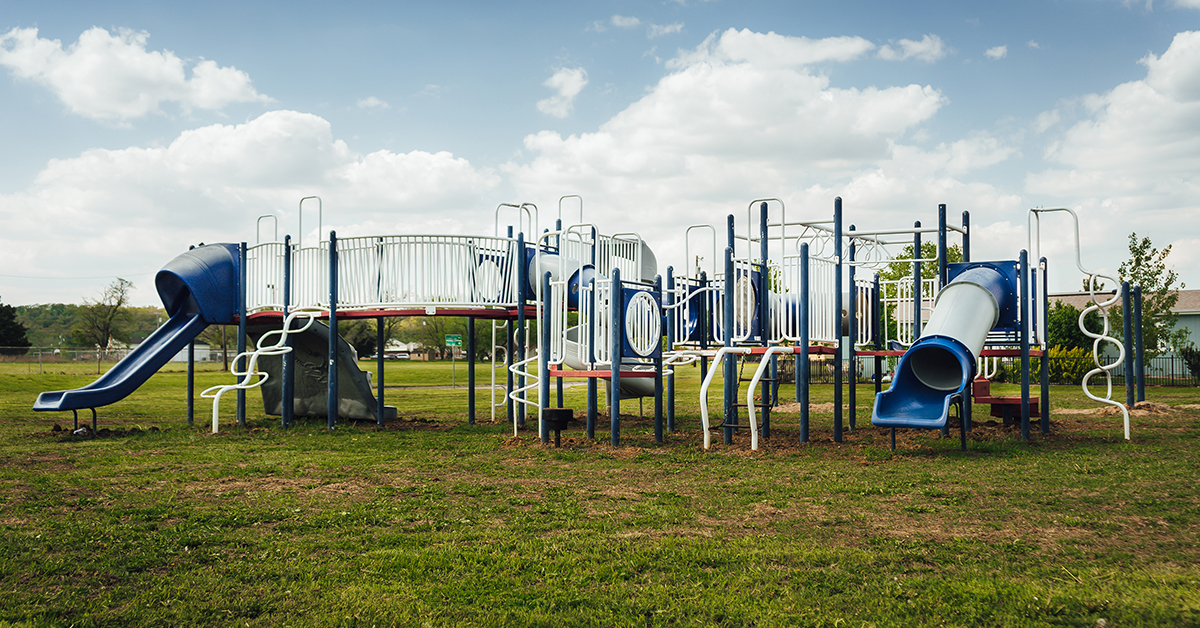 Wakon Iron Park in the Pawhuska Indian Village now has its two playground sets installed at the site west of the community building.

“Wakon Iron Park is part of an overall effort to improve the physical appearance of the village, strengthen the community, and make the Pawhuska Indian Village a more attractive place to live and enhance the quality of life,” according to a news release by the Village Committee, which spearheaded the efforts to revitalize the park with other residents.

Village Committee member Fawn Cheshewalla said a contractor dug several-feet-deep holes in the ground for installing the playground equipment and those structures were anchored down with poured concrete. She also noted the committee is considering ideas for adding extra features for the park including trees and benches.

The committee is also working in partnership with Osage Nation Roads Department to install nine paved parking spaces at the park’s location, which is the corner of Wakon Iron Boulevard and Thunder Fear, the release stated. The Village Committee is looking at other areas of the village to improve, which includes a possible future basketball court and bleachers.

Marjorie Williams, village committee chairwoman, said: "We really took into consideration all the age groups and everyone having fun, while feeling safe."

Currently serving on the Pawhuska village committee are Williams, Cheshewalla, Patrick Luey, Kathryn Redcorn and Teresa Tinker Schutz, who joined the committee after Stabler resigned to take office after she was elected to the Sixth ON Congress in 2018.

The Village Committee also hired Regina “Ustee” Grass as its project manager, which is a contracted position she’s held for more than 15 months. Grass (Cherokee Nation), who holds a master of public health degree, helps with business and daily operations of the committee to continue pursuing its improvement projects, which includes grant writing.

"A key benefit of Wakon Iron Park is physical activity – there is strong evidence showing when people have access to parks, they are more likely to be regularly physically active, so this is a part of a broader effort called Indian CAMP (Creative and Mindful Play)," Grass said in the release.

Another village improvement project underway during May is at Ed Red Eagle Park, which sits along the village’s eastern boundary along U.S. 60. The Village Committee purchased black park benches with “Pawhuska Indian Village” inscribed on them, which are to be set at Red Eagle Park.

During the April 15 meeting, Stabler said she had filed a bill (ONCA 19-39) seeking a $250,000 appropriation to pay for the architecture and engineering costs to build a new Wakon Iron Community Building. Citing low tribal funds available for the remaining 2019 fiscal year, Stabler told the attendees ONCA 19-39 was not expected to pass during the 2019 Hun-Kah Session, which was ongoing at the time.

According to the bill, the requested $250,000 is to be appropriated to the Nation’s capital asset and improvement fund for architectural and engineering costs for a new multi-purpose community building. The 2019 Hun-Kah Session ended April 23 with no further consideration but may be revisited at a later date or when the Congress meets for the Tzi-Zho Session in September to pass budgets for the 2020 fiscal year starting Oct. 1.

For more information on the Pawhuska village, visit its website at www.pawhuskaindianvillage.com