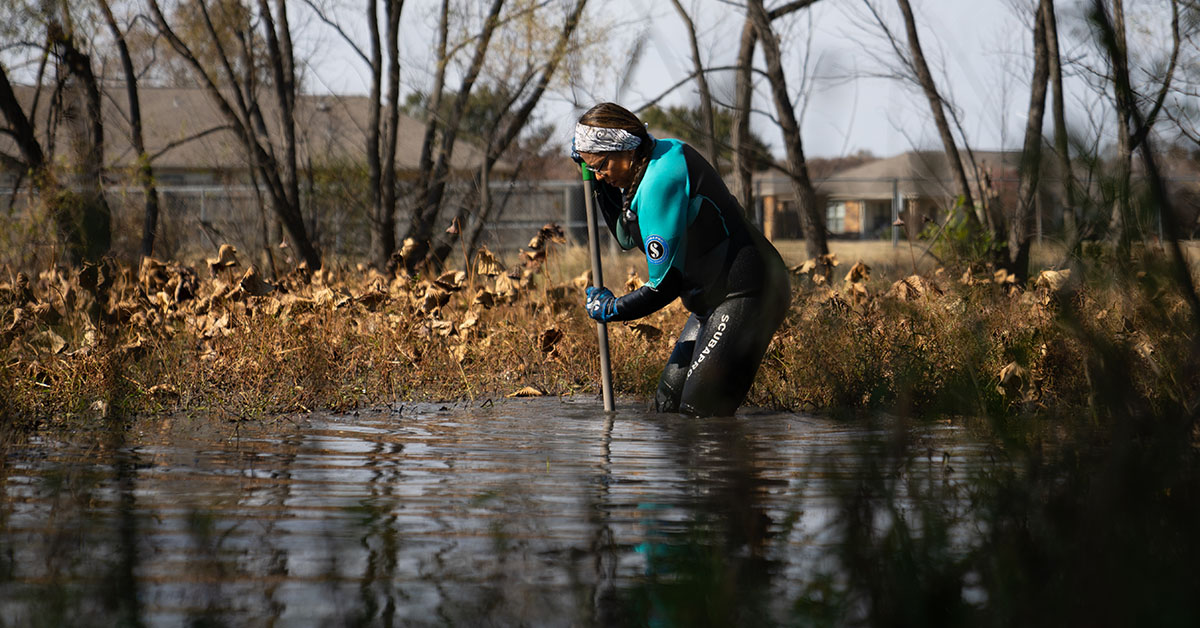 Harvesting lily pad root may not be thing of the past

Photo caption: Margaret Sisk harvests lily pad root, or yonka pins, in the Osage Nation Campus ponds in Pawhuska on Nov. 4. She plans to make the harvest a yearly activity and encourages other Osages to join her. CODY HAMMER/Osage News

On a cold, crisp November morning, Margaret Sisk, a master gardener who works at Bird Creek Farms, put on a scuba suit and waded into the waters of the Nation’s Campus ponds. She was digging for lily pad root, also known as yonka pins.

The Osage count yonka pins as part of their traditional diet, thinly slicing the root and cooking them with pork in a soup. It is a treat during Inlonshka when the committee cooks make a good pot of yonka pins.

What used to be an annual harvest for Osages in the early-to-mid 1900s, the practice has all but died out, but Sisk wanted to give it a try.

“I’ve never picked yonka pins before, but I’ve spoken to many people who watched their ancestors do it. We have so many lily pads on our campus ponds, I thought why not? They were just going to kill them anyway, might as well harvest them and see if we can cook them,” she said.

The roots she managed to dig up were small, but it was only her first time and she is not discouraged from trying again and making it a yearly harvest.

From her research, the best time to pick them is in November, after the first freeze has most likely killed off any snakes that may be in the ponds. Bull snakes and water moccasins (which are poisonous) have been spotted on campus in the past.

People wishing to help need to purchase waders so they can wade into the cold, muddy water. The work is also strenuous, so keep that in mind, she said.

“I would love for Osages to come out and help. This is why I do my job, to get back to our traditional ways of living and eating. Every little bit helps,” she said.