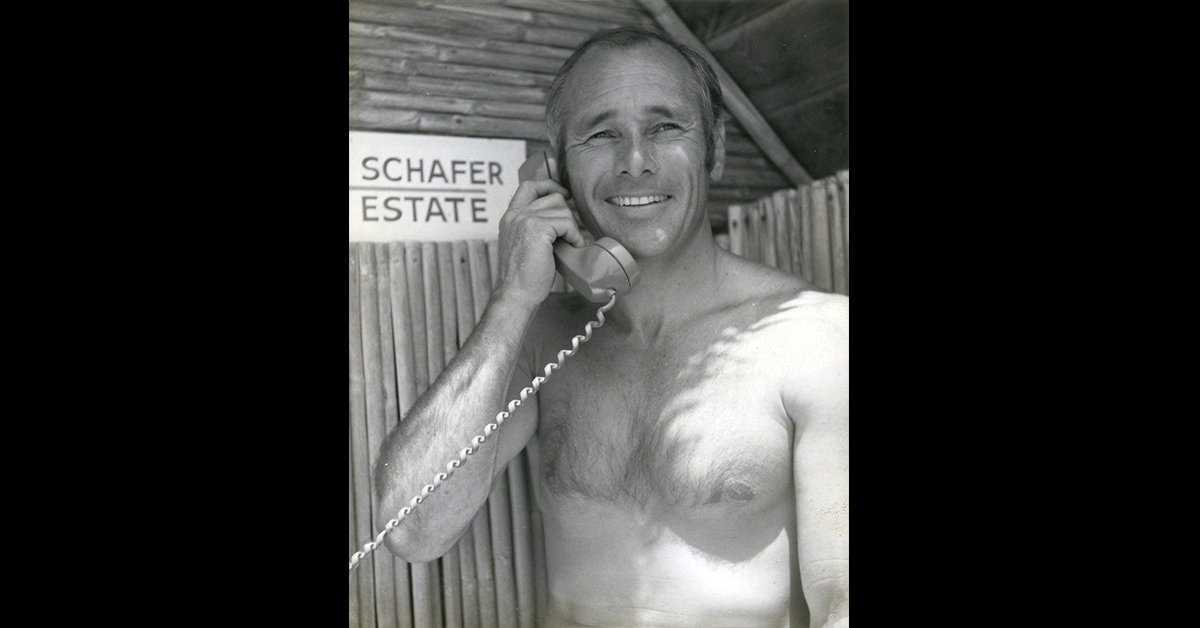 Wayne Penn Schafer, born January 31, 1929, in Long Beach, CA, to Betty and Wayne Marston Penn, died at home June 2 after a brief illness, not related to Covid-19. Wayne, whose Osage Native American father passed away early in the Great Depression, was raised in Toluca Lake, CA, by his mother and her second husband, Hollywood photographer A.L. (Whitey) Schafer. It was there that Wayne met his lifelong best friend, Peter H. Dailey. An all-star high school athlete and accomplished musician, Wayne went on to USC, graduating in Music Theory while also presiding as president of the Kappa Alpha (KA) fraternity and serving in the U.S. Naval Air Reserve.

With his mother widowed for the second time in the early 1950s, they moved to Capistrano Beach, CA. There Wayne created a lifestyle of the quintessential Southern California sportsman and businessman, developing Dana Point real estate, surfing off his front yard on the famed Poche reefs, photographing ski events around the world with his great friend Dick Barrymore (including the 1968 Olympics in France), and helping his friend and neighbor Hobie Alter develop the Hobie Cat sailboats at his beachfront home. Wayne gave tutorials to introduce the Hobie Cat to throngs of sailors around the world, and his Wednesdays at Wayne's après-sail barbecues at Capistrano Beach attracted sailors from all continents. His legendary sailing skills (he always found the wind), integrity, and warm manner helped propel the Hobie Cat to worldwide fame, while forging personal, lasting friendships spanning multiple generations.

Wayne was also one of a quartet of Southern Californians who established a base in Moorea, Tahiti, that evolved into the world-famous Bali Hai resort. His other real estate interests included property at Zacatitos on the East Cape of Baja, Mexico, his Osage father’s original mountain cabin in Idyllwild, CA, and property in the Osage Nation Oklahoma, where he maintained his headrights.

Wayne was active in both the Capistrano Beach Road Association and the Capistrano Bay District, holding the title of president of both organizations over his 67 years in residence. In addition, he opened his unique Tahitian-inspired beach property every year for the homeowner’s association’s summer luau.

Over the years, Wayne’s home and beachfront became a metaphor for his generous personality as he hosted friends both locally and globally for stay-overs that could last a weekend … or years.

Wayne is survived by his son, Wayne Marston Penn Jr., daughter-in-law Aileen Briceno Penn, and granddaughter Sofia Elise Penn of Newport Beach, CA. Other members of his close ohana family include the Dailey kids—Michael Ann Ewing, Sydney Dailey, Peter Dailey Jr., Biz Dailey and Paddy Dailey Hayes—and their children; the wonderful Lisa (Clark) Larmand, who helped him so much with his business and his life; Lori and Harvey Roberts and family, whose relationship to Wayne dates back to times in Tahiti; beloved companion Lindsay Steenblock and longtime friend Lana Berg; fraternity brother John Hogan, his wife, Emeline, and their family, of Moorea; and neighbor and soulmate Walter Hoffman and family. It’s been accurately said by longtime observers of the Schafer-Poche beach scene that Wayne was loved by a lot of people. No one deserved that love more.

Due to the current world situation, a memorial paddle-out will be scheduled in early August. Please visit and follow the Surfing Heritage & Culture Center (shacc.org) for updates and details.

In lieu of flowers, Wayne's family and friends ask that donations be made to the Wayne Penn Schafer Memorial Fund at the Surfing Heritage & Culture Center (shacc.org), 110 Calle Iglesia, San Clemente, California, 92672.