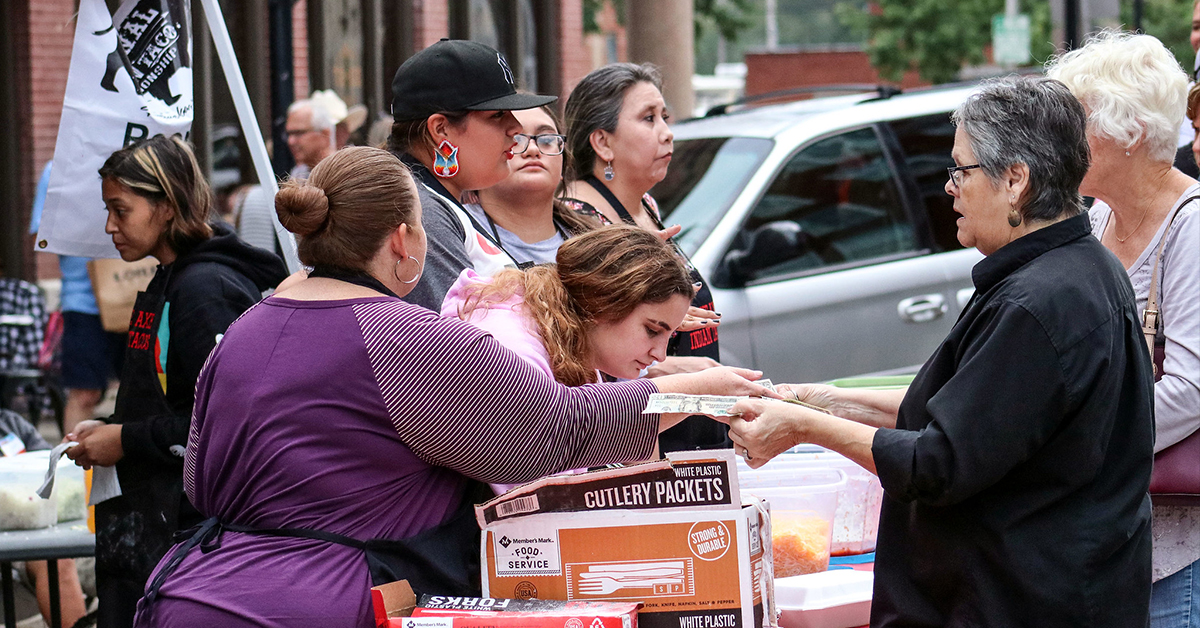 Photo caption: A photo from the 2019 National Indian Taco Championships show customers buying Indian Tacos from the Strike Axe cooking booth. The annual competition, which is usually held in October, is canceled this year due to the ongoing pandemic. Osage News File Photo

Frybread and Indian taco lovers will have to find another outlet for their next fix with the 2020 National Indian Taco Championship canceled until next year.

In August, the Pawhuska Chamber of Commerce announced on social media that it would not be hosting the annual cooking competition and food sale event, which typically draws hundreds of people to downtown each October. Participating contest entrants set up food booths on the blocked-off Pawhuska streets where people gather to eat, socialize, watch a powwow dance competition and visit other vendor booths during the event.

“COVID-19 and Indian Tacos just don’t mix! See you in 2021,” the Chamber announced on its social media platforms. The day-long event has been held on the first Saturday in October for the past few years.

The 2019 NITC marked the event’s 15th year in Pawhuska held on Kihekah Avenue just north of the Triangle Building, which is now the Frontier Hotel, as well as The Pioneer Woman Mercantile.

Each year, cooks and their helpers from various tribal and culinary backgrounds come to Pawhuska for the competition opportunity, which includes four cash prize places for the top winners.

In 2019, Ramona Horsechief (Pawnee) took first place and the Strike Axe cooking booth (led by Osages Marjorie and John Williams Jr.) took both second place and the People’s Choice award that year. Both are repeat event competitors who have won top places in past NITC years.

In addition to the Chamber of Commerce hosting, sponsors usually include the Osage Nation and Osage Casino. A contest powwow takes place with dancers competing for first, second or third in their respective categories.

Follow the “National Indian Taco Championship – Pawhuska” on Facebook for any further updates. The Pawhuska Chamber of Commerce is at (918) 287-1208 for event information and any other upcoming Chamber events.