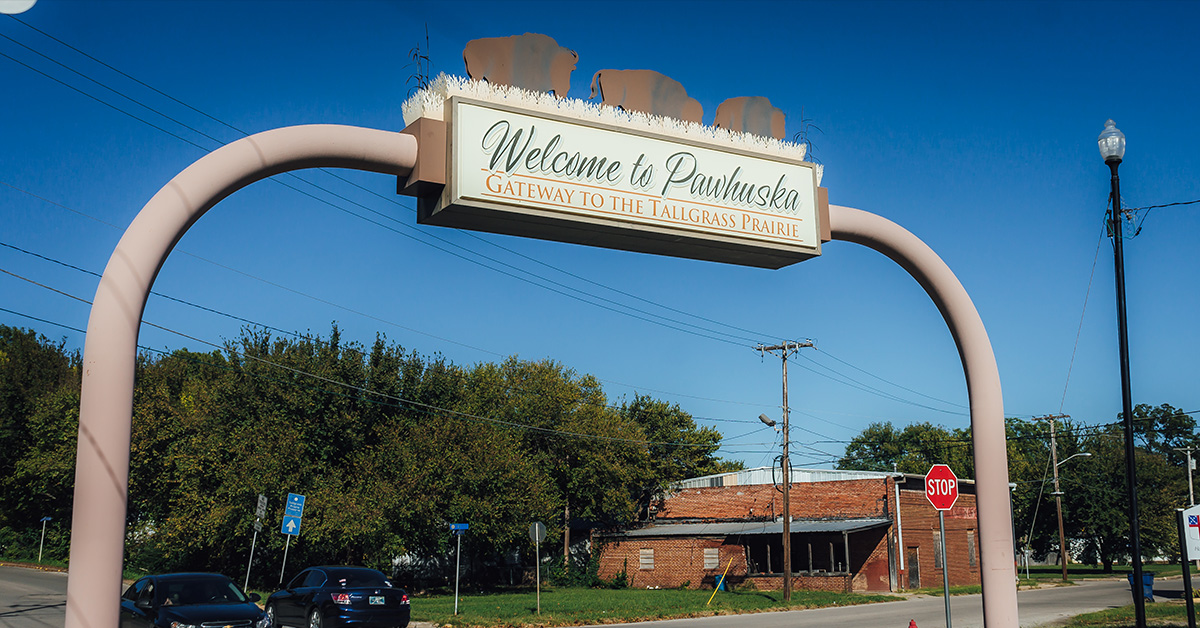 Osage Nation and city of Pawhuska collaborate on public Wi-Fi

Photo caption: A sign greets visitors to Pawhuska and the Tallgrass Prairie on Kihekah Ave. on Sept. 29. CODY HAMMER/Osage News

Public Wi-Fi is coming to Pawhuska, thanks to a partnership between the Osage Nation and the city of Pawhuska.

Through the use of funds provided to the Nation from the Coronavirus Aid, Relief, and Economic Security Act (CARES), a longtime dream to close the “digital divide” in Pawhuska is becoming a reality. The Wi-Fi project will begin in early October and be completed in late December.

“Osage Nation has looked for ways to build a system like this for many years; it’s just been hard to locate funding. The CARES Act provided the funds and Chief Standing Bear gave us the approval to make it happen,” said Robert Mark Kirk, the Nation’s Information Services director. “Additionally, I can’t overstate the importance of partnering with the city on this project. Without access to their infrastructure, building a network like this wouldn’t be possible.”

Kirk said the city has provided the right of way and free access to their utility poles, but it will be up to the Nation to build out the network and maintain it. The overall cost of the project is still unknown but as the project begins and continues, they will have a better estimate of costs.

In April, the Nation received more than $44.8 million in CARES Act funds and a COVID Task Force was formed to implement the money. According to the task force’s Implementation Plan, they earmarked $3 million to improve broadband in the county.

Phase one of the project will provide Wi-Fi to only certain areas of the city, Kirk said. The reason being is they need to test the range of the equipment they’re installing, and that equipment won’t arrive until the second week of October. He said the project has a hard construction timeline and they don’t know how much of the project will get completed by Dec. 30.

“The plan is to build as much as possible, but December is coming quickly. That affects both areas of coverage and overall cost of the project,” he said.

He said as time goes on and the Nation builds out more of the network, the coverage will improve.

“Building a broadband system is necessary for many reasons. Distance learning, business communications, and social interactions – the use of the internet supports our people’s work, education, entertainment, culture, language, and much more,” said Principal Chief Geoffrey Standing Bear in an ON Communications release. “Our vision is that the Osage people will be able to live here in our territory and access the entire planet with modern broadband internet. We can gain access to every kind of education that you can receive in a classroom. We can share knowledge and experience.”

The public Wi-Fi project is based on programs put in place by other municipalities throughout the country, according to the release. In communities where municipal Wi-Fi has been installed, it has become a valuable tool for both citizen engagement and tourism.

Kirk said the technology does have limitations and is not intended to be a replacement for a dedicated broadband connection.

“We still have a lot of work to do both here and in the rest of Osage County,” he said.