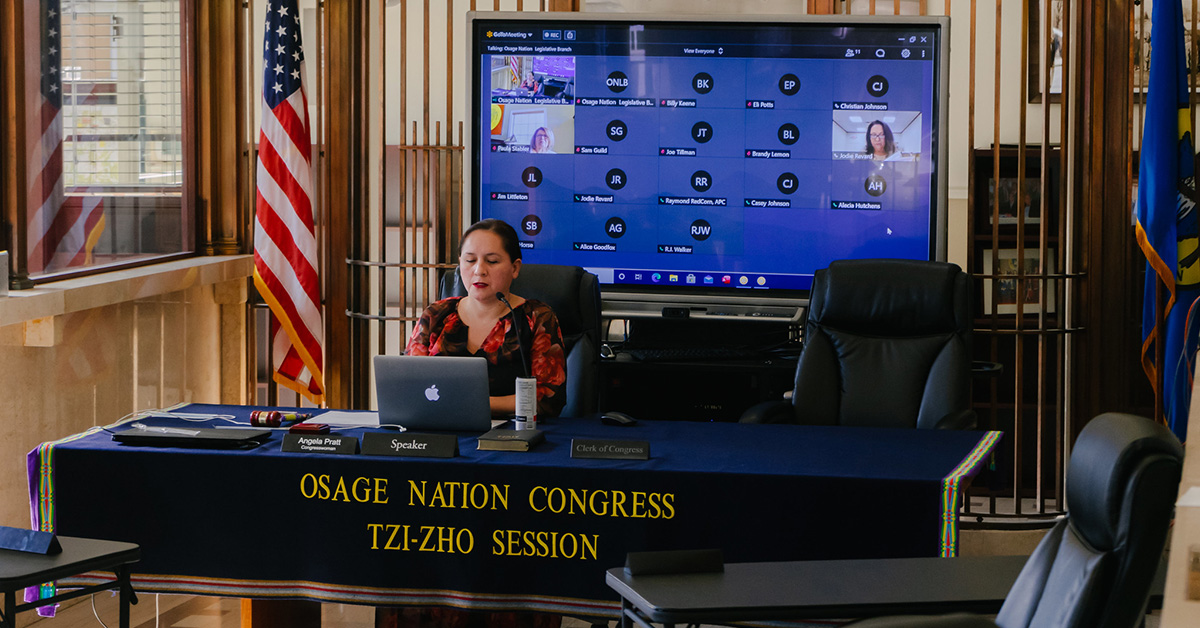 Photo caption: Speaker of the Congress Angela Pratt conducts the Tzi-Zho Session on Sept. 25, 2020, while nine members of Congress and members of the Executive Branch use GoToMeeting to participate in the session. CODY HAMMER/Osage News

With the COVID-19 pandemic stretching more than six months and continuing into the autumn season, Principal Chief Geoffrey Standing Bear shared updates on how the virus has impacted government operations as the 2020 Congressional Tzi-Zho Session started.

“The plans we put together in March and April have relied upon our leadership, employees, contractors and the Osage people to carry out,” Standing Bear said in his Sept. 8 opening session address to the Seventh ON Congress. “It is no exaggeration to say we have been blessed to have each other. The need for mutual support and communication has brought forth the leadership we need to move into the next generations. We did not let this virus derail our dreams for the future, everyone should be congratulated.”

With the virus still present in the United States, Standing Bear acknowledged: “We have experienced hard challenges since March, but have responded strongly to the adversity caused by the COVID pandemic. Nevertheless, great harm to health, life and the economy has occurred. We still do not know what this virus will do in the future, we do not know how federal, state and local governments will react next month or next year.”

As of Sept. 29, the Oklahoma State Department of Health reported a total of 86,219 positive cases of COVID-19. Statewide cumulative deaths reached 1,018 as of that report. In March, Oklahoma reported its first case of COVID-19 and by mid-month, an Osage Nation public health state of emergency was issued by Standing Bear and all seven Osage Casinos closed for nearly two months as precautionary measures.

“We closed the government buildings to the public and minimal staff worked on location, most employees worked from home, Osage Nation schools were closed … Today, months later, we are operating in a new environment which is sensitive to safety measures such as social distancing and the wearing of face coverings,” Standing Bear said. “Working with our Wahzhazhe Health Center, employees are regularly tested for COVID-19 and contact tracing procedures are followed. At the Osage Casinos and Hotels, we (re)opened in May with COVID safety procedures in place.”

“The (gaming enterprise board), the Osage Congress and the Executive Branch have responded to these challenges using all available resources – the drawdown from the Permanent Fund, use of the federal Paycheck Protection Program and many other measures have kept income at lower but manageable levels. Decisions were made to downsize the Osage government, Osage Casinos and hotels also made downsizing adjustments,” Standing Bear said.

As a result of the COVID-19 impacts on the Nation, Standing Bear, a former Congressman, acknowledged the newly seated Seventh ON Congress would face a challenging Tzi-Zho Session where the 2021 fiscal year government budgets would be considered.

“This Tzi-Zho Session will see tough decisions from each member of this Congress on appropriations to meet the needs of the Osage people not only in the next 12 months, but for many years to come. Decisions by this Congress will have lasting impact as you measure the projected revenue and the requested funding. Even then, should there be a COVID virus surge and the vaccination program fail, the casino and other revenue could stop again and this Congress and I would then meet to answer the questions our people will have – Primarily the question of: What are we going to do?”

Standing Bear added: “Despite all the difficulties, we have maintained full funding of our Osage Nation Health (benefit) card, Medicare Plan F, supplement, Medicare Plan D prescription program and our Osage scholarship fund, but further pressure is on us all to better qualify use of these funds. Health costs continue to grow everywhere at a rapid pace and Osage Nation is no exception. Our burial assistance program meets a part of the family needs, but for some of our traditional funerals more is needed to relieve the financial stress, which comes so suddenly and the amounts are a financial shock no grieving family should endure as the loss of a loved one is heavy already. And although our Higher Education Scholarship has remained steady in funding needs, costs are rising and more requests for graduate and professional school funding are being heard. The Congress and Executive (branch) must work together on these and other programs.”

Standing Bear also addressed the recent U.S. Supreme Court McGirt case, which received a ruling that the Muscogee (Creek) Nation Reservation in present-day Oklahoma was never disestablished by their allotment act or other federal laws. “Several questions will have to be answered, including what will be the effect of the McGirt case on the Osage Nation v. Irby case where the (U.S.) Supreme Court denied review of lower federal courts decisions which said the Osage Nation has been disestablished? Another question is: What is the effect of the McGirt decision on jurisdiction issues outside of criminal law, such as regulatory and taxation jurisdiction? Although, only one tribe (MCN), is part of the McGirt lawsuit, the other four of the Five Civilized Tribes see this case as applying to them. The effect of the McGirt case on the Osage Nation can only be determined by further court decision or federal legislation. This could have great benefit to the Osage Nation or bring great harm. We do know the way the Osage Nation handled the Osage Nation v. Irby case is a model of how not to do a case like this. This will be very difficult and to tackle this issue, the (ON) Attorney General has a team of attorneys which, in my opinion, are the best to take on this challenge for (the Nation).”