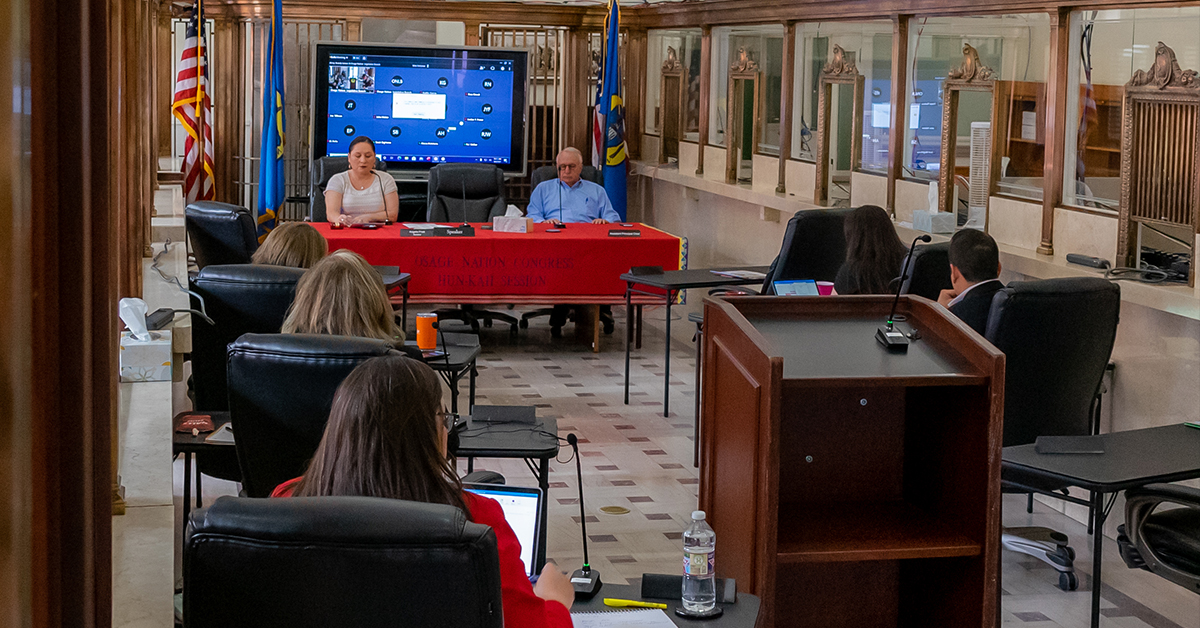 In preparation for the 2021 Osage Nation Congressional Hun-Kah Session, members of the Seventh ON Congress filed various bills and resolutions to be considered by the Legislative Branch.

The spring legislative session started March 29 and stretches 24 days as one of two annual regular sessions that are mandated in the 2006 Osage Constitution.

Throughout the session, the bills and resolutions will be subject to consideration by the 12-member Congress at the committee level first, including any possible amendments, before it is passed onto the entire Congress for final action and any further amendments per affirmative committee vote. As of March 29, the following bills and resolutions are among those filed for the session:

- ONCA 21-18: An Act to amend the annual salary of the Principal Chief and the Assistant Principal Chief in accordance with Article VII of the Osage Nation Constitution (sponsored by Congresswoman Alice Goodfox).

If passed, the amended Executive Branch office salaries will not take effect until after the June 2022 election when both office seats will appear on the ballot. The salary increases would take start on July 5, 2022, if passed.

- ONCA 21-19: An Act to amend the Matching Grant Fund in Osage law to authorize up to 40% match expenditure on intergovernmental grants for municipalities serving Osages(Congressman Eli Potts).

- ONCA 21-20: An Act to establish a legal assistance program for Members for the Osage Nation (Potts).

- ONCA 21-22: An Act to amend the Economic Development Fund in Osage law to authorize small business loans eligible for forgiveness out of the Fund to Osage-owned businesses (Potts).

- ONCA 21-29: An act to amend Osage law to change the qualifications for the Nation’s Treasurer (Goodfox).

- ONCA 21-30: An act to amend Osage law to change the definition of Health Board (Congresswoman Paula Stabler).

- ONCA 21-31: An act to establish a structural and procedural framework for a new ON Health Care System (Stabler).

- ONCA 21-32: An act to authorize and appropriate $1,500,000 to the Osage Minerals Council for the purpose of acquiring electronic storage equipment for historic oil and gas records, to make those records accessible to the public on a website and to contract for/ hire professional services associated therewith (Goodfox).

- ONCA 21-33: An act to authorize and appropriate $400,000 to the Capital Asset Fund for improvements to the Skyway North Hanger (Congresswoman Pam Shaw).

- ONCA 21-34: An act to authorize and appropriate $50,000 as a contribution to the Francois Chouteau & Native American Heritage Fountain (Congressman John Maker). According to the bill, the Heritage Fountain is seeking contributions toward the construction and maintenance of a proposed park and memorial fountain in Kansas City in honor of French trader Francois Chouteau and the area Native Americans when they established a trading post in 1821.

- ONCA 21-36: An act to amend ONCA 20-76 to provide a supplemental $50,000 appropriation to Financial Assistance Services for crisis assistance (Goodfox).

- ONCR 21-03: A resolution to establish a commission to study and report its findings on the issues of cultivating hemp for textiles purposes and marijuana for both medical and recreational purposes (Potts).

- ONCR 21-05: A resolution to request the ON Gaming Enterprise Board to submit a plan to increase wages by September of 2022 (Potts).

During the session and committee meetings, Congressional public meetings (except executive sessions allowed by Osage law) will be live-streamed at www.osagenation-nsn.gov/multimedia/live-media

Copies of filed legislative bills and resolutions, as well as Congressional meeting notices and agendas for sessions are posted online to the Legislative Branch website at: https://www.osagenation-nsn.gov/who-we-are/legislative-branch